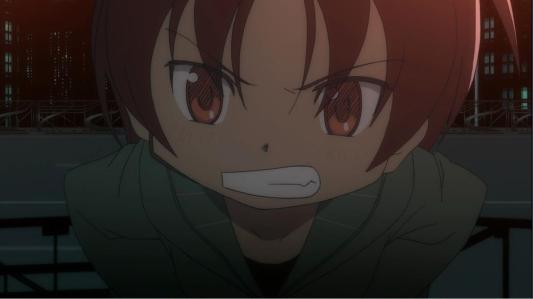 Everywhere I look (probably 1-2 sites), I always hear about how evil Kyubey is and how wonderful Homura is.  After episode 6, I’m beginning to lean the other way.  In fact, I’ll argue that Kyubey is not evil and Homura really isn’t all that good, either. 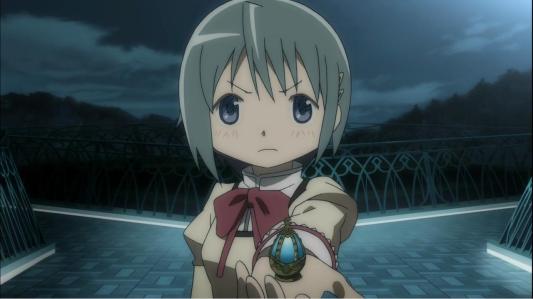 It’s been well established that the soul-seizing, schoolgirl-stalking Kyubey is up to no good.  After all, he’s seen constantly pushing Madoka and Sayaka into making a contract with him, ultimately ending up as slaves in an endless cycle of sorrow and seclusion.  He certainly is deceitful in his methods, as we learned in episode 6, when he sorta forgot to explain certain terms of the contract.  Yeah, from the way it sounds, Kyubey is an awful, awful animal… thing?  I’m not sure what he is but the question is: is Kyubey evil? 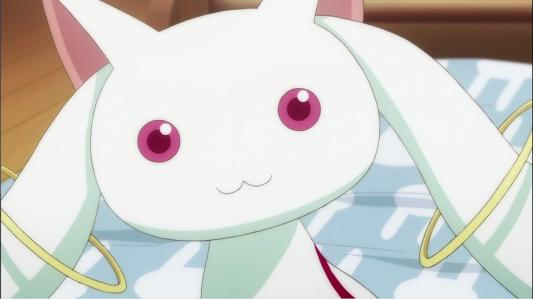 I don’t think Kyubey is evil. Well, not in the sense that everyone else seems to think, that is.  Yes, he is immoral and shady, but he is recruiting Puella Magi to fight off witches which just so happen to prey on humanity.  So far, only one Puella Magi (Kyoko) seems to not care for society, whereas Mami, Homura, and Sayaka have all saved people’s lives.  Someone needs to take this job and so far, three of the four examples have actually helped society.  We would also safely assume that Madoka, as a Puella Magi, would greatly benefit society as she has that untainted sense of justice and general kindness about her.  With her absolute and untouched potential, Madoka would be a great protector of her metropolis.  So it looks like humanity, at least in this anime, is on Kyubey’s side. 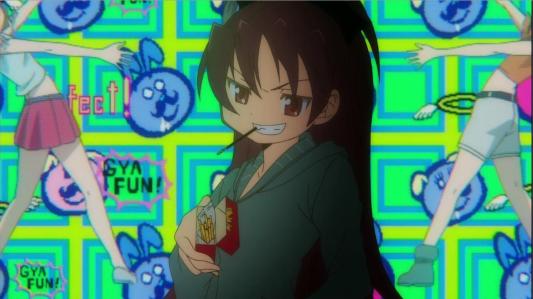 Homura also mentioned that an almighty witch, Walpurgisnacht, will be arriving in the metropolis in one week’s time from whatever date this episode takes place.  Kyubey probably knows this, too, being the deceitful slime that he is.  Well, that’s all the more reason why he’s so desperate to contract with Madoka, who, again, has been repeatedly hailed as the potential Puella Magi with the most talent and tastiest soul strongest magic.  Getting her on board would certainly make that fight safer for the other Puella Magi and the metropolis, as well.  I wouldn’t say he’s looking out for the well-being of the other Puella Magi, especially with what happened to Mami, but I would say that what he’s doing would ultimately benefit the other girls, at least considering this upcoming battle.  While indirect, Kyubey’s goal will provide more safety and longevity to the other Puella Magi. 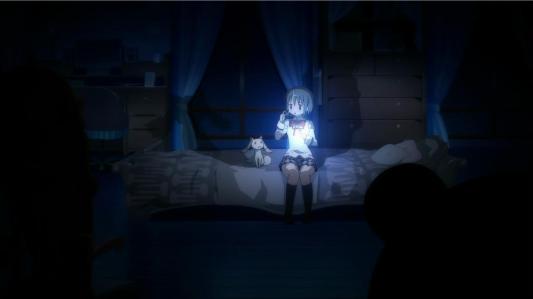 I think people are confusing evil with being unethical.  I won’t argue against that.  Kyubey is a selfish, dishonorable, loathsome creature whose main goal is fulfill his own needs.  I certainly don’t like him.  But I don’t see Kyubey as an evil character.  An evil Kyubey would simply force himself upon the girls into giving up their souls.  But no, he’s giving the girls a choice on their fate and a wish as a signing bonus, too.  In Mami’s case, it was either die alone and in pain or become a Puella Magi and perform essential deeds to society.  Both Mami and Kyubey get what they want in the end: Mami gets a new life and Kyubey gets a Puella Magi.  It just so happens that the occupation these girls choose is to become zombies who wander the world searching for witches to allow them to survive for another fight.  If I had to say that something was evil, I’d say it is the career of Puella Magi itself, not Kyubey.  Unfortunately, I doubt there is much Kyubey can do that will dispel the evil label he has come inherited.  Oh well.  And now onto Homura. 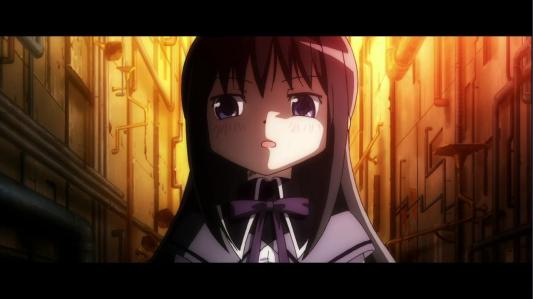 Naturally, when we see conflicting sides, we tend to assume they’re opposites.  As the general population assumes Kyubey is wicked, we’ve come to grown fond of our heroine, Homura, who appears out of nowhere to save Madoka’s soul.  What a kind-hearted child.  She’s making sure our innocent protagonist can keep her soul and stay out of the regretful occupation, Puella Magi.  But wait, what about Sayaka?  Homura did absolutely nothing to sway her away from being a Puella Magi.  It’s hard to say that Homura is pure when she allows others to make contracts when she is working so hard to prevent contracts for one girl.  Homura is only looking out for Madoka and that’s evident because she only appears whenever Madoka is about to make that fateful contract.  But what about saving Sayaka’s Soul Gem?  Well, you could assume the extremely emotional Madoka would sign her contract to prevent the death of her best friend, especially since it was she who foolishly attempted her murder to begin with.  In fact, I would argue that Homura would have ignored Sayaka in her fight again Kyoko had Madoka not been there.  Madoka’s almost-wish is the reason why Homura stepped in and saved Sayaka in the 5th episode.   At least that’s how I see things.  Homura playing favorites with souls certainly doesn’t make her a good person.  But at least she’s saved Sayaka twice. 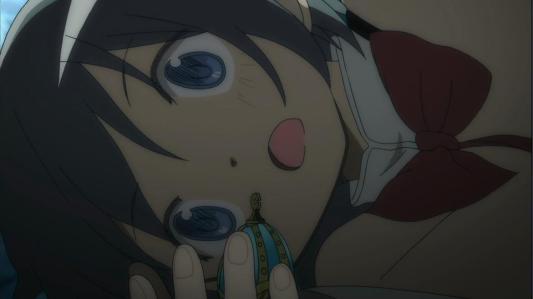 Another thing that I’ve noticed since Mami’s unfortunate demise is the lack of Kyubey-killing which Homura partook in the first episode.  With Mami out of the picture, what is preventing Homura from killing Kyubey and ending any future contracts from being made?  Sayaka is a wimp as a Puella Magi and Madoka has no fighting abilities, so those two girls are useless as shields for that fluffball.  If Kyubey is so evil, then she should resume the newly sanctioned sport of ‘Kyubey-bashing’ (I think we’ll all watch that).  But she hasn’t.  There’s probably a reason why, but until we find out, I’m going to assume it’s because it’s not in her relevant scope of things, right now.  She was prepared to kill Kyubey in the past but something has changed.  Hopefully, we will find out, but I doubt we will anytime soon.  And this really isn’t a fault against Homura for being a good person, but it leaves me with a muddled feeling.  She’s doing these things for her own reasons.  And her main reason for meddling in Madoka’s life is to prevent the contract from completing.  You could say these selfish actions mirror those that Kyubey, the creature whose sole purpose is to contract Madoka now.  So while Homura is a good character, saving Madoka countless times, she isn’t entirely good.  It just so happens that her motives have resulted in mostly good actions.

In the end, I still dislike Kyubey and like Homura.  Kyubey’s personality has many problems and the way he approaches his job as a recruiter leaves me with an ill feeling.  Homura’s role as Madoka’s protector makes me happy, especially since no one else is trying to save Madoka’s soul from the perilous adventure ahead.  But I think the overwhelming majority of opinions have polarized each character as being ‘evil’ and ‘good’.  I just don’t see things that way, especially after episode 6.  Perhaps that’s me wanting to pick up an argument to see what I can learn from it, but I feel that Kyubey has some goodness to him and that Homura has some faults.  At least that’s what I learned from that.

One note I want to add in is that Madoka’s mom is the only character who can make Madoka smile.  The whole 6th episode shows Madoka depressed, except when her mother gives her some questionable advise.  Still, it’s nice to see there’s one character looking out for Madoka’s welfare.  And who doesn’t like Madoka’s smile?

One other note, and this is the most important piece of the whole post: the sound Madoka makes when she’s throwing Sayaka’s Soul Gem off the bridge is absolutely adorable.  I strongly recommend going back to that scene and listening to it again and again and again. 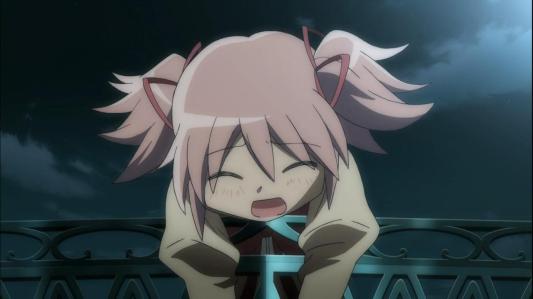 This entry was posted on February 12, 2011, 12:18 AM and is filed under Anime, Puella Magi Madoka Magica. You can follow any responses to this entry through RSS 2.0. You can leave a response, or trackback from your own site.