What would Mami do if she were still around?

Well, there goes Sayaka and Kyoko, off to become Kyubey fuel or whatever happens to their souls once they ‘die’.  Poor things.  They really didn’t need to die, not now at least.  All Sayaka needed was some coaching and something to help her sustain her idealistic lifestyle of serving society by letting her cleanse her soul gem by using someone else’s (someone else who shares the same virtuous guidelines) collected grief seeds.  Hmmm. Doesn’t that sound like the perfect spot for Mami?  Or does it?

Yeah, I can’t help but things are different without Mami around.  After all, Mami was the inspiration for Sayaka’s romance with justice and selflessness role as a Puella Magi.  It’s partially Mami’s fault for building up the hope that Sayaka could one day become someone like her.  But if Mami were around, don’t you think Sayaka would’ve faired differently?  Mami would be able to help steer Sayaka down the correct path.  She would be able to survive as a Puella Magi, being able to hunt witches together until Sayaka was strong enough to defend society on her own.  And during this maturation phase, Mami would be able to instill some common sense into Sayaka so she wouldn’t rely on her pride and arrogance the whole damn time.

But what’s to say Mami would be the same after all these events?  Had Mami learned about the truth of Puella Magi, how might her personality and perspective changed?  She was pretty lovey-dovey with Kyubey in the few episodes we saw of her, so maybe she would’ve handled the whole situation differently than the others.  Maybe or maybe not; it’s hard to say.  It would’ve been interesting to see which side Mami would’ve chosen once she learned that she was a soulless zombie wandering the Earth only delaying the inevitability of becoming a witch.  It’s too bad she had to die so early on in the series, since she was such an inspiration to Madoka and Sayaka.  I would’ve liked to see Mami learn everything there was to being a Puella Magi, but I guess that wasn’t to be. 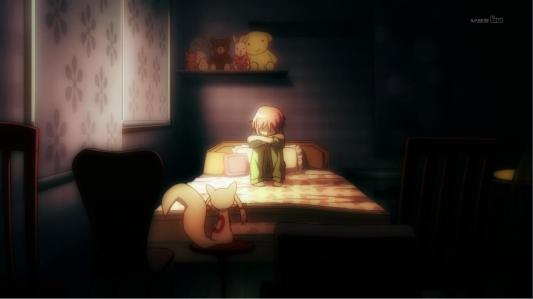 Anyway, the cast has been greatly reduced, only featuring our adorable protagonist, Madoka, a stubborn, time-traveling Puella Magi, an energy-friendly, wish-granting rat, two of Madoka’s more boring classmates and Madoka’s family.  There’s been that black cat in the opening sequence and in some of the official art that has yet to be introduced.  Wonder what that’ll amount to.  And then there’s Walpurgis, who is likely the witch we saw in the first scene of this anime.  It’ll be interesting to see how the screentime is distributed in the final episodes, given that only three of these characters are major and Walpurgis, once it appears, will take up a dominate spotlight until it either destroys or is destroyed.  Guess we’ll get Homura’s backstory, her wish, and an insight into her actions in the near future, but I’m not sure how the rest will play out.  Anyway, the series has my attention and I’m looking forward to what happens next.

Also, one thing that bothers me about the series is Madoka’s apathy toward things going on.  She’s been introduced to this concealed, mystical world where magical girls slay witches in order to protect society and survive in this dangerous game.  She’s also met someone who time-traveled from the future to protect her life and some animal-thing who wants to harvest her soul for unrivaled energy production.  And she just comments about her uselessness, goes to school, and worries about her friends.  Wow.  Imagine all you could learn and do with these connections.  But she doesn’t seem to care at all with what’s going on, unless it’s Sayaka-related.  She doesn’t care about Kyubey’s existence and purpose, Homura’s abilities and actions, or anything about these witches and Puella Magi who fight to save society from catastrophe.  It’s like these situations are commonplace to her.

Personally, she should just follow Homura around, bet on things with Homura’s knowledge, become rich, and tell Kyubey to screw-off and use the sun for energy or whatever.  I mean, if you’ve figured out how to turn girls’ emotions into spaceship fuel or whatever, you should probably know how to harness the energy of an uncontrolled fusion reaction in space.  And I can guarantee that you’d get more energy, and a constant source of it, compared to this foolish system.  Or maybe Kyubey just likes being a dick.  That would explain a lot, actually.

This entry was posted on March 5, 2011, 7:38 PM and is filed under Anime, Puella Magi Madoka Magica. You can follow any responses to this entry through RSS 2.0. You can leave a response, or trackback from your own site.