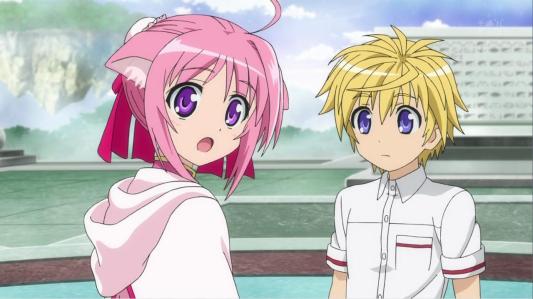 I never thought I’d use the words ‘light-hearted’ or ‘adorable’ to describe a war but Dog Days certainly makes that feat easy.  The first episode of kemonomimi anime Dog Days wasn’t anything spectacular or noteworthy, but it presented itself well.  And it did what it needed in order to set up the characters, the surroundings, and the scenario for an entertaining and cute anime that virtually anyone can enjoy. 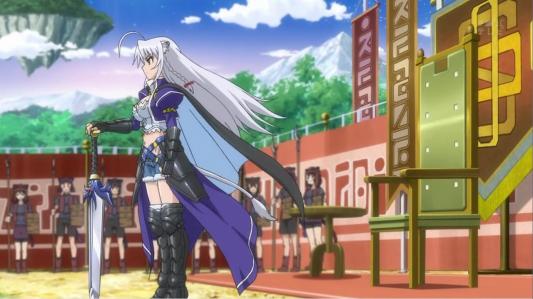 Dog Days starts out near the end of a war between the neighboring countries of Biscotti and Garrett.  Garrett, carrying all the momentum, is preparing for the final siege on Filianno Castle, the stronghold where Princess of Biscotti, Millhiore, resides.  After meeting with the other higher-ups in said castle, Millhiore prepares to use their last resort and summon a hero.  Cut to Japan where middle-schoolers Shinku and Becky are preparing to go to class.  Generic school scenes happen until a mysterious dog wielding a decorated dagger opens a gate to the fantasy world where the story and adventure await.  Upon arrival, Shinku meets Princess Millhiore and introduces him, and the audience, to the current situation.  She summoned him to be the hero for her nation and lead their army to victory.  But then here comes to curveball…

Yeah.  Despite everything else being a pleasant blend of fantasy and feudal Japan, there’s a set of commentators broadcasting this battlefield to various spectators across the region.  Oh, and the battlefield is apparently a variation of Ninja Warrior (or Sasuke in Japan) with some actual warfare and powerful super-warrior attacks, too.  And when someone gets hit with a weapon or is injured or whatever, they get turned into an unbearably cute, miniature animal-thing that is mobile through the repeated bouncing of its round body.  So, yeah, this anime is certainly light-hearted.

But I don’t have a problem with the show being light-hearted and adorable.  That’s kinda what I was expecting from the synopsis and character designs when I first heard about the anime.  It’s reminiscent of Final Fantasy-type JRPGs where characters faint and restart at their last save instead of dying.  In fact, the mobile birds and hordes of animal-eared warriors reminds me of Final Fantasy XI (chocobos and Mithras).  It also reminds me of Utawarerumono with the kemonomimi armies battling like its feudal Japan (except that series actually had death in it).  So it already reminds me of two things from 2006 which I have fond memories of.  But it’s not vital for you to understand how my memories have affected my experience of the anime.  Instead, let’s focus on how the anime actually was.

Dog Days never had anything spectacular or noteworthy in the first episode to separate it from the throng of Spring anime this season.  But that’s not worthy of demerits or any negative press.  Instead, it was a solid episode which provided a chance to introduce all the major characters of the story, develop the important features of this fantasy realm, and launch the rather simple plot all while being cute and lightly comedic at the same time.  It’s fortunate this anime won’t try to be unnecessarily complex with its plot, its mechanisms, or its characters because that usually can distract the audience and detract from the experience.  Dog Days is meant to be something fun and enjoyable, a trait that seems to be underappreciated and underrepresented, at least in my mind.  It’s not going to be anything magnificent or marvelous but Dog Days is well-structured for what it wants to be.

One feature about the militaries in Dog Days that gave me a chuckle was how bland and generic the soldiers looked.  They’re virtually featureless and indistinguishable from one another while the actual cast are well-defined and possess personalities.  I ponder if that when they join the military if they’re predestined to being a leader or a grunt based on their appearance.  If you’re a carbon-copy of the average citizen, then there’s zero chance of becoming an officer.  Furthermore, I wonder if the citizens of these nations are all as dull and nonspecific as the common soldier.  I’m really looking forward to actually exploring the world and learning about the people (animals?) and their cultures and what their everyday lives are like.  Fractale never satisfied me with that experience, so I’m hoping Dog Days does an approvable job of developing the setting as a believable fantasy world.

This entry was posted on April 2, 2011, 6:54 PM and is filed under Anime, Dog Days. You can follow any responses to this entry through RSS 2.0. You can leave a response, or trackback from your own site.