We’re all going to have a lot of memories from Madoka.  Some will be sorrow.  Some will be pleasure.  Others, too, will be fright and confusion and heartbreak.  If you recollect, the series took our emotions on an unexpected journey, able to manipulate our feelings into whatever this anime wanted.  But which of those emotions on this journey will you remember?  What memories will you have from Puella Magi Madoka Magica? 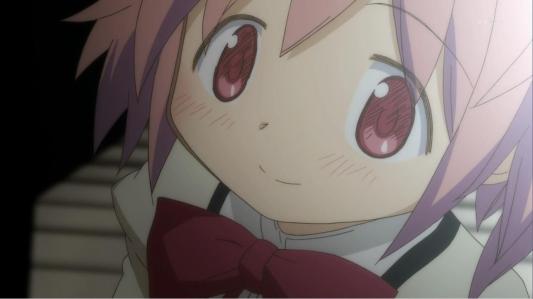 When I reminisce about Madoka, my mind drifts toward the tenth episode, which was probably the most significant and enjoyable one of the series.  It was able to clarify the story, network the various episodes together, and provide it all in an entertaining backstory for one of the major characters in the series.  We finally learned what her goal was and learned about all the sorrow she faced as she tried to save her hero, the powerless Madoka.  It also provided us some time with every character in the series through the various timelines, which was another factor, I believe.

But I’ll also remember this episode.  The eleventh episode provided further explanations and provided a momentous build-up to the finale.  Emotions were through the roof in this episode, with Homura finally able to confess to Madoka what she’s been doing for this undefined amount of time.  In addition to that, Homura was gradually losing hope and had to face Walpurgis Night alone, an encounter she had no chance of winning.  I think the most memorable scene from this episode was Homura’s battle with the colossal witch.  But it wasn’t the most memorable scene of the anime for me.

If I had to pick a most memorable scene from Madoka, I honestly would pick the time when Madoka threw Sayaka’s soul gem off the bridge.  Seriously, that’s what I remember.  But there have been other memorable scenes, too.  Obviously the Mami scene in episode 3 comes to mind, but her fight in episode 2 was rather spectacular and elevated the show in a lot of people’s minds.  Another of my favorite scenes involved Kyubey in the eighth episode.  The moment when Madoka was wishing to become a Puella Magi, Kyubey suddenly was full of bullet holes and collapsed.  I don’t remember my initial reaction to that scene besides shock, rewind, and awe, but it was a rather enjoyable moment, seeing the menacing creature finally die.

The eleventh episode provided some rather remarkable developments, especially regarding the story.  Kyubey explained why Madoka became as powerful as she did, through Homura’s reversal of time revolving around saving Madoka.  We also had some development between Madoka’s teacher and Madoka’s mother as they discussed what’s happening to these girls.  I rather enjoyed that scene since it was one of the few times we saw other affected by this depressing set of circumstances.  We also saw Kyubey finally convince Madoka to become a Puella Magi while in the evacuation center.  Overall, these plot development are what make this episode one of the more memorable ones in the series for me.  Or rather, will be, when I start reminiscing about this series sometime in the future.

Outside of the anime but related to it, I’ll remember all the theories everyone came up with.  What was fun about Madoka was reading everyone’s thoughts and opinions on everything that happened and what they predicted would happen in the future.  Almost all these theories were proven wrong (including all of mine) but it was fun to formulate our thoughts and test them out against others.  Sure, Mami did die in the third episode and the anime did not progress like a Shakespearean tragedy but these thoughts and ideas made it all the more enjoyable when watching Madoka.  And with that are most of the significant memories I can think of from Madoka, at least for now.

One thing I won’t have memories of will be the wait between the tenth and eleventh episodes.  This month certainly lessened my enthusiasm over Madoka, at least until I watched these episodes.  And while this period was rather unnecessarily long, it never damped my enthusiasm for Madoka.  My focus simply turned from Madoka to other projects, both anime and not, until it was finally time for the show’s finale.  But I won’t remember this long period of time between episodes.  Some might.  It was a rather significant part of the series, although inadvertent.  But as long as it did not dampen my enjoyment of the show, then that wait was rather insignificant for me.

Finally, one final memory I’ll have of Madoka will be the music.  Music is one of the best sources of reminiscing I have and I often use it to remember seemingly forgotten video games and anime.  I have a playlist with all the openings to all the anime I’ve watched and will sometimes play that while doing whatever.  Some of those openings bring back great memories while others do little more than make me shake my head in a pleasant manner.  But the background music of Madoka will do something more.  I’ll be able to remember the atmosphere, the scenery, the character’s voices, and the story.  Music truly is one of the greatest tools when one wants to recollect their memories.  But even with it, I won’t have trouble remembering Puella Magi Madoka Magica.

This entry was posted on April 22, 2011, 12:01 AM and is filed under Anime, Puella Magi Madoka Magica. You can follow any responses to this entry through RSS 2.0. You can leave a response, or trackback from your own site.