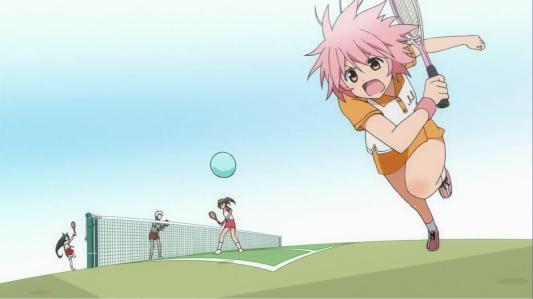 This may be difficult to believe but there were actual tennis matches in the sixth episode of Softenni.  Mind-boggling, I know, but it actually happened.  And that’s why it has been the best episode to date.  With more tennis matches set for future episodes, the series will certainly improve, at least for me. 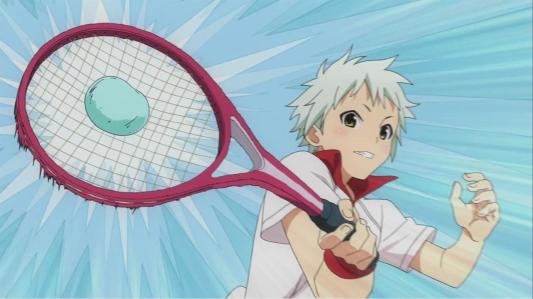 This is the style of episode that I had hoped for when for with Sofuteni.  Granted, I knew there would be heavy comedy and ecchi elements throughout the series but I would’ve expected more tennis at this point.  Finally, the soft tennis club at Hakuou Middle School got around to playing tennis another school to showcase how talented and how motivated our regular cast is for playing the sport they love.  Facing off against Akadama Middle School, there were plenty of opportunities for the anime to focus on distinct sets of characters and provide time for them to play tennis, make jokes, and bond with each other.  If only more episodes of Sofuteni were meaningful like this one.

One of the better aspects of this episode was placing Asuna and Kotone in a somewhat critical situation.  During their doubles match, they were struggling against better opponents in Sumino and Seriha.  The Akadama Middle School pair employed tactics, strategies, and were all-around better players.  With our dimwit Asuna and hothead Kotone both under pressure, now was the perfect time to see respond to some adversity.  For the first time in the series, we saw the girls turn serious.  And with that, they overcame their hardships rather easily.  It was fantastic to see the characters become serious and I can only hope to see more scenes like that in future episodes. 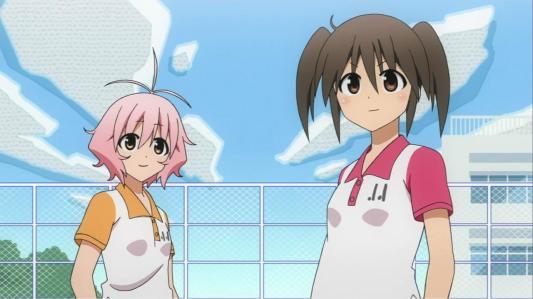 The animation of Softenni has been a disappointment but there were some thoughtful scenes in this episode to provide hope for future ones.  Although most of the tennis-scenes were between serves, there were several incidences of actual animated rallies with the girls running, swinging, diving, and whatnot.  Most of the scenes in previous episodes seemed to have the girls petrified in place with only a few scenes showing off kinetics and movement.  I realize Softenni has a rather modest animation budget but for a tennis anime, I had hoped to see more animation during the tennis scenes.  The sixth episode had some decent animation, meaning there’s hope for future matches to feature animated girls running around playing tennis instead of just standing and talking like previous episodes. 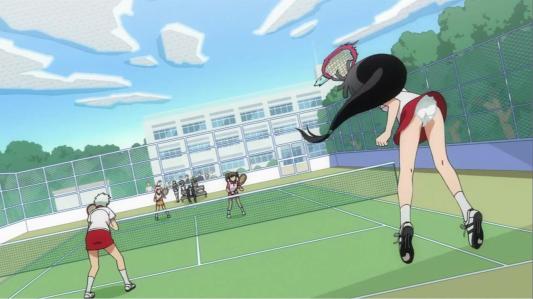 However, with the sudden invasion of tennis in Softenni, some of the other features had to suffer.  Thankfully the ‘romance’ was nearly non-existent and the ecchi scenes were reduced to one major and a dozen minor pantyshots.  The comedy existed relatively unharmed and was above-average, especially given the serious atmosphere of the episode.  You won’t hear me complaining about these recent developments.  Having tennis and comedy take the forefront of the episode are certainly the points that have made this one my favorite episode of the season.  Unfortunately I doubt the series will continue in this trajectory but at least there’s hope for future episodes revolving around tennis matches rather than Asuna’s vivid imagination and a frustratingly clichéd love-triangle.  Hopefully we see more episodes like this one to finish off the anime, ones that focus on tennis and comedy rather than ecchi and “romance”.

One thing I will admit is that I love Asuna’s big, dumb smile.  She’s always so happy and cheerful and optimistic, you can’t help but become infected yourself with her rather cute facial expression.  There’s just something about that smile that makes me smile when watching Softenni.  Maybe it’s her genuine love for tennis or her friends or whatever but it is one of my favorite components of Softenni.  It’s got to be her optimism and motivation that compels me to feel joyful, so I’m always in a good mood after watching the episode, even if it does leave a bad taste in my mouth.  Regardless of what happens in future episodes, I hope to see even more of Asuna’s big, dumb smile.

This entry was posted on May 18, 2011, 12:34 PM and is filed under Anime, Softenni. You can follow any responses to this entry through RSS 2.0. You can leave a response, or trackback from your own site.