There are a ton of things that impressed me when I watched the first episode of Usagi Drop.  I’m already heavily invested in that modest, yet striking art style for both the scenery and the characters.  And when the art is sometimes limiting, the voice acting for the characters does a proper job of bringing out their emotions.  The storytelling, partially switching between Daikichi’s conscious and general observer, really puts us in his perspective for the series, giving us the opportunity to see Rin through his eyes and mind.  The music has been appropriate and delightful, too, and you could imagine I could go on for another thousand words about all the aspects I love from watching this one episode of Usagi Drop.  But what I am most mesmerized with is the absolute God-tier level of animation in Usagi Drop. 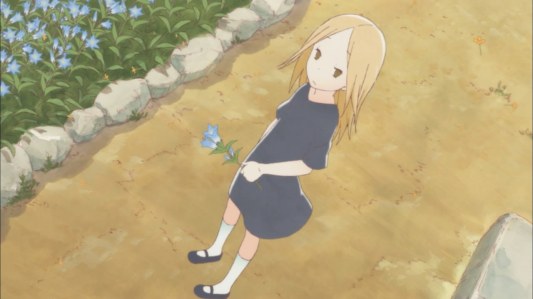 Animation, to me, is the most impressive and praise-worthy aspect that I saw in Usagi Drop.  But now I have to be careful and define what I mean by animation.  Certainly there will be some out there who have a different opinion and thusly, a different conclusion on the quality of animation, so I need to state my interpretation before I get too far or make any other ridiculoulsy bold statements.  To me, animation is solely defined as the movement or kinetics in an anime.  I consider every other visual aspect to be a part of the art, such as scenery, character design, clothing, props, special effects, etc.  Animation is how all those pieces of art move. 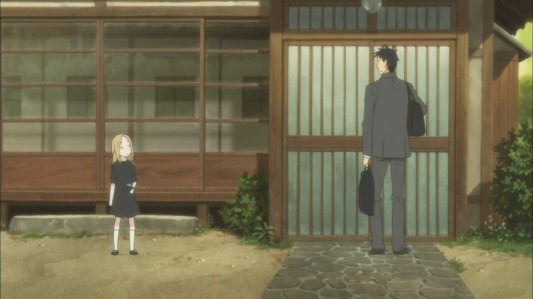 And there are two ways to amaze me when considering animation.  One is through excellent choreography, such as during major fights or when the camera is moving around, aiding to the dramatic significance of a scene, and smooth motion through such scenes.  Usagi Drop didn’t have those elements, so onto the other method.  Constant, or at least frequent, movement by characters, props, hair, you name it.  And that is what Usagi Drop featured, definitely more than any other anime in this young season. 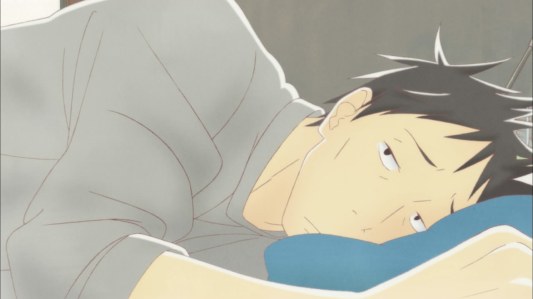 The first few scenes were what caused me to immediately notice the animation.  In virtually every shot, something was moving, most commonly Daikichi making his way to his grandfather’s funeral.  Most motions were simple such as rolling in bed, opening a door, or walking down a hall (away from the camera).  But what impressed me is that after a few shots, motions like these were captured and even more complex ones followed.  What a treat!  It’s a pleasure to see the characters animated in this anime. 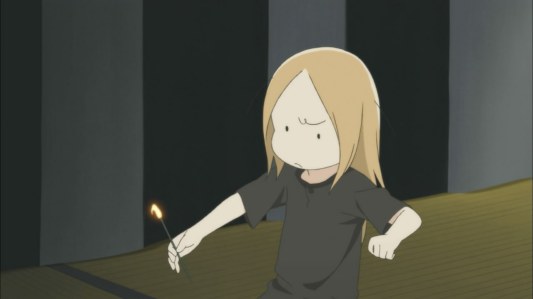 In lower quality animation anime, these scenes would be altered to hide the deficient animation ability by showing a wide shot of the bedroom with a smaller character (and thus smaller motions) rolling in the bed or taking a side shot of a character walking down the hall and cycling it when one step had been animated.  Now I’m not saying Usagi Drop is perfect using a few of these scenes itself and later scenes features the family sitting around and talking while barely moving (all anime do these things) but the constant level of detailed motion and kinetics simply blew me away.  And I’m hoping it stays at this level for the remainder of the season.

Anyway, onto the recap.  The first episode of Usagi Drop revolved entirely around the grandfather’s funeral.  Daikichi, a 30 year old, single man who lives alone travels to his grandfather’s home one fine morning to attend the upcoming funeral.  Before entering the home, he sees a young girl in the garden.  Thinking not much of it, assuming it’s a relative’s child, he goes into the home and finds his mother cleaning dishes in the kitchen.  It’s there when he learns the girl he met, Rin, is his grandfather’s illegitimate child (as well as his aunt).  The day goes on, Daikichi reunites with his family and they spend time together while preparing for the funeral the following day.  Over the course of the day, however, Daikichi can’t help but notice Rin doing everything unaccompanied, be it lighting incense, wandering around the home, and most of the time, sitting quietly alone.  Daikichi spends some time with Rin, such as allowing her to sleep on his hand during the night.  The following morning is the day of the funeral and, after the ceremony, the family is placing flowers on the body.  After everyone has finished, Daikichi invites Rin to place a flower on her father’s resting body.  Dissatisfied with the flower present, Rin scampers into the garden to pick blue bellflowers, her father’s favorite flower, and places them on her deceased father’s body.  She then cries.  After some time passes, the family begins wondering what to do with Rin, seeing as her father just died and her mother abandoned her.  With everyone citing reasons not to bring her in and succeeding a suggestion to send her to an orphanage, Daikichi assumes the role of caretaker and invites Rin to come live with him.  Following that touching moment, the two wake up together in Daikichi’s home.  There’s a rather cute scene afterward where Daikichi and Rin have breakfast together, in which Rin makes Daikichi a rice ball.  And that’s it for the first episode of Usagi Drop and the beginning of the abnormal family of Daikichi and Rin. 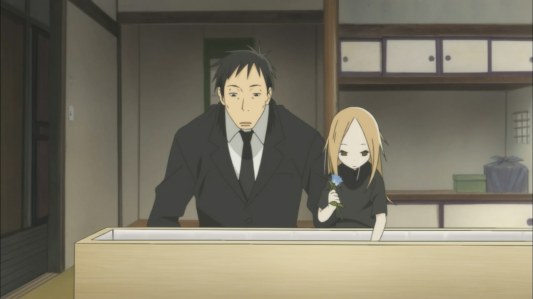 After doing some basic research and watching all the PVs that came out for this anime, I felt this episode had no surprises and matched, if not exceeded, my inordinate expectations.  It had everything I thought it would beginning with Daikichi living alone and without any knowledge of Rin but ending up the episode together as a new family.  Considering how this first episode focused on Daikichi meeting Rin and taking her in, I feel this will be one of the more unique episodes of the series seeing as everyone one here after will show Daikichi and Rin living together.  So I’ll hold off my thoughts on the story since every episode will have a different format, pacing, and story, but this first episode was done exceptionally well and was thoroughly enjoyable.  It did what it needed to by starting the story successfully and creating its desired atmosphere for the rest of the series. 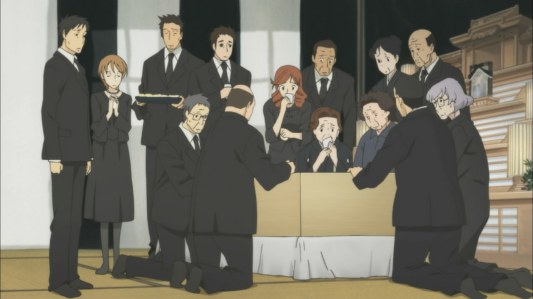 I do wonder how much of a role the other family members will play in the remainder of the series.  For one, it seemed like Daikichi lived alone and rather isolated from his family.  In fact, it was mentioned how he never returns home for New Year’s Day, which I am going to blindly assume is like Japan’s version of Thanksgiving, the holiday where the entire family gathers together for good times and great football.  But Reina appeared to have an important role in the episode and I can only figure that Rin will be seeing a lot of her, likely resulting in social and family conflicts.  Her mother, Haruko, will likely be significant to the story, too, probably as a vital source of parental information.  But the others seemed minor, even in this episode, so I’m not sure what to think of their involvement in future episodes yet, but I guess time will tell (or the manga).  I hope to see more of the family since I felt Daikichi had genuine interactions with them but I never see it becoming a large part of the story, especially since this is a story about Daikichi and Rin. 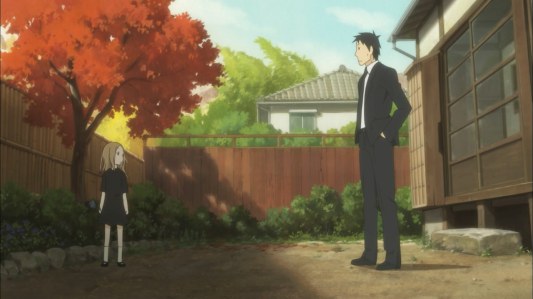 This entry was posted on July 7, 2011, 8:50 PM and is filed under Anime, Usagi Drop. You can follow any responses to this entry through RSS 2.0. You can leave a response, or trackback from your own site.