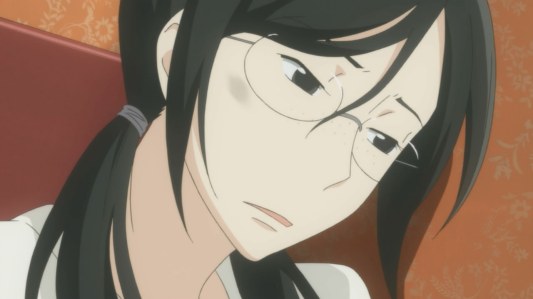 You can see a whirlwind of emotions within Masako throughout the entire episode.  Whether she’s exhausted, irritated, astonished, regretful, or jealous, you can clearly see those feelings on her face and in her body language.  Of course, you can see the emotions of every character in this series, so that’s nothing new, but Masako has generally been stubborn and impassive since her introduction four episodes ago.  But that façade melted away and she journeyed through a series of emotions when she finally saw Rin again. 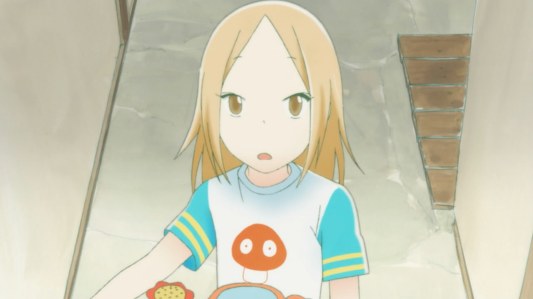 Before seeing Rin again, Masako was like every other mangaka portrayed in anime: overworked, overwhelmed, and above all, fatigued.  We learned she recently took upon another job on top of her current projects which explains why she’s more tired than usual.  But she’s determined to do well and succeed, even through all this unnecessary stress and pressure she assigned herself.  And seeing her tired, stressed, and determined shouldn’t be anything new to us as we’ve see her like that before in previous episode. 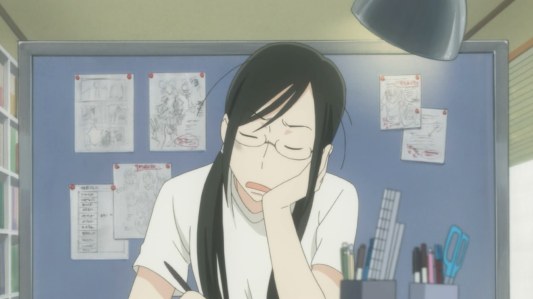 But that’s where the old Masako stops and the new one begins.  On her way back home after visiting Souichi’s grave, a landmark that provides support and comfort for Masako, Daikichi calls out to Masako.  He tells her that he’s visiting the grave with Rin and offers her the opportunity to see the child she left behind and hasn’t seen for at least half a decade.  Masako was absolutely shocked.  This opening came out of nowhere and was a chance for her to see the daughter she abandoned.  Next in line was some anxiety or nervousness, when she began to stroke her hair and consider her options.  She never seems to do well in these situations despite being frequently exposed to external pressures like editors and manga deadlines.  And behind those initial expressions were a bit of relief and remorse.  There was some relief that she was able to see Rin again after all these years and some remorse that Rin was no longer hers.  It all happened so suddenly that Masako wasn’t sure what to do.  She was stunned, unable to move or act.  It was something unaccustomed for Masako, who usually is in control and calm.  This sudden rush of several emotions completely changed her composure and influenced her personality.  And all it needed was the mention of Rin. 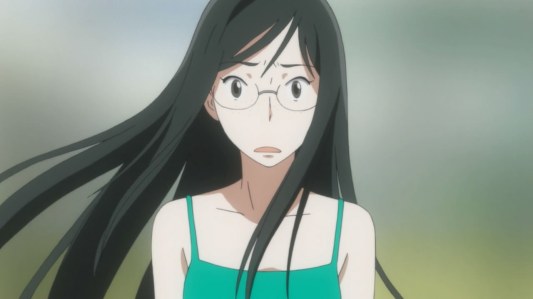 At the graveyard, hiding behind some tall plants, Masako spied on Rin and Daikichi paying their respects to Souichi.  Here, Masako felt a sense of amazement at what Rin had become in those few years.  Rin’s maturity was evident, with the comment that she was no longer a baby, as was her beauty, earning the remark that she looks like Masako did from behind.  But Masako had no idea that Rin would be like that.  She was speechless.  Beyond that, some hints of regret were lingering, knowing that this child, her biological child, was not a part of her life.  It must’ve been painful to see Rin growing up without her there.  I’m sure there was some jealousy in there, too, toward Daikichi for being the one who Rin looks up to and respects.  And with all those emotions flying around inside of her, this is the most ‘alive’ we’ve seen Masako.  Just take a look at her eyes and eyebrows below.  It must’ve been hard for her to handle all these emotions when she saw Rin again after all these years. 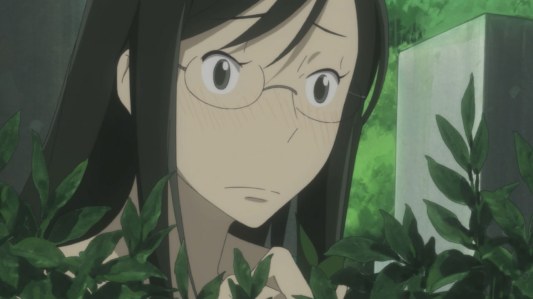 Finally, after that little stalking excursion, Masako and her boyfriend began to return toward the apartment where she would continue with her work.  With Rin out of the picture, she returned to her former self but with more determination and composure.  But Rin was not out of mind.  With Rin in her mind, Masako felt ambivalence, conflicting feelings over Rin.  On one hand, she left Rin behind to focus on her life and career, ones she absolutely loves.  And opposite that is the life she left behind, one where she would be Rin’s mother to raise and love her.  But Masako is unwavering, wanting to use her work to drive out these painful feelings out of her body.  She accepts that this is her life now and will continue down that road.  And so, Masako returns to her normal self after a small rollercoaster of emotions when Rin briefly reentered her life.  But it seems Rin has an enduring effect which may slowly change the way Masako lives her life.  It seems no character is immune from being touched by Rin, the innocent and lovable child at the center of this story. 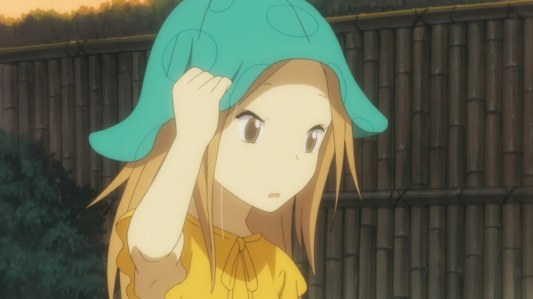 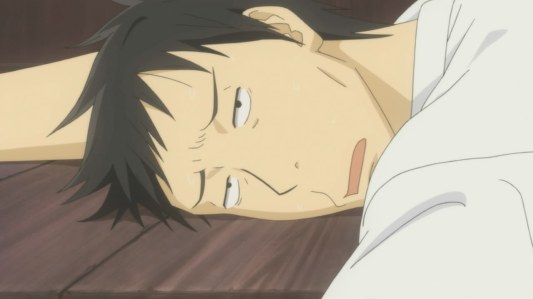 Seeing as how I’ve posted about Masako in three of the last four weeks, it should come as no surprise that she’s one of the most significant characters in my eyes, placing third behind Daikichi and Rin.  Her story is one of the more interesting aspects since it is a stark contrast to every other adult in the series.  She’s the only one without a child, a young woman focusing on her promising career.  However, she’s not free from stress, worries, or regrets.  Her role offers another perspective to the series.  In addition to that, her personality is also another point that I find fascinating.  She’s somewhat antisocial and anxious but often calm and collected.  It’d be easy to call her selfish but it doesn’t do her personality justice.  She also has a feeling of jealousy and angst toward Daikichi and delight and guilt toward Rin.  Masako has a complex personality that is hard to describe accurately.  It’s something that I continuously find myself attracted towards.  I’ve been pleased with the amount of appearances we’ve had of her, especially meaningful ones like this and in the fifth episode (she seemed to be there for comedy in the sixth episode).  I hope we continue to see her be involved in further episodes.  How I’d love to see her and Rin interact, for both to see each other up close and have a conversation.  Maybe they’ll save something as major as that for the finale of this season? 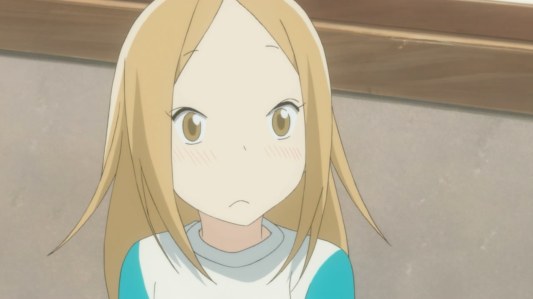 This entry was posted on August 26, 2011, 4:52 AM and is filed under Anime, Usagi Drop. You can follow any responses to this entry through RSS 2.0. You can leave a response, or trackback from your own site.