Ika Musume’s natural curiosity in everyday activities is a driving force behind the stories and comedy in Shinryaku!? Ika Musume.  Her fascination and energy turn simple, ordinary events, like going to elementary school or losing weight, into exciting and entertaining skits.  Furthermore, it’s not just an outsider’s examination and commentary on these subjects, there’s always a unique hint of zest that spices up each skit for a complete comedy every time. 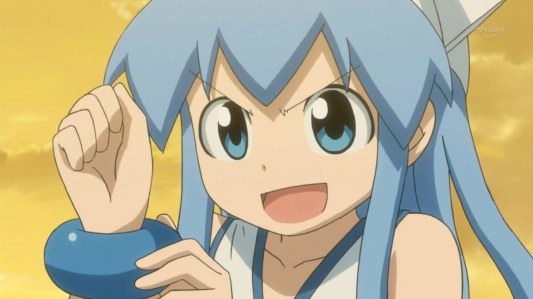 Ika Musume’s awareness and enthusiasm often begin each skit, moving from the uneventful to the specific topic Ika Musume decides to explore that day.  Like a young, inquisitive mind, she often asks questions on things that seem strange or are new to her.  And she doesn’t stop there either.  She often takes the initiative to try out whatever is new or exciting and she isn’t shy of contact, often interacting with new friends effortlessly.  Without her energy and attentiveness, the beginning of these mini-stories would get off to a bumpy start and seem forced and irregular each time.  Given her personality and role in the series, it makes sense for Ika Musume to begin most of the skits the way she does.

Once the skits get started, Ika Musume always providers her observations and opinions on everything.  Her mind works differently than ours so she’s able to look at commonplace objects and events through new eyes, which regularly drives the comedy in these skits.  She’ll see things and reacts completely different than normal  Our squid heroine isn’t afraid to say what’s on her mind either, although she often does it before thinking about the consequences.  She might be in less pain if she does.  But her constant commentary, an extension of her curiosity, helps prevent skits from staling and allows them to progress in any direction.  It’s that final part about Ika Musume that delivers that unique feel toward Ika Musume that’s simply missing from other comedy animes. 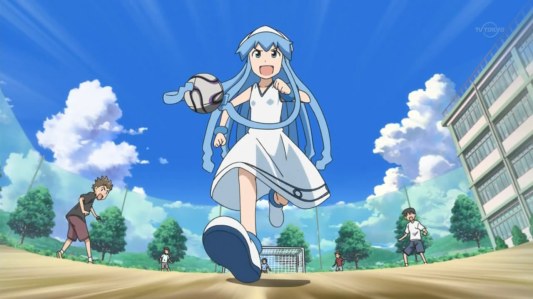 Ika Musume’s personality and characteristics allow for this comedy to do distinctive and remarkable things within each skit.  Take the dieting skit from this episode; it began like how any other comedy anime would tackle this theme.  Starting out with Ika Musume curious and enquiring about dieting and weight loss in general, the comedy was mainly derived from Sanae and Chizuru.  It seemed like Ika Musume would be playing a minor role until they decided to weigh her.  After that, the anime broke the mold and explored its own path for comedy and innovation.  Ika Musume’s unique abilities and perspectives allow for the anime to deviate from the path and reinvent itself in the middle of a skit.  This refocus on Ika Musume’s weight abilities revitalized the skit and provided an unseen set of comedy regarding our protagonist’s weight.  It’s this creative and original use of characters that elevates the comedy and helps Ika Musume stand above the rest.

One final bit on Ika Musume’s curiosity before moving on.  We often see Ika Musume as immature, impulsive, and egocentric, pretty much a child who acts before she thinks.  It’d make sense to add the label ‘stupid’ to this offensive list of descriptions but that would be incorrect.  Ika Musume is actually very intelligent.  It’s a humble trait that is often covered up by her more noticeable traits and actions.  Perhaps it goes unnoticed since it’s secondary to and dependent on her curiosity.  All the questions she asks shows that she’s curious about our human society and wants to learn about it.  She often tries these things with minimal or immediate success and seems to retain knowledge rather easily.  Ika Musume might not have the easiest time transferring this new knowledge into proper action, though, as she often succumbs to her other, less desirable characteristics. 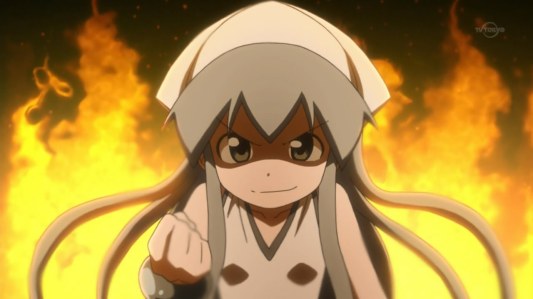 Additionally (and not related to her curiosity), she has high social awareness and is an expert when interacting with people.  Through her own methods, she’s able to help solve other’s problems, even when they have nothing to do with her.  She might not know the social norms like we do but she does pick them up rather quickly.  She makes friends naturally, too, and enjoys spending time with humans despite wanting to destroy their civilization.  Her intelligence might not always be obvious or distinct and she does act idiotic at times but Ika Musume is a rather intelligent squid whose hunger for knowledge is satisfied through her curiosity.  So keep on discovering new topics and inquiring about the world Ika Musume! 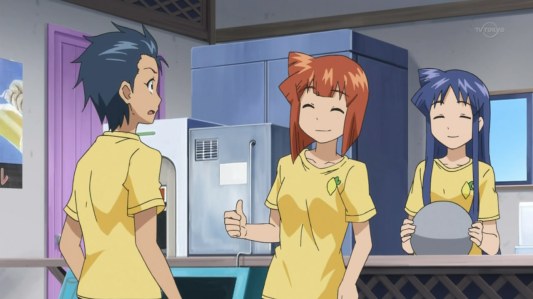 I kinda feel bad for Nagisa, especially in the middle skit when she’s coaxed into becoming a reserve-trap to attract female customers.  She never seems to win any battles in this anime, often being the butt of a joke when Ika Musume torments her or being a mere support character when someone else is in the spotlight.  And then, even when she’s in the spotlight, she gets upstaged by Ayumi when she dresses as a maid with iron knuckles.  At least there’s a moment when she realizes that changing her appearance from female to male isn’t helping her change her true self.  Maybe we’ll get a skit about her later on that promotes her character more, perhaps regarding her surfing or something.  And yeah, if you haven’t noticed, she’s another short-haired, athletic, tomboy-ish girl I like, so you can add her to my ever-expanding list. 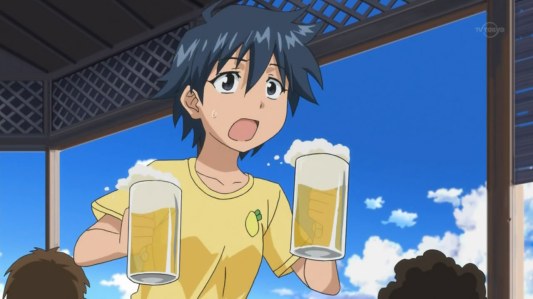 With that being said, I also hope there’s more on Chizuru this season, too.  For being such an important character in the anime, she doesn’t seem to be involved all that often in the stories or with the other characters.  In fact, I wouldn’t be surprised to see Cindy have had more screentime in the entire series than Chizuru.  I was happy to see a story focus on her in this episode with the weight and dieting skit but I want to see her play a more active role when she’s a minor character in other skits.  She’d probably have to steal some screentime and lines from Eiko to do that but I think that’d be a positive change for the anime.  Not saying that I don’t like Eiko but I want to see Chizuru do more than just cook rice dishes behind the counter.

This entry was posted on October 3, 2011, 9:17 PM and is filed under Anime, Shinryaku! Ika Musume. You can follow any responses to this entry through RSS 2.0. You can leave a response, or trackback from your own site.