This week: The mystery of Inga from UN-Go, worries in Chihayafuru, and Tamayura not really being a photography anime.

Changed up a few things this week.  Most notably, I’m no longer writing about Ika Musume, Guilty Crown, or Last Exile: Fam in these posts since they’re already covered every week and more in depth.  These posts will just be for the other seven shows I’m following this season, which gives them a little more focus. 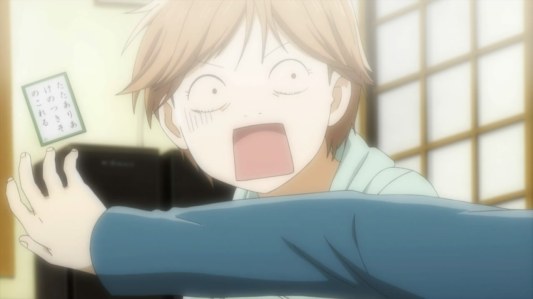 Chihayafuru (Episode 3) – This has become one of my favorites this season but I’m a little concerned for the series once it reverts back to the present timeline.  These flashback episodes with everyone as a child playing karuta have been pretty amazing.  But the rest of the series will largely be centered on everyone in their teenage years.  I’m not worried about a lack in drama, comedy, or storytelling, the writing is too good for that.  I’m just worried about the personalities of the characters now that they’re teenagers.  I guess we’ll find out soon if this concerns are warranted or not since the next episode should be in the teenage years and we’ll have a better idea of what the characters are like.

Mawaru Penguindrum (Episode 15) – What I love about Penguindrum is how everyone is concealed until the show wants information to be revealed.  Up until recently, we never considered Yuri having this deep or significant a dark side.  Throughout the series to this point, she had been glamorous and antagonistic to Ringo and that’s about it.  Her relationship and desire for Momoka were fleshed out in these episodes which really shaped her character in a different light.  To think she was living with these problems throughout the entire series, she never showed it on her face or in her words.  Likewise, we also saw some more about Momoka and her apparently magical diary.  Didn’t expect to see Momoka more than an idolized and perfect human being but now she’s revealed to be able to change the fate of beings.  Every episode is like another layer off on this mystery and pretty soon, we’ll be hitting the core.  I wonder if there’s a true, villainous mastermind behind everyone’s problems in this series or not.

Persona 4 the Animation (Episode 3) – I’m not sure if the anime intended to keep this sensation or not but the anime does have the feeling that I’m playing a video game when I watch it.  Just the way the episodes progress with the stories, followed by a dungeon, various monsters, and finally a boss, it’s got the same heart as a video game.  And I like it.  This anime has had a pleasant transition across media and has been one of my favorites so far, if not my favorite this season.  Haven’t found anything to complain about and have really enjoyed the thorough character development thus far.  If only more video game adaptations could’ve been like this. 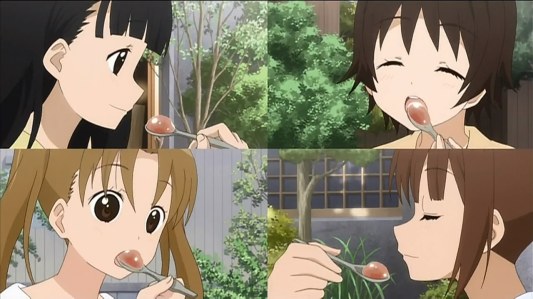 Tamayura ~hitotose~ (Episode 3) – This show often seems more oriented toward food than photography and that’s not just my thoughts after this episode.  Every week, the girls always eat some new dish that not only looks delicious but gorgeous and then they rave about how awesome it is.  When the girls or anyone looks at the photographs, they only talk about it for a little bit, usually without the high praise that they reserve for those culinary delicacies, and then move onto something else.  And so far, Fu seems to be the only one who loves photography while everyone, including Fu, loves these foods.  Each episode has spent more time on food than photography to this point, too.  Kinda wondering if food and cooking will be a more dominant theme in this anime than photography. 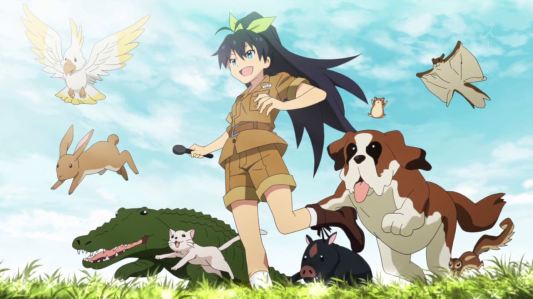 The iDOLM@STER (Episode 16) – HOLY SHIT MAKOTO EPISODE IS NEXT WEEK! But uh, this episode pretty much sucked, resorting back to a clichéd formula that was not really exciting or important, unless you really cared about the relationship between Hibiki and her pets.  It was predictable from the first few opening scenes and never showed any creativity or featured other members of the cast.  This will probably end up being my least favorite episode in the entire series.  At least next week should easily, EASILY, be the best.  Just how good it will need to be seen.  Hopefully they don’t have the episode follow another predictable formula but that might be asking too much for a series like Idolmaster.

UN-Go (Episode 2) – What exactly is Inga?  Aside from the whole transform-into-a-sexy-woman deal and being able to use the horrifying power from within to learn the truth from people, he seems like a normal sidekick for a quiet detective.  Just what is his origin and purpose and why does he follow Yuuki around and help him when his female-form seems to be the one who wears the pants in that relationship?  That’s the mystery I’d like to get to the bottom of soon, trying to find a rational explanation for this irrational character.

Working’!! (Episode 3) – Before the season started, I looked over my all-time favorite comedy list and saw Working!! near the top.  I wondered how Working!! placed so high when I never really had any fond memories of any episodes or character relationships or anything like that, especially compared to shows like School Rumble or Lucky Star.  But this season has reminded me why I love Working!! as a comedy.  All the small details and dialogue come across as entertaining, whether it is smile-enducing or complete laughter.  Satou is a huge reason why and anytime he graces the screen with his presence, it’s sure to be great.  And Takanashi’s family, the subject of this episode, is something I forgot entirely about but ended up being the funniest episode of this season and maybe the entire series.  This second season has been a great reminder of why I felt so highly of Working!!’s first season.

This entry was posted on October 23, 2011, 5:29 PM and is filed under 2011 Autumn, Anime. You can follow any responses to this entry through RSS 2.0. You can leave a response, or trackback from your own site.