Our zany and simple-minded squid invader certainly enjoys the company of humans and our lifestyles and activities above the surface.  And she hasn’t receded her ambitions of conquering mankind either, still actively pursuing her goal in every episode.  But she never has any feelings of internal conflict or ambivalence over her simultaneous and contradictory opinions toward these subjects.  She can’t be friends with humans if she also wants to invade mankind.  So if Ika Musume had to choose between one or the other, which would she select? 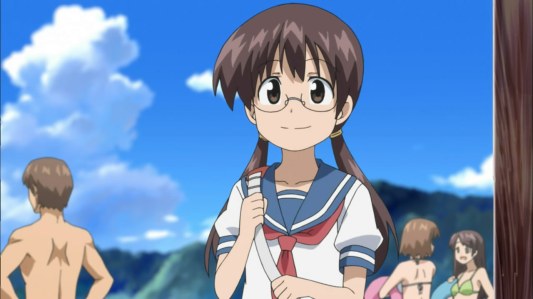 The three skits in this episode each provided another view on Ika Musume’s view on humans.  The remote (radio) control skit showed of Ika Musume’s pleasant standing with humans, playing together with Takeru and briefly tormenting Sanae and Alex.  The second skit seemed to focus more on her invasion side.  One of her many wishes was for a successful invasion and she was obviously deeply disturbed by the unanimous wishes for world peace.  The final skit, the playing alone one, seemed to share some elements of both.  She enjoyed another afternoon with Takeru but was disgusted by the humans torturing the ants (which she also hated).  Ika Musume feels strongly toward each but it appears she’s never thought about them side-by-side and realized she eventually cannot have both.  So let’s assume for a moment that she has to make a decision.  Which one would she favor?

Ika Musume obviously loves the company of humans, especially those who respect her and want to play with her, and at times even shows signs of thoughtfulness and concern.  No example is more apparent than when Ika Musume is with Kiyomi or in this episode specifically, Takeru.  Ika Musume genuinely enjoys spending time with Takeru, especially with that fun new toy that he bought.  And in the final skit, she becomes Takeru’s playmate and tries to teach him how to become a master of playing alone.  These two skits reiterate Ika Musume’s outlook toward most humans, that she generally likes them and likes to be with them.  She’s even reached the point where she feels devastated after breaking Takeru’s toy and seeing how he’d be depressed.  She went out of her way to become the replacement for his toy and eventually his slave to do chores or anything.  Ika Musume went completely out of her way to protect Takeru from her mistake, which shows how strong of a bond she has with her friends.  Or are they supposed to be enemies?…

Similarly, she still views all humans as her enemies.  During the Tanabata skit, our greedy mollusk hero focused on wishing for a successful invasion of humanity (in addition to being taller, stronger, and having more shrimp) which shows that it’s almost always in the forefront of her tiny mind.  In fact, she often sees human activities as somehow related to her invasion or that they’re militaristic somehow as she investigates the human world.  And it was quite comical to see her reaction to all the world peace wishes which also meant wishes against her conquest.  So the invasion is still quite important to Ika Musume even if she’s not pursuing it to the fullest every day.  So which of these would Ika Musume choose if she had to make a choice and follow one through to the very end?

Considering what we’ve seen in the ~1.5 seasons of Ika Musume, I’m confident that she’d choose to accept her friends and postpone the invasion.  For one, she certainly enjoys spending time with all her friends on the land more so than she does at failing to invade.  The fact that she cannot defeat Chizuru, too, also would put a damper on any stop being friends/take over Lemon plans.  But maybe the most important reason, and the reason I feel would ultimately do in the invasion side of the argument, is that Ika Musume does not need to invade.

The goal of the invasion was to teach humanity a lesson about polluting the waters and mistreating the ocean.  Her ultimate goal is not becoming Queen of the Earth but rather an environmental one, please stop destroying our home.  She can ultimately accomplish her goal through non-invasion methods.  Through education, political action, and economic regulation, Ika Musume can get her wish of a healthier and livelier ocean.  She doesn’t need an invasion to accomplish that.  And she would not have to sacrifice her friends doing so, too.  In fact, with Ika Musume making so many friends, her message can easily be amplified and she can make real progress toward her goal.  And when all is (theoretically) done, then she can spend all the time she wants with her friends on the surface.  With these considerations in mind, I fail to see how Ika Musume would choose her invasion over her friends. 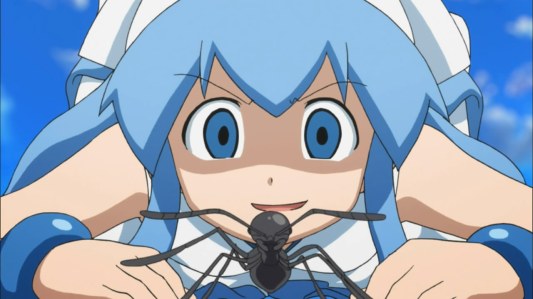 Was it just me or was there a considerable drop in animation quality in this episode?  There were just some scenes and characters that looks subpar for Ika Musume which really isn’t known for its stellar animation or striking artwork.  It never got to the point where it would bother me from enjoying the comedy or the skit but it was noticeable to the point where it become a bit of a distraction.  One memorable scene in particular, a girl’s bikini wasn’t fully completed which is quite a major mistake (don’t question where my eyes are, okay?)  Not sure if that has been apparent in other episodes, too, but it caught me by surprise since this show has been fairly consistent this season.  At least all the important scenes and main characters are animated properly and as long as there’s no effect to the comedy, then I really won’t care. 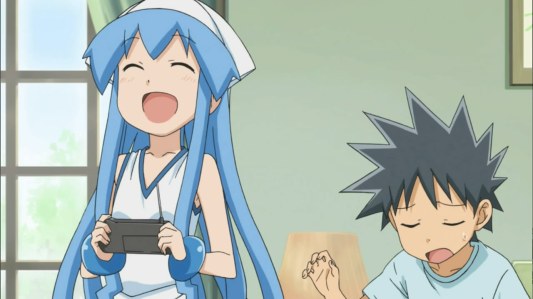 This entry was posted on November 2, 2011, 7:02 AM and is filed under Anime, Shinryaku! Ika Musume. You can follow any responses to this entry through RSS 2.0. You can leave a response, or trackback from your own site.