…the hell am I watching?  Sometimes Guilty Crown is truly amazing, a visual masterpiece with exhilarating action sequences and intensified drama.  But other times it leaves you dumbfounded, confused, and needing to ask, “Really?  Is THAT really what I’m watching?” 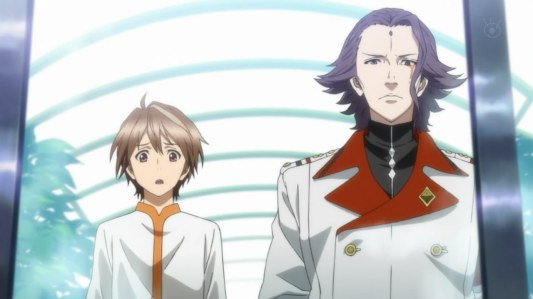 Too be honest, this was my favorite episode of Guilty Crown to date but there are still some major flaws with the show that are keeping this show from living up to its potential.  Both the story and the characters, especially Shu and the new head villain Segai, were significantly improved.  I like villains like Segai who are understandable and try to convince the enemy when they’re at their weakest yet bold and psycho enough to do crazy shit whenever he wants like it’s an on/off switch in his mind.  He’s much better than that loser Daryl from the second episode who was just so unconvincing as a character.  Additionally, Shu was being rational and true to his emotions rather than sulking and being a loser about his situation.  The fact that he reacted angrily against Gai shows he’s grown and is more secure around people.  And I really enjoyed how the episode took time to show more of the world including the whole isolated hospital ward, which was relevant to the story in order to guilt-trip Shu into believing the Funeral Parlor was wrong.  And the whole prison rescue mission was fun to watch and was a logical progression for the series, reintroducing everyone again and getting Shu to finally join the terrorists.

But if that were all, then I’d be ignoring some of the many glaring mistakes in this episode.  There are more than the three I’m planning to talk about but these drew the biggest reactions from me, and therefore, are the best ones for me to talk about.  It’s not that they’re ruining the anime but I know I’m getting a different reaction than what the director intended from each scene.  Or maybe to put it in a simpler way: these flaws are distracting but not detracting from the enjoyment of this show.

Okay, first up is probably the most obvious and something I hope everyone else noticed was Inori’s 50 story leap when she was breaking into the prison to rescue Shu.  Seriously, what the hell was that?  I couldn’t stop laughing after I saw that and had to repeat it a few times to make sure what was onscreen was real.  I don’t mind that she’s running around, dodging bullets, and leaping around the place but how does she jump off a railing to the very top of the prison in the most effortless way possible?  It was like she jumped and floated herself up 50 stories.  She didn’t use anything mechanical or magical to assist in that jump, she doesn’t have any superpowers, and she’s a real human being (at least that’s what I’m assuming) so how is any of that possible?  How?  What were they thinking when they put that in the storyboard and again when they were animating it?  Had there been something else, even something minor or insignificant, then it would’ve saved the scene but no, there was nothing to explain that.  There better be scenes of her flying around Tokyo in the future, just gliding around the metropolis like it’s no one’s business.  Otherwise, I’m calling bullshit on this scene.

Kenji Kido’s Void is pretty nifty, a gun that manipulates gravity to wreak havoc on people, mecha, and water fountains alike.  I wasn’t expecting anything like that when Shu revealed the weapon and was fairly pleased with how it was used in that battle.  And again, the visual effects of the weapon were impressive.  But I knew I was going to hate it as soon as Inori leapt from the top of the prison to where Shu was (how exactly she knew that, I don’t know.  She located his cell but shut off her communicator, so she should not have assumed he’d be out in the open with some gravity gun but that’s another issue).  To be honest, using the gun and jumping on the water to reach Inori was pretty awesome, I won’t lie, but the whole scene felt incredibly forced and cheesy.  This is the first time I think the music actually made a scene funnier than more intense, which is a shame because I’m kinda fond of that song they played then.  Shu’s screaming didn’t help either and it’s not like he needed to exert himself that much.  I guess he couldn’t wait to grab Inori’s breasts because he could’ve just waited until she reached the ground with the help of that gravity gun and then gotten her Void then.  The scene came out as way too dramatic for what it warranted.  Had the series taken a more subtle or credible approach to their beautiful reunion, then maybe I wouldn’t find the scene to be so hilarious.

The GHQ has to be the stupidest military organization I have ever seen in an anime but these prison guards take the problem to a whole new level.  I’ll never understand why Gai and Shu were able to meet and talk for such a long time.  Surely the walls aren’t too thick where you can’t listen in on what they’re saying but let’s assume that these guards are ethical and respect attorney-client privilege.  But when the power shuts down and the prison begins exploding in every which direction, why didn’t they barge into the room and take the prisoner and lawyer to a safe area or at the very least, check up on them?  Instead, they waited for Gai to give a few orders and for Shu to become decisive before entering the rooms.  There were other flaws in the personnel of the prison but enough of them, onto their management.  The prison received a warning from a terrorist group that they were going to attack and take back a prisoner yet they did nothing to prepare for it.  You would’ve thought they would’ve heightened security and surveillance for just such a serious threat.  But no, the prison was easily overwhelmed by two people, an obsolete mecha, some standard rocket artillery, and a catgirl’s robotic minions.  And going a level above that, what about the whole military force as a whole?  There are a bunch of terrorists running around destroying various parts of the city and stealing top secret weapons and yet they never seem to care about stopping them.  If the GHQ had any intelligence, they probably would’ve noticed them setting up their artillery and mecha pointed at the prison they publically declared to besiege.  But no, there was no military or anything to stop them.  And what about the ending, why was there no military support for the prison to help catch the terrorists and save the lives of their men in the prison?  The Funeral Parlor was free to escape however they pleased, which really makes you wonder.  I fail to understand how they continue to oppress Japan when they never do anything.  And when they do, they’re always failing and being stupid.  No wonder why Gai hates the GHQ so much, I’m starting to hate them myself but for obviously different reasons. 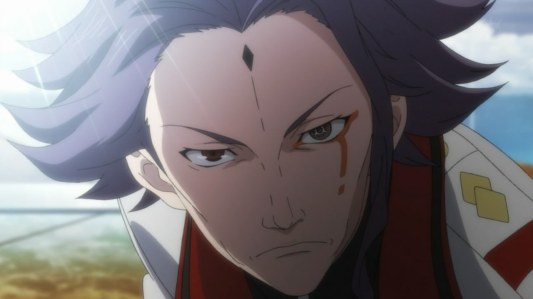 It’s a shame there are random flaws like these in an anime of this potential.  I’m not sure if someone is lazy with the quality check or if they don’t care or what but they’re clearly missing a step in the production process.  It’s like they are presenting a majestic and celebrated masterpiece but someone forgot to polish it before it was put on display.  It hasn’t tarnished the anime for me but it comes across as sloppy and inadequate.  The anime is still enjoyable but not as much as I anticipated when the season began.  If the number of flaws can be reduced, which should be expected of any anime, then the anime will finally start getting the respect that it should be receiving.

About now is the time we’ll start to learn more about the people within Funeral Parlor and start exploring their characters more.  We really haven’t seen much of anyone besides Gai and Inori and can only make generalizations about the only other girls in the series, Tsugumi and Ayase.  I’m curious to see what types of backstories they come up with for each character but I’m not expecting much originality or depth to each one besides Gai and Inori.  Still, I want to see more of each character and see what motivates them to continue to fight against the GHQ and keep them together as a group.

This entry was posted on November 3, 2011, 3:10 PM and is filed under Anime, Guilty Crown. You can follow any responses to this entry through RSS 2.0. You can leave a response, or trackback from your own site.