Despite Nisemonogatari narrating the stories of Karen and Tsukihi Araragi, the presence of these characters, to date, has been woefully underwhelming.  Although the current story concerns Karen’s unfortunate curse, her participation and involvement has been an absolute minimum and been reduced to a sideshow compared to the main event of the Araragi circus, the parade of girls from the former series.  The majority of this episode continues this theme by examined Senjougahara’s revenge on Kaiki rather than Karen and her predicament.  I wouldn’t be surprised to learn, if true, that Nisemonogatari has spent more time on Senjougahara’s fascination with Kaiki rather than all the combined time Karen and Tsukihi have been allotted.  That’s the true travesty here.

Nisemonogatari should be the anime revolving around the lives and misadventures of the two Araragi sisters.  The stories of Nisemonogatari are the two stories that involves them.  The opening sequences (at this point only one but that’s a matter of time) feature performances by their seiyuu and their characters singing along in the ending animation.  And a good majority of the promotional work for the anime shows the two Fire Sisters front and center indicating that this is their anime.  So why have they been shunned in favor of the old cast who already had their time in the limelight?  Aren’t they satisfied with their stories from Bakemonogatari?

I’d be lying if I said anything otherwise but I am disappointed in the lack of involvement Karen and Tsukihi have had in Nisemonogatari.  What brief times we’ve seen of each have been some of the best in this anime and they’ve quickly escalated to be two of my favorite characters within the franchise.  I was thrilled with the prospect of this anime featuring the sisters as main characters, too.  So when an episode like this, one that features only a few shots of Karen in bed and a scene of Tsukihi distressed, I’m going to find fault with it despite it having a meaningful scene with Senjougahara and a pleasant reappearance of Shinobu. 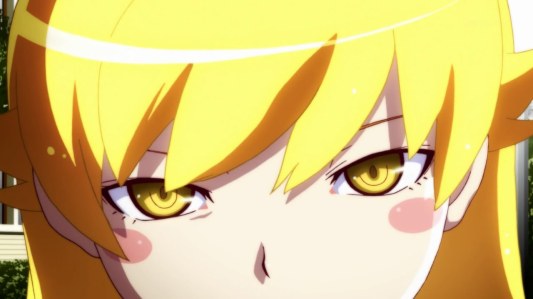 It’s frustrating to see the two title character, both ones that I’m fond of, be placed in reserve for characters from the previous series to be featured again and again.  Though the character arcs were shorter in Bakemonogatari than this one, they featured the heroine primarily and almost never deviated from their story.  Of course, that couldn’t happen in Nisemonogatari since the first three episodes were spent revisiting all the girls no matter their involvement to the story.  And it seems that pattern continues even into this episode although the conversations were more appropriate given the placement in the story than the initial episodes. 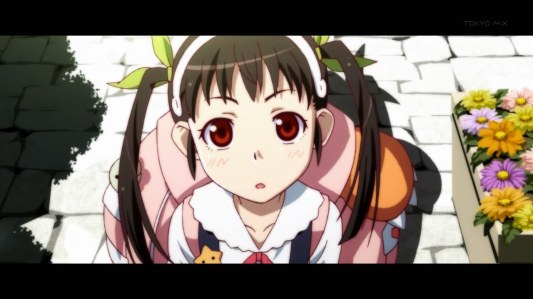 Still, I have hope we’ll see more Karen and Tsukihi in the near future.  The story for this arc is about Karen, so once she is found there should be considerable progress on her front until her curse is resolved.  The next arc will be about Tsukihi so she should actually get some valuable screentime rather than being a moderator between her older siblings or discussing with her brother her thoughts on growing up.  Until then, however, I can’t help but feel Nisemonogatari missed on this aspect of the anime.  Until the title characters begin to feel like title characters and are featured as such, Nisemonogatari will not live up to the potential it should have already achieved. 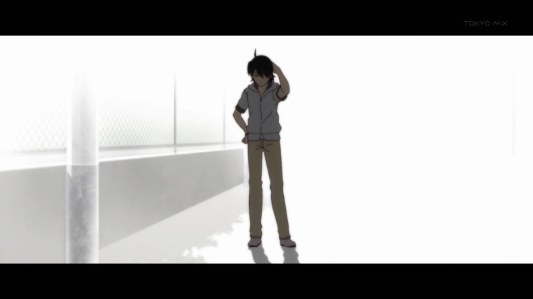 Though the “Shaft Head Turn” is present across the spectrum of Shaft anime, I can’t help but feel that Senjougahara is the spokesperson for such a phenomenon.  Her overdramatic behavior and eccentric personality combine to be an ideal match for such a motion.  The head turn or tilt or motion or whatever certainly holds a dramatic angle to it, putting more weight into the scene and words than most other physical motions, as well as a bit of playfulness to it.  It certainly matched her personality more than anyone else in the Bakemonogatari franchise and perhaps is the best among any anime Shaft has produced.  Senjougahra seems to perform the act more than any other character, too, but that doesn’t stop characters like Kaiki and Shinobu to also do the act (which both did to some degree this episode).  But of all the characters, Senjougahara does it the best.  It’s not vitally important to anything but it’s one of the quirks about Shaft anime that I’ve always enjoyed and I’m pleased to see it featured as much as it is in Nisemonogatari.

This entry was posted on February 12, 2012, 2:17 PM and is filed under Anime, Nisemonogatari. You can follow any responses to this entry through RSS 2.0. You can leave a response, or trackback from your own site.