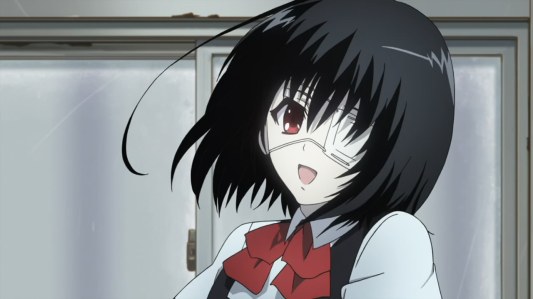 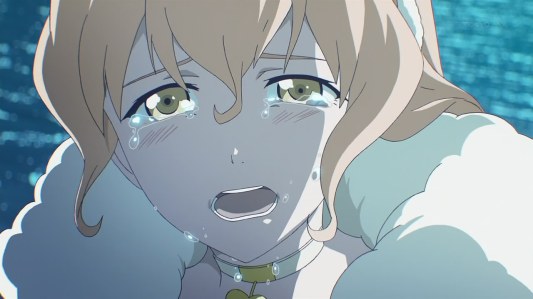 Rinne no Lagrange (Episode 7) – For whatever reason, I continue to have doubts about Rinne no Lagrange feeling that at some unknown episode the series will begin to crumble and reveal itself to another mediocre mecha/fanservice anime.  But these past few episodes, with the focus of introducing and developing the main trio and initiating the story, have been excellent, even beyond the presentation, writing, and directing.  Rinne no Lagrange may have done the best job of any anime this season in these few episodes by showing the depth and complexity of the main trio and integrating it into the context of the story.  I feel some magnitude of connect with the main trio that is above that of any other set from any other Winter anime.  And that, something as essential and significant as properly introducing your characters and providing immediate development, is worthy of some praise. 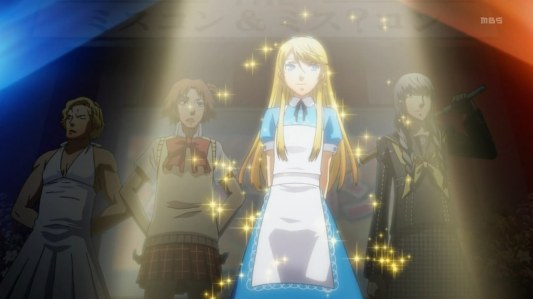 Persona 4 the Animation (Episode 19) – Persona 4 has the satisfying custom of assimilating serious or meaningful scenes into episodes primarily intended for comedy and fun and still getting the most out of them.  Many anime often attempt this approach, usually early on in their seasons, but run into either one of two problems.  The first is that they just don’t mix at all and they end up as discrete entities with all serious and all comedy separated by a scene transition and new location.  Other times one theme becomes overpowering and dominates the other, even to the point where it completely masks it with inferior theme going undetected.  Not true with Persona 4.  This episode was able to integrate a social link, some development on Rise and her rethinking her career choice, and some comedy with an awkward group date scene and a hilarious crossdressing and almost-miraculous (why didn’t Naoto walk out on stage???) beauty competitions.  The outcome is an episode that is both entertaining and meaningful and shows why Persona 4 continues to be my favorite of the season. 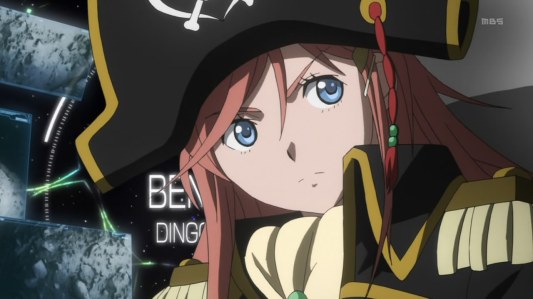 Mouretsu Pirates (Bodacious Space Pirates) (Episode 7) – So we’ve seen Marika and her crew perform their jobs two times now and I’m beginning to wonder if something is off here. ‘Piracy’ just doesn’t seem like the best word to use for what they do.  It’s an appropriate word since they obviously participate in piracy: sailing on a ship, hijacking other vessels, pilfering valuables (which they keep!), and dressing up in awesome costumes among other things.  But pirates aren’t contractors nor do they put on performances for the sake of their clients.  They’re supposed to be rogues who do what they want to do or work for whoever pays them the highest price.  It often seems like Marika and her crew are a traveling act who specialize in pirate-themed performances and entail an unfathomable price tag.  But ‘acting’ or ‘drama’ aren’t the best word either since there is some truth behind each of their attacks and I’m sure there will be serious pirating and adventuring before too long.  No, perhaps the best word to describe what Marika is currently doing is ‘privateering’ which I and other bloggers have mentioned to this point.  But in regards to the title of this anime, I’d have to say that Pirates works much better than Privateers (and Miniskirt Privateers might send the wrong signals for this fine anime). 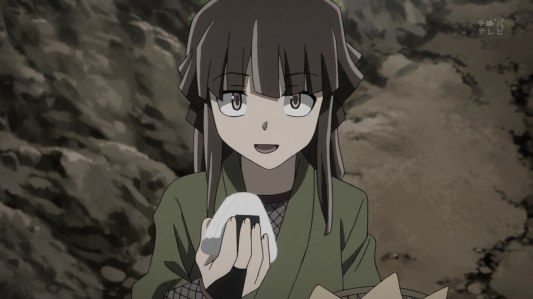 Future Diary (Mirai Nikki) (Episode 19) – So I’ve had this question from near the beginning of Future Diary but haven’t really amplified it or really even mentioned it since then.  But what bothers me about Future Diary and the concept of these diaries is, why not use from for more than playing in this survival game?  Yuki knows enough of his diary that he could easily become a millionaire or more in the matter of hours if he utilizes his diary to its fullest.  Yuno, always knowing everything about Yuki, could really have him anytime she wants, if she plays her cards correctly.  It’s true that she failed before in the past but honestly, fix a few mistakes that you know about this time and no one is stopping you this time.  Minene could go on a crime spree or do whatever she wants, so long as she follows her diary’s escape routes and doesn’t overdo it.  And I’m sure some of the other gimmicky diaries could do other things, too, but you get the general idea.  I’d love to see the players use their diaries for more than killing each other or surviving their competition but, to be honest, it’s not what the anime is about and it’d just drag the story on further than it needs to go.  Still, something would be nice. 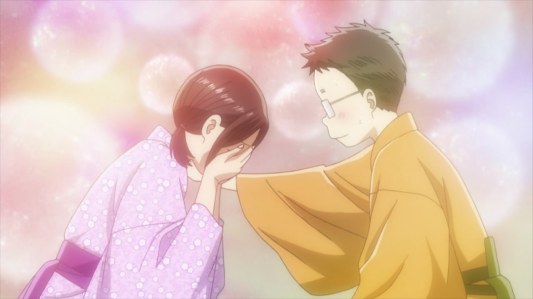 Chihayafuru (Episode 19) – If I weren’t so lazy, I would’ve found a quote about teams coming together after doing some ultimate test about competing against themselves and posted it here but this sentences gets across the idea of what I want to talk about while saving me probably an hour of searching and selecting someone’s famous words.  But yeah, the fact that both pairs of competitors were able to look at each other and continue to share their friendship highlights the strength of their relationships.  Though Taichi had it the hardest out of anyone, losing, not advancing, and failing to achieve his goals for the tournament, it was challenging for everyone, including Chihaya who merely spectated the two matches.  Seeing everyone come together after a pair of taxing matches like that is probably the aspect I adored the most from this episode.  I really hope this theme continues throughout when everyone tries to do their best in the next team tournament. 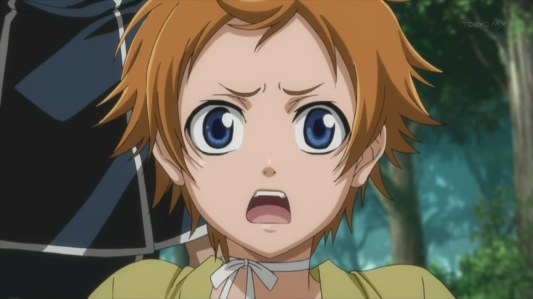 Brave 10 (Episode 7) – At first, the one or two gimmicky characters in BRAVE10 were fine since they contrasted the excessively serious Saizo, the bipolar happy-go-lucky and woefully depressing Isanami, and the rest of the ‘normal’ cast of the anime.  Now, with the addition of Benmaru, the orphan boy who’s adept and explosives, traps (not that kind!), and trickery, to the trio of Kamanosuke, Sasuke, and Miyoshi, it’s gotten to the point where there are too many gimmicky characters.  Worst off, their behavior is rubbing off on the best characters of this anime and they’re starting to act silly, too, like when Isanami commanded Miyoshi around to be her personal slave.  It’s fine for episodes like these where the entertainment aspect is the biggest angle but it doesn’t bode well for the story as a whole or when the characters are in a grim situation.  Though I’m not particularly fond of the story to begin with, it could still do without these one-dimensional, one-joke secondary characters. 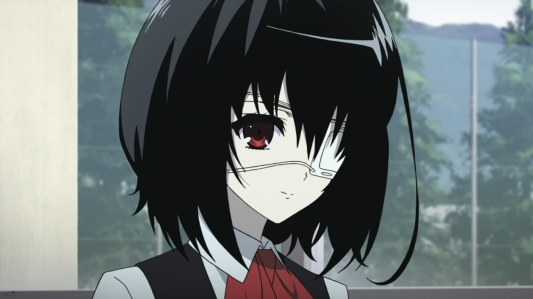 Another (Episode 6) – Remember those dolls in Another, always appearing between transitions to absolutely murder any impact the prior scenes had?  Oh, how awful that was.  Or when Mei and Kouichi would meet up and it always happened to be DOLLS! in that creepy basement of that doll museum?  Well, their sudden absence from the series has been a welcome change to the anime.  Removing these scenes has allowed the anime to make strides in its story by providing better connections between DOLLS! scenes so the anime flows seamlessly rather than having abrupt breaks DOLLS! that annoyed more than anything else.  Although I do wonder what role the dolls played (I continue to think they represent people, strengthened after the scene where the doll fell from the shelf the same episode Sanae died in DOLLS! the elevator shaft), I am thankful they’ve been removed from the anime in its current state.  I continue to hope it stays that way until maybe the finale where they explain the dolls with a footnote or something.

This entry was posted on February 25, 2012, 7:53 PM and is filed under 2012 Winter, Anime. You can follow any responses to this entry through RSS 2.0. You can leave a response, or trackback from your own site.