Bakemonogatari and Nisemonogatari are extremely analogous in many respects, beginning with the obvious such as the recurring characters and static themes in each arc to the minor details like the specific visual styles employed during gags and how characters appear in certain defining shots.  As the sequel, Nisemonogatari borrows heavily from the original series but there are enough subtle differences between the two to distinguish it as a separate series rather than just a simple continuation of the first.  Among these modifications is one I’ve grown particularly fond of which reiterated itself this episode with the introduction of the mature and uncomforting beauty, Kagenui Yozuru, and the slightly obstinate and slightly tranquil child, Ononoki Yotsugi. Whereas Bakemonogatari dealt with conflicts derived from phantasm and strange phenomena, Nisemonogatari stems its plots around intelligent beings who can create a more dynamic and engaging story beyond the capabilities of curses and other setbacks. 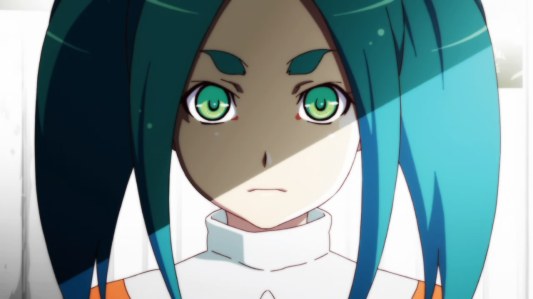 What started this trend was the villain of the Karen Bee arc, the sophisticated and charismatic Kaiki (whom I’ve already sung praises about various time already).  Kaiki’s intimidating presence throughout the Karen Bee story added another dimension to the arc, not only be reengaging Senjougahara’s character in an opportune chance, but by providing a face and personality behind Karen’s illness for a chance of revenge and closure.  By having Kaiki there, a new sense of retribution and closure could be achieved. True, there were parallels to these in Bakemonogatari which were shown in various forms (such as Senjougahara coming to terms and accepting weight) but not to the degree of satisfaction that beating and bruising a villain would grant.

Try to imagine, just for a moment, what the Karen Bee arc would be like without Kaiki assuming the role of the villain and remaining in town for the final confrontation.  Suppose Karen contracted the debilitation fever through the same means but that Kaiki had never appeared, similar to the Sengoku Snake arc from Bakemonogatari.  The focus would’ve been shifted solely on Karen and her recovery rather than trying to enact revenge and punishment on Kaiki for his vex.  This would’ve been similar to how Bakemonogatari stories played out spending more time on the girl and her enchantment rather than the enchanter and their actions.  Though the arc was not resolved in a way that Karen, Koyomi, or anyone would’ve greatly enjoyed, there was a sense of closure that was derived from seeing Kaiki leave the town (assuming it was not a lie) after being confronted by Koyomi and Senjougahara.  That additional bit, however, is why I’ve found myself enjoying the stories in Nisemonogatari more than Bakemonogatari.  It’s that extra step that allowed the sequel to surpass its original.

Now, with the addition of Kagenui and Ononoki in the Tsukihi Phoenix arc, we are blessed with two new characters from which to place blame or importance on.  Not only is it pleasing to have new characters be introduced to the series, seeing as every character in the –monogatari series is extremely distinctive and fascinating in their own way, but it will be satisfying to see these characters interact and defend their actions in ways curses and the likes cannot.  Furthermore, after hearing Karen describe the offensive capabilities of Kagenui, that of someone on par with her karate instructor (who must be Godly, I imagine), raises the flag that there will be a fight in the coming episodes that guarantees it to be thrilling and enthralling.  Ononoki is sure to play some exciting role, too, but at this point her role is unknown.  Either way, these three characters have and will have an exciting impact in the way Nisemonogatari tells each of its stories and how its characters respond to these adversities.  It’s said ‘the more, the merrier’ and I couldn’t agree further, especially when it comes to villains in Nisemonogatari. 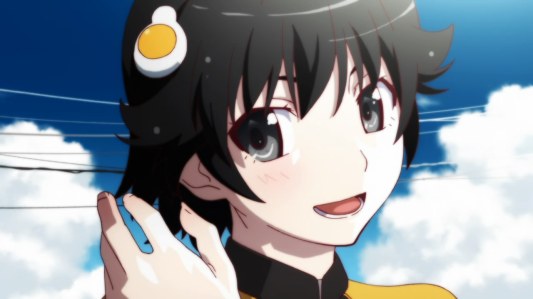 My original post for last week’s awkward oral hygiene episode was originally supposed to be a rant about the deconstruction of Karen’s character from an independent hot-head who showed her compassion for others by kicking ass to yet another zombie of Koyomi’s harem who exists to pleasure his dick in ways that shouldn’t be overflowing with sexual tension but are.  Yeah, it wasn’t the fanservice in the previous episode that ruined it for me (you could probably tell by now I like smut like that) but how all the character development that went into Karen throughout the previous episodes was completely trashed in favor of creating Kanbaru-clone that was stuck on horny.  But this episode showed enough of normal Karen with her personality and actions that I retracted most of my displeasure from the previous episode and feel pleased that I didn’t rant on the previous episode only for that opinion to be weakened in the next one.  Still, I’d rather that not have happened the way it did but I’m glad it was only shown for fanservice and was not a dominating personality trait that developed from Koyomi’s speech on justice.  Also, the ponytail-less Karen is a welcome change for me alongside Tsubasa’s new short haircut.  Got to admit, those two are probably my favorite bits of fanservice in Nisemonogatari. 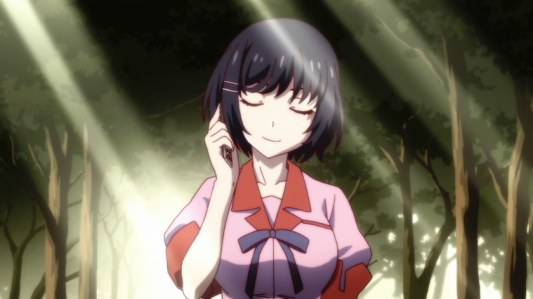 This entry was posted on March 5, 2012, 2:05 AM and is filed under Anime, Nisemonogatari. You can follow any responses to this entry through RSS 2.0. You can leave a response, or trackback from your own site.