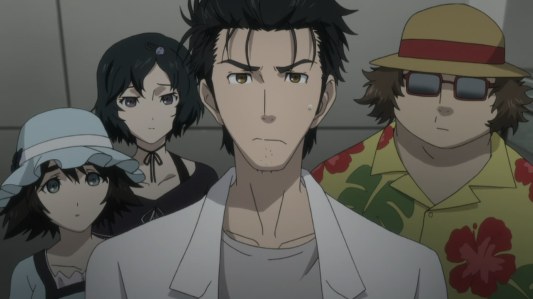 When Steins;Gate ended back in September, I did not want anymore.  The roller-coaster adventure that ventured not only through time itself but every human emotion ended in one of the most perfect ways possible.  Its finale was remarkable and one of the most memorable and favorable I have ever seen from an anime.  Anymore and it would’ve been a drop-off of what Steins;Gate 24 was for me.

But that was then, and this is now.  In the short weeks following the finale to Steins;Gate, I realized I wanted to see an epilogue in the current timeline of what Okabe, Kurisu, and everyone else was up to.  What were their lives like now, I’d wonder.  Well, fortunately my wishes were responded to and this OVA, the 25th episode of Steins;Gate, satisfied my craving for seeing what happens after the conclusion of episode 24. 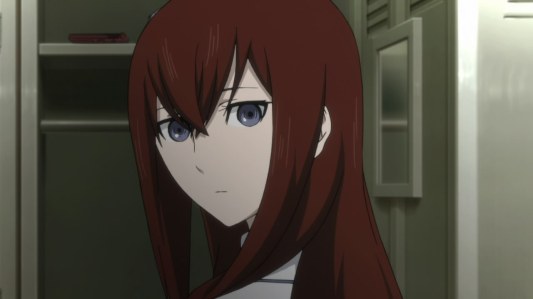 Though this episode is essentially a fanfare of fanservice (the non-ecchi kind), showing only minimal plot advancement though in all the right areas (Kurisu’s dreams and her relationship with Okabe), I thought this episode did everything I wanted from an epilogue.  Had the episode shown heavily advancements in the plot or tried to revisit central themes from the original TV series, it may have created more expectations and more cravings for more substantial material in Steins;Gate.  For the most part, aside from the cut-to-black ending of this episode, I don’t feel like I need to see anymore of Steins;Gate.  I do want to see more but that’s true of almost every anime and shouldn’t be a reason to knock this excellent OVA.  The most important element of the epilogue was to create a bit more closure on the story without opening up any new routes or ideas and it managed to perform that outstandingly. 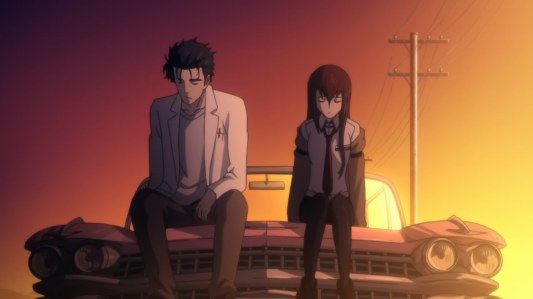 Besides those two details, the entirety of the episode was just fun with the cast and their new adventure.  Instead of traveling through time however, our familiar gang journeyed through space and arrived in America, home of the fabulous, non-mad scientist, Kurisu.  As a fan of various settings in anime and an American myself, I must say Steins;Gate did an excellent job of creating an appropriate environment for this episode which really took the series out from its usual element and into something novel and exciting for this special episode.  I will admit I was a bit bummed to see Moeka, Mr. Braun, and Nae only get a quick scene in the beginning but I am glad to see they’re doing well.  If there was one craving that was started by this episode that still remains unsatisfied, it would be to see more of those characters. 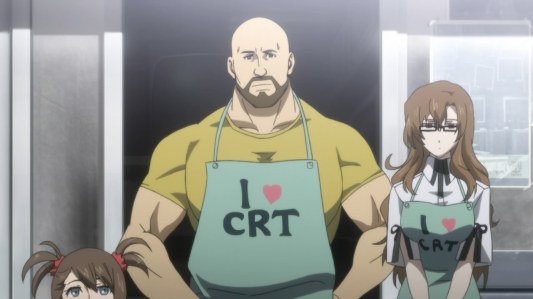 The relationship between Okabe and Kurisu remains unresolved at this point but has been progressing at a steady and appropriate pace and leaves us hanging at one the best moments conceivable.  Yes, it is an annoying tease not to see what happens next but you know what happens next.  Yes, the fact that you know it is why Steins;Gate has one of the best romances I’ve seen in an anime.  If you ever get to know me beyond what I write about on my blog, you’ll know I am very picky about romance in anime and often am so peculiar about it and so exact about what I want that I constantly complain that I hate all romance anime and the romance genre in general.  But what Steins;Gate does right that most romance anime fail to do is that is progresses at an appropriate pace and is rational.  It isn’t just endless frustration or romance scenes used for humor in a cycle of disappointment and defeat but it actually grows from the beginning to the point we just saw.  This episode seemed to focus on this aspect more than anything else and showed constant signs of advancement, development, and meaning.  It was actual romance.  And it was enjoyable to watch.  The way the series was structured and how the romance advanced made the whole angle wildly engaging and always entertaining, especially when you see it from Okabe’s eyes and you can only imagine it from Kurisu’s perspective.  Though I don’t consider Steins;Gate to be a romance anime, it has the distinction of having one of my favorite romances of all time.  This OVA helped augment it and advance it to an acceptable ending point and I couldn’t be happier with how this turned out.

Thanks for all the wonderful moments and these delightful memories which made Steins;Gate one of my favorite anime of all time.  You will be missed but never forgotten! 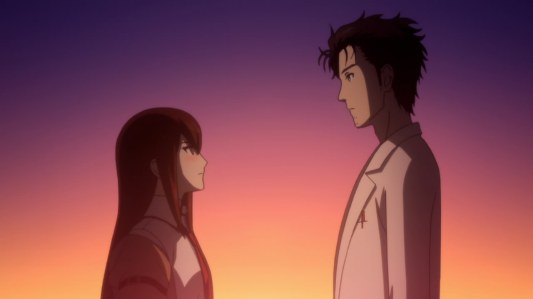 This entry was posted on March 17, 2012, 5:00 AM and is filed under Anime, Steins;Gate. You can follow any responses to this entry through RSS 2.0. You can leave a response, or trackback from your own site.