Guilty Crown was a catastrophe.  From its clichéd and generic origins to its illogical, unsatisfying, and mismanaged conclusion, Guilty Crown was an anime without a structured plot, a direction in which to explore, or a team capable of saving it from its numerous faults.  What began as an uninspired and derivative work ended here in headache and disappointment.  That is Guilty Crown.  And yet, despite all that, I watched the entire anime.  Despite frequent storytelling confusion, irrational actions by its characters, poorly explained details, and countless other gaffes, I watched Guilty Crown in its entirely and actually enjoyed most of the series.  Rather than continue to berate the beleaguered anime in its last post, let’s recall for what reasons I watched this anime. 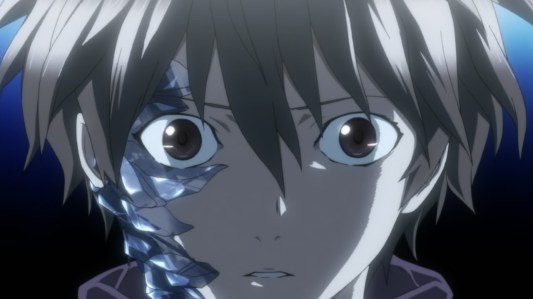 It’d be wrong, at least in my mind, to call these redeeming factors of Guilty Crown since that would imply that they were able to cover the mistakes of the series but these few key points acted as such in their best attempts to save this anime.  And while I’m only planning on covering the major ones, there were other factors that contributed to the anime’s enjoyment that won’t be covered in this post, largely because they were situational.  There were some areas of the anime that were so bad, it was good, like the dictatorship-at-school episodes, and other scenes where genuine comedy in Guilty Crown made me laugh, like Dan Eagleman or Major Segai.  But the areas of Guilty Crown below are really areas where I felt the show never fell below mediocrity and were actually positives of the anime rather than just outliers like the two previous examples.

Easily my favorite aspect of Guilty Crown were the action sequences.  Though their placement and reasoning in the story could always be called into question, I’m specifically talking about the sequences themselves rather than any underlying factor.  Guilty Crown always portrayed its action sequences with high energy, brilliant animation, and dazzling effects, making these scenes essentially delightful eye-candy for the audience.  And due to the structure of Guilty Crown, a majority of episodes had action sequences or scenes in them meaning there’d be an exciting display of explosions, giant robots, guns, and whatnot in every episode.  If someone created a single video that stringed every action sequence together in Guilty Crown and removed any story related dialogue from these scenes, I’d realistically admit that Guilty Crown would be an awesome anime.  But unfortunately for me and most everyone else who watched it, the action sequences only contributed to a fraction of the anime, frequently being overshadowed by disagreements with the story and characters to ever be highlighted for what it was able to accomplish.  The action scenes in Guilty Crown were highly satisfying and entertaining throughout and my favorite aspect of this anime.

Second to the action in Guilty Crown would be the cast of characters, who were largely an enjoyable cast that were muddled by awkward and incredibly forced character development.  But even with that fault on them, the cast of characters were fun and enjoyable.  Who could ever forget Dan Eagleman, perhaps the greatest thing to come from Guilty Crown.  Major Segai was an entertaining character, too, often times pushing the anime in a direction that added action and comedy when the anime desperately needed it.  And the female cast of Guilty Crown was often times enjoyable, too, especially after Ayase opened up and Haruka appeared.  I particularly enjoyed the scene where Ayase had her void used during the terrorist attack.  Despite it being unbelievably ‘deus-ex-machina’, she was able to be placed in the spotlight and prove her worth in the series.  Haruka had always been a fun character and she never seemed to have a bad scene though some scenes at the end were unnecessarily overdramatic and borderline hilarious.  Tsugumi always had energy, a nice attribute when the anime had frequently boring scenes, and Kanon was cute (why yes, that is incredibly shallow of me but the anime never developed her character, so what can I say?).  Actually, all the girls were hot/cute in Guilty Crown, so I’m sure my subconscious had something to do with me liking this anime, too.  There were even some things Shu did that I liked but his overall character was mismanaged throughout the series and often times the things I liked about him were often dismissed for new plot points or for some inexplicable reason.  But overall, the cast was a positive for me in Guilty Crown and one of the most enjoyable aspects of the series. 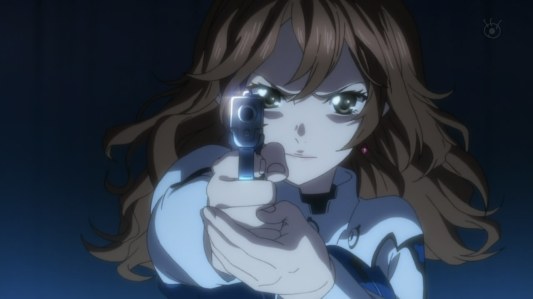 And though I ragged on the setting a few times on my blog while following Guilty Crown, I’ve always had a soft spot in my heart for post-apocalyptic settings and this one delivered.  Let’s ignore the whole Apoc Virus/Void system that severely injured the anime for me and look at the location where the anime is set.  Essentially, it’s a devastated Japan with an evil military that suppresses its people through constant military presence, surveillance, and its giant robot forces.  You have abandoned areas with toppled structures, an unyielding sense of fear and unease, and a resistance force out to fight and save the people who have nowhere left to turn.  Yes, it’s a bit clichéd and overused but it is something that I love and appears frequently in my favorite anime.  Though it was never fully utilized like other aspects of the setting, it is an area of the anime where I found enjoyment and found its inclusion to be quite favorable. 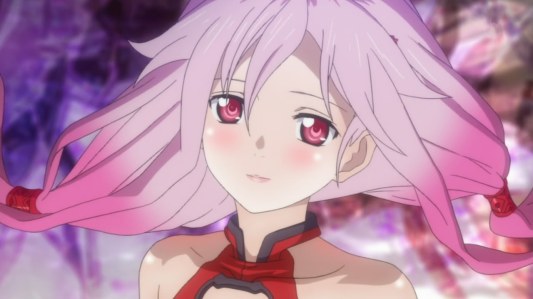 The one area that I did find to be impressive throughout but was never a point that I explicitly enjoyed and watched the anime for was the animation.  I never watched Guilty Crown just for the animation or viewed scenes as enjoyable just because the animation was stellar.  But still, the art and animation throughout Guilty Crown was impressive and worth mentioning even though it was not a point I watched the anime for exclusively.  And that’s about it.  Besides those areas listed above, I disagreed with most of the anime.  I often viewed many of the other aspects of the anime to be mediocre at best and often never that high.  Frequently, these omnipresent faults would overshadow the enjoyable attributes of this anime for me and I’d often be stuck on these mistakes rather than enjoying the scenes of the anime that I actually enjoy.  These would often become points of discussion for me and my friends and I’d dwell on these errors in my blog posts.  But despite all that, I did enjoy certain areas of Guilty Crown and managed to watch the entire anime based off these factors.  Without them, I may have dropped Guilty Crown long ago but these features of the anime were enough to keep me from doing any such thing.  Now that the anime has completed itself and is over, I can appreciate these areas for doing what they did and make an intolerable anime somewhat decent in areas.  And if you think about it that way, it makes those areas even that much more impressive.

The final scenes of Guilty Crown showed what appears to be a happy ending with Shu and all his friends together but shouldn’t it be the opposite?  Isn’t Japan screwed at this point?  Doesn’t the GHQ still exist and still rule over Japan with awesome military powers and ruthless civilian control?  And what about the rest of the world that was ready to bomb Japan only a few episodes ago?  Even without those two obstacles, Japan’s infrastructure is completely ruined and there will be no government or military to enact law and order in the country.  There will be numerous riots and gang violence and a complete free-for-all over resources.  I’d rather see that than everyone getting together for some cake and smiles.  Then again, if I had the ability to change one scene in Guilty Crown, I wouldn’t do it because the whole series would need a rewrite.

This entry was posted on April 3, 2012, 4:38 AM and is filed under Anime, Guilty Crown. You can follow any responses to this entry through RSS 2.0. You can leave a response, or trackback from your own site.