Sorry for the delay on these anime coming out.  I realize the second episodes of some of these are already out but these are still the first episode impressions from the previous week.  I was just that lazy busy these past few weeks.

Acchi Kocchi – Perhaps the most enjoyable or gratifying aspect of Acchi Kocchi aren’t the amusing comedy skits or the excellent chemistry between characters or the fact that the art style makes everyone so damn cute but rather something that this anime seems to do well where most anime come up short.  That is, the most enjoyable aspect of Acchi Kocchi is that the cast act and behave like real humans and not anime archetypes.  Okay, sure, they bleed a little bit of their anime archetypes but the segments with the characters together resemble real life situations and not the standard comedy where boys and girls are separated because they’re always nervous around each other and the main guy’s friend is all “boobs and panties and girlies!” and the main girl’s friend who also has a crush on the main guy hits him with her fist/fan/hammer/etc and gets all angry and cartoony and the third girl is a shy, quiet… yeah, you know what I’m talking about.  Rather, everyone in this group are friends and they don’t dwell on the romance or comedy that really ruins or spoils anime like this for me.  Perhaps the best example was when the girls tagged along with the guys to the arcade: there was no “omg io-kun /blush” and he blushes back bullshit in this anime.  It’s refreshing to see it not rehash annoying clichés while still retaining some otaku charm that makes anime fun and enjoyable.  Speaking of charm, the art style in this anime is incredibly adorable, a personal favorite of mine and reason alone to watch this anime.  The comedy, while not always perfect, is strong enough to keep the anime going and the cast has excellent chemistry together without anyone dominating the screen.  That being said, the anime is far from perfect though and I have my doubts on the romance which seems destined to go as far as a race car without its engine or tires.  But I’m not watching this anime for the romance, so it’s not really a problem for me.  The anime has a nice relaxing feel to it and will be an excellent addition to my lineup this season.

Tasogare Otome x Amnesia (Dusk Maiden of Amnesia) – I really like this anime.  Like, really, really, really, really like this anime.  It’s not my favorite anime this season but it is the biggest and most pleasant surprise of the season.  The main character, an infamous ghost by the name of Yuuko, is essentially the anime in all the ideal ways a title character should be.  Not only does she have a compelling and original role in the story, a ghost solving the mystery of her death, but her personality infuses elements of comedy and, of course, the supernatural to create interesting scenes to watch and enjoy.  The remaining characters of the cast are all pluses, too, for how they play off Yuuko.  The mystery angle of the anime, a genre I enjoy when done correctly, seems to have potential to make a decent plot but I always have my reservations when there seems to be a slight harem vibe involved.  Of course, the harem element is the only aspect that is a negative for this anime with all three girls after Teiichi like any other inoffensive-but-ecchi harem comedies.  But at least the girls do other things besides dream about Teiichi all day or argue and fight with each other about him, so that’s a plus.  The character designs, art, and animation are all in a style that I love and something that like this often ranks higher personally than anime with better animation, a more unique art style, or cuter character designs.  The backgrounds and lighting caught my attention, too, and the way the anime opened with the scene showed twice really caught my attention and lead to a number of laughs.  Though it won’t be shown like that again since it’s a joke that’s already been done once, I do appreciate it showing us from the two perspectives which puts Yuuko’s presence into a more understandable position.  Not sure where the story, mystery, or characters will go from here but I’ll be around to find out. 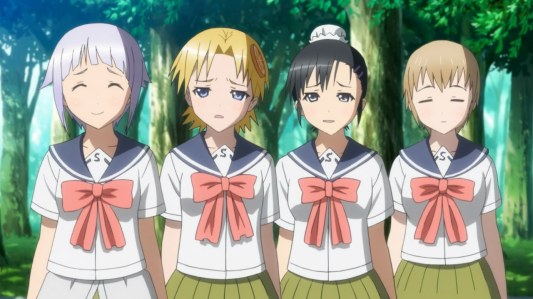 Upotte!! – Upotte!! gets points for being unique, that’s without question.  It’s not every season you find an anime that’s about guns that fire guns while aiming to be the best guns.  And that those guns are girls.  Somehow.  That’s not unique but the fact that attributes of each weapon define each character, such as M16A4’s three bullet burst translating to her frequent breaks or FNC’s skeleton stock translating to a thong instead of bikini panties, certainly makes for a clever adaptation.  There certainly is a heavy amount of detail in modern weaponry spread across the anime and it’s something I find amusing.  The character designs aren’t the best but I’ve seen this style a few times through a few other Xebec anime, so it seems normal now.  Not my favorite but watchable.  And the fanservice doesn’t really bother me either, especially since it’s much less than I anticipated.  There are positives to this anime, more than I thought, but there are negatives with this anime, too.  Among the strongest negatives is the fact that this anime has a plot that is simply not at all engaging.  It’s an anime about girls wanting to do well at school and there’s some romance angle or something or whatever, it’s boring.  Really, the story here is incredibly basic and standard.  The personalities of the girls, too, are also extremely tame, even with these gun-specific personality additions.  Furthermore, the comedy was pitiful throughout and the number of humor that passed the ‘smile’ threshold could be counted on one’s thumbs.  Really, the most enjoyable aspect of the anime is the fact that these girls are guns and they do gun stuff while being girls but really… beyond that… this anime is not worth watching.  It gets another episode to show how the gun angle of this anime operates and if any of the other aspects will improve but it doesn’t appear to be one I plan to keep around for much longer.  I appreciate that the anime was able to transition guns into girls and do it fairly well but anime needs to be more than one silly trick if it’s worth watching for 12 weeks.

Mysterious Girlfriend X  (Nazo no Kanojo X) – Mysterious Girlfriend X is another anime that will survive for another week, mainly because most of the first episode was so enjoyable.  But I may not want to keep it since it seems destined to run the path of mediocrity like so many anime within this genre.  The art style, one that resembles styles used in the 90s for comedies/romances, certainly is a plus but not as large when there are many other anime this season using retro art styles, too.  Though I didn’t think I’d like the characters much when researching this anime, they turned out to be surprisingly rationale and capable though I do wonder about the reason for tasting the saliva.  Maybe we learn that it’s his thing like the guy in Sankarea has a total zombie fetish?  Maybe.  And the comedy and story seem to be pretty humorous and the romantic scenes at the end were fascinating for how powerful it was in their relationship.  And those dream sequences are amazing, not only for the energy and emotion but for the environment that constantly moves along with the characters.  But I believe I’ll drop Mysterious Girlfriend X soon because it seems that the romance will progress like any atypical girl meets typical boy comedy/romance anime.  The romance might progress more than Acchi Kocchi but it won’t be enough distance traveled to matter and that the romance is the supposed story of this anime, something that troubles me given how it developed, seems to be a clear sign this anime won’t be for me.  The whole addiction to saliva and needing it every so often pretty much pissed me off as that seems to be the device that keeps these characters together or at least together in the first episode.  Not only is it incredibly forced but it was a problem they created quickly and then solved within a few minutes of its discovery.  And now the characters are forced to spend their time together like this?  Ugh, that’s even more revolting than all the saliva exchange in this episode and that’s saying something.  After the next episode, I’ll have a better idea of how the romance will progress and whether this anime is worth keeping but it doesn’t appear to be favorable.

Polar Bear Café – I can understand the appreciation for this anime, one that is clever with developing its setting with animals integrated into human society and having strong characters, but this anime was boring from start to finish.  The comedy, mostly delivered in a manzi fashion (two characters that go back and forth with quick jokes on misunderstandings, puns, word play, and other similar material) never elicited as much as a smile and more of a “yes, we get it, can we move on now?”.  And the repeated jokes, like the mother vacuuming Panda was not funny the four times it was used.  Panda, however, was fantastic and often made me smile, laugh, or at the very least think to myself that he was clever in his manners or responses.  Polar Bear and Penguin?  Ugh, they’re essentially the anchor that’s taking this anime to the depths for me.  The art came out decent but nothing special.  The plot doesn’t seem like a selling point on this series either but at least the music was enjoyable.  And that’s about it.  I wish I remembered more about this anime but it simply bored me too much to keep it.  Yeah, when the most memorable part of an anime, a comedy one at that, was how bored you were throughout, then it’s quite clear that the anime is not the one for you.

Once again, I apologize for the delay in getting these impressions up but there is only one more of these remaining.  There are a number of other posts needing to be added, too, but it will take some time given how hectic things seem to be all the time.  Until then, enjoy some of the great anime out there as this is a great season!

This entry was posted on April 13, 2012, 5:05 AM and is filed under 2012 Spring, Anime, First Impressions. You can follow any responses to this entry through RSS 2.0. You can leave a response, or trackback from your own site.