This week: observations on what’s wrong with Mouretsu Pirates and what can fix it, thoughts on Mutta’s goal in Space Brothers, the dazzling use of colors and lighting in Tasogare Otome x Amnesia, and a perfect balance for Lupin III: Mine Fujiko to Iu Onna. 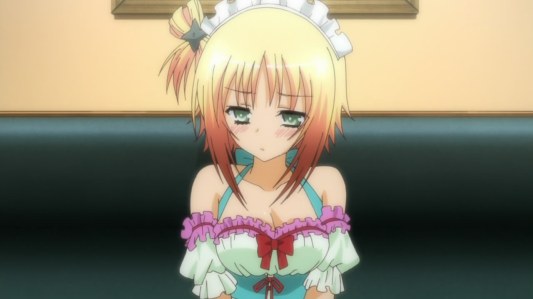 Kore wa Zombie desu ka? OF THE DEAD (Episode 4) – What don’t vampire ninjas do?  They pretty much as the scapegoat for each episode where there needs to be a plot device yet there is no best way to incorporate it into the story.  What happens next is the chosen material is then placed on the vampire ninjas and they just do whatever is needed to keep the episode going and the laughs rolling.  So far the vampire ninjas are in varying levels of the food industry (anyone forget the ramen?), performing arts industry (both classical and rock), and services industry (the pool) among their normal duties.  Exactly how does this happen and why it is always the vampire ninjas?  I’d love to see the series explore the other characters’ worlds and learn more about them than constantly going back to the three girls who do whatever the anime dictates they do.

Lupin III: Mine Fujiko to Iu Onna (Episode 4) – Derivatives of original series like this one are often challenged to find a happy medium where the series can feel both old and new without being too heavy on either side.  Consider this Lupin the Third to be rather balanced when it comes to this feature: it has the structure and stories similar to the old series yet the feeling of the characters, their energy, and the focus seems entirely new and refreshing.  The result is probably the most ideal way to do an adaptation by keeping some elements the same while changing the most unpredictable in a way to keep it exciting and innovative.  This Lupin the Third series certainly has been hitting all the right buttons this season but it can easily slip up if it begins to deviate too far from its path and go too deep into either being too old or too new.

Medaka Box (Episode 4) – Wow, Yatsushiro is cute.  Since she probably won’t be appearing again anytime soon, let’s just appreciate the fact that we were blessed by her presence in this episode.

Mouretsu Pirates (Episode 17) – Mouretsu Pirates drew its initial acclaim through its meticulous details about modern space travel and its comprehensive setting rather than any other aspect.  Though the pacing was indeed slow, it was also meaningful since it required time to explain its systems, laws, and provide explanations to why the characters were doing what they were doing.  Long forgotten are those serene episodes as Mouretsu Pirates have set sails for space adventures with its amusing cast of characters and substandard plot developments.  Yes, it’s no surprise to see the series has dropped off in quality considering those first episodes were impressive and centered around the dynamic Marika.  We’re subjected to another arc where our captain is overshadowed by minor characters and with a story that lacks the detail that made Mouretsu a favorite for some among other issues.  The anime is in some rough waters but it can correct its course and finish its voyage without losing too much.  What needs to happen now is an arc centered on Marika that can serve as a cap for the series that can also satisfy the audience that wants space adventures and appease the audience that wants pertinent details.

Space Brothers (Episode 5) – Becoming an astronaut is a colossal goal to Mutta and it certainly means a lot to him.  In fact, his entire life currently is centered on completing this objective and joining his brother in the emptiness known as space.  You could say it means a lot to him… but it means a lot more to someone else.  Mutta becoming an astronaut means more to Hibito than it does to Mutta.  Think about it for a sec.  Hibito is the one who is providing all the motivation for his older brother to become an astronaut and realize the dreams they’ve had since their childhood.  Hibito is telling everyone about his brother and how he’s training to become an astronaut, too, and though we’ve heard it from his neighbors in Houston, you can tell his speaks his words with pride.  If Mutta were to fail, he’d just consider another career change and move on with his life but what would it do to Hibito?  It would be devastating and certainly affect him more severely than Mutta.  It’s strange to think that the one who has the most invested emotionally in Mutta becoming an astronaut and to realize his dream is not Mutta but rather someone who is already an astronaut and almost in space.  It shouldn’t be surprising that if news breaks that Mutta is rejected by JAXA that he’ll brush it off like it’s nothing and laugh yet Hibito will be the one who cries. 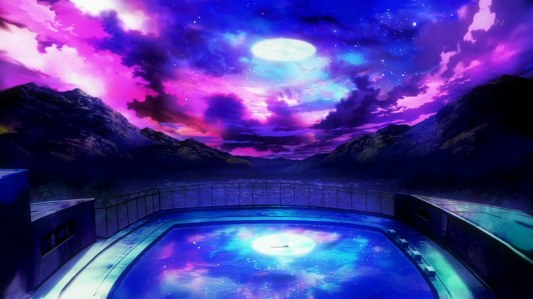 Tasogare Otome x Amnesia (Episode 4) – The use of colors and lighting in any anime always stands out to me and Tasogare Otome x Amnesia has separated itself from any other anime this season with its constant and brilliant use of varying colors and lights to enrich the atmosphere and generate visual interest in the same school scenery we see every week.  Among the most outstanding examples are the way the skies comes out and the swimming pool scene at night that ended this episode is certainly worthy of taking up this entire episode reviews.  That use of color and balance of light lies somewhere beyond dazzling and inspirational.  And that’s not all there was in this episode, too.  The way the colors gradually shifted during the classroom scene with Yuuko and Teiichi was marvelous.  Something subtle as playing with the lighting and colors in a scene is enough to refocus your attention and glue your eyes in on the screen.  It’s captivating the way Tasogare Otome x Amnesia uses its colors and lighting and is a reason why it’s one of my favorites this season.

Tsuritama (Episode 3) – Why Yuki? Why all this fuss over a boy who can’t fish?  Is it because he’s destined to fish whatever that lies resting in the bottom of the ocean?  No, not really.  According to Koko, anyone is capable of performing that feat and she’s ready to move on.  She doesn’t see the point in sticking with this fragile boy any longer and her only obstacle from selecting a new candidate for their mission is the persistent and stubborn Haru.  So what is it about Yuki that attracts Haru so much and why did Haru select him over a number of arguably better candidates, especially when Aflac (or whatever this duck organization is) is in hot pursuit?  I suppose there will be an exposition on this subject near the end but it’s curious to see Haru be determined with this boy when he’s constantly bouncing between fear and failure. 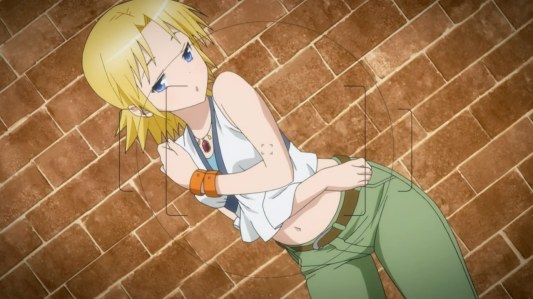 Upotte!! (Episode 4) – So how does this gun world operate with the outside world?  We’ve seen numerous examples where the girls use real historical events and details to explain various happenings in the story, so we know it exists in the real world.  And we’ve seen the outside world operates normally from when the teacher joined the school.  So does the rest of the world know about this school and their girls being guns and whatnot?  That photo-shoot and magazine with M16A4, does the rest of the world see it or is that only around the school and this secluded world they live in?  And what about the gun shop and all those other places surrounding the school?  Just how exactly does everything interact with each other and why isn’t the rest of the world freaking out about this school like the teacher constantly did when he first stepped on campus?  Uh, maybe it’s best to leave these thoughts outside of anime that just want to be stupid fun like this one. 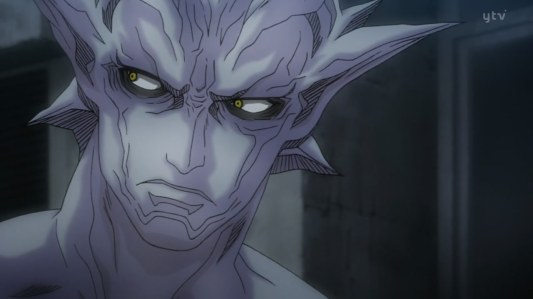 Zetman (Episode 4) – Whoever the Sweeper is, you’ve got a new fan.  Seeing him go around and kick ass like that, especially against the already overpowered beasts that are the Players, really excites me.  I am excited to learn more about this character, how he operates, what his origins are, and how he will affect the series going forward.  It will be especially interesting if he ever gets in a fight with Zet or Alfa considering he seems to be the most powerful being in the world at the moment and has an agenda that conflicts both our heroes.