While the story of Jormugnand documents the adventures of Koko and her select crew of proficient bodyguards, there are considerable flaws in the storytelling that otherwise inhibit the anime from thriving and fulfilling its vast potential.  Though the characters and content have been stimulating and effective thus far, considerable faults exist in how these affairs progress and ultimately how the characters react and change under these intense conditions.  Though there have been challenges and obstacles for the characters to overcome in these various events, there are hardly any challenges or obstacles in their stories.  That is, there are virtually no complications or resistance in Jormungand in regards to how the stories unfold and resolve themselves.

An example that illustrates this claim is in the story of how Valmet realized her revenge against the villain who slaughtered her company and tormented her soul.  Although Jormungand shows no reservations about promoting tremendous bloodshed and brutal carnage in every episode, the anime seems reluctant, hesitant, or merely timid about inflicting an equivalent counter on its established cast members, a trend that has been visible throughout every skirmish in this anime.  Regarding the ruthless killings, the anime has zero qualms about seeing reputable villains like Chang or previously with Chinatsu be murdered as a segment in the story but it is absolutely adamant against the same outcome happening to any of Koko’s underlings.  And even when positioned in an ideal situation for which a character to meet their end or capture them for questioning or providing some resistance or any negative outcome, a dependable and expert assassin fails despite firing her handgun at point-blank while landing most her bullets in the vulnerable torso of her target.  The end result is our heroine achieving her goals with the only set back of suddenly appearing in a hospital while well on the road to recovery.  Her story began this episode with her wanting to take revenge, her taking revenge, and her returning home all like it was a simple trip to the grocery store for some milk and sugar.  It’s moments like this that painfully reveal the lack of difficulties or challenges for the stories in Jormungand. 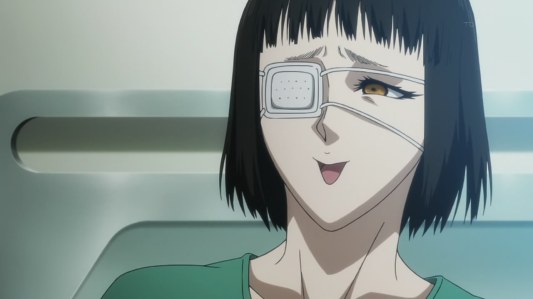 So, what is it that I’m looking for that would have satisfied my desire for a real story to be shown in Jormungand?  Well, a number of obstacles could have appeared to make this tale of revenge more gratifying.  The sight of Valmet being overpowered and losing to a mid-boss or the main-boss would have shown that Valmet is still too early to obtain her revenge.  The fact that she was able to waltz in, murder every living thing, and do this all without as much as a sweat leads me to wonder how worthless this story is considering how effortless her actions are.  Another possibility could be that she missed Chang and that her revenge would need to be placed on hold, thus causing the character more frustration at the prospect of her ditching Koko for a failure of a mission.  That or Valmet could be placed in a predicament where she is forced to choose between returning to Koko for her required assistance or to continue with her current mission and to murder Chang would have led to some interesting internal debate over whether her sights were placed on her troubled past or her bright future.  But no, the story seemed satisfied with merely going from point A to point B without as much as a bump, curve, or speed limit.  I can’t help but wonder how lethargically the writing was in this part, akin to a script saying “Valmet wants revenge >> Valmet gets revenge >> Valmet rejoins Koko” and never giving the sequence a second thought.

And this leads to a larger point in the anime that ties in with some previous examples regarding the action of the anime: the most noticeable flaw in Jormungand is the lack of challenges, problems, and impediments in its story.  Instead, Jormungand relies on episodic tales which feature the familiar cast being caught up in some dangerous and deadly situation but always finding a way out without any more damage than a bandaged butt.  It’s true that the characters face individual challenges, such as Valmet being targeted by the sniper, but the story itself always receives a free pass and vrooms down the easy street without the slightest hint of an obstacle.  The most the series has done in regards to this were trapping Koko in with the bankrupt rebels in episode 2, being trapped inside the hotel with assassins afoot in episode 4, and needing to avoid Dragon’s onslaught in episode 10.  Coincidently or not, those are also some of my favorite or most appreciate episodes in the series in regards to what they were able to do.  The rest of the stories were straightforward storylines that never really generated any excitement or energy.  And episodes like that have caused the series to suffer as a result, thus making this the biggest liability in Jormungand.  But thankfully, this error is correctable and can be performed quite readily.

With the second half of Jormungand scheduled for the crisp, cool evenings of our approaching autumn, we can hope to see improvements in the anime in terms of storytelling.  Though ultimately up to the manga this anime is based off of, logic would assume that the storytelling would develop along with the story as they approach its climax and the story begins to carry more weight and reveal itself.  What the story needs is not more tension, danger, and a loss of invincibility for the cast (though that would help considerably), Jormungand needs to show Koko and her team face adversity in their actions and for them to lose at something.  Show them get into a situation where it forces the characters to think and change as a result or for them to show some division and a crack in their camaraderie.  Maybe there’ll be a situation where characters betray each other or create mistakes that endanger each other in dire situations.  Whatever the reason, I want to see an outcome where it doesn’t work out for Koko and company or one where it requires them to accomplish some challenge or overcome some adversity or manage some difficulty in order to advance.  Then, everything else regarding the poor action and structureless story will begin to resolve themselves, too.  This all, however, ultimately depends on the manga and the story already established for this anime.  Should the anime reveal itself to be one of the more memorable and acclaimed anime of this year, then these recommendations will hopefully be incorporated in some manner to improve the anime in its second season this autumn.  Should it not be in the future of this anime, then unfortunately, Jormungand will continue to suffer as a result and we’ll be left wondering what could have been for an anime with such awesome and wasted potential as this one.

And while I’ve been highly critical of Jormungand all season, each of my blog posts pointing out some errant dissatisfaction and focusing on it with details and suggestions, Jormungand has become one of the more enjoyable anime of the season given what is has done.  Koko has been a fabulous lead given her charismatic nature, playful tone, and ability to think on her feet.  She’s the type of character that an anime builds itself around and there have really been no faults on who she is and what she’s done for this anime.  Moreover, the cast has grown up along with Koko and their allegiance to her has been clarified on an individual basis with each character getting their brief time in the spotlight at random occurrences.  Though the action is indeed mindless, unnecessary, and often unrealistic, it has made episodes more enjoyable given the fact that they’re elite soldiers trying to kill each other.  While it has not been perfect, it is nonetheless appreciated.  The comedy has been infrequent but always remains intact to provide smiles throughout and even a few laughs from time to time.  And there are no real faults on the art and music, especially given the gorgeous scenery the anime has displayed throughout.  Overall, Jormungand is an anime I spend time critiquing since I’ve been enjoying it so much.  Rather than go on and on about what I enjoy about the series every week, I feel the need to go on every fault I find and see what I would do differently in order to maintain the same level of enjoyment and excitement while addressing whatever issue I find.  I don’t mean to rant on the series constantly, but for me to identify each weakness and look for possible solutions for each.  I am excited to continue this anime again in the autumn and I almost wish the anime weren’t taking a break over what appears to be a rather bleak summer in terms of anime.  Until then!

This entry was posted on June 29, 2012, 2:36 AM and is filed under Anime, Jormungand. You can follow any responses to this entry through RSS 2.0. You can leave a response, or trackback from your own site.