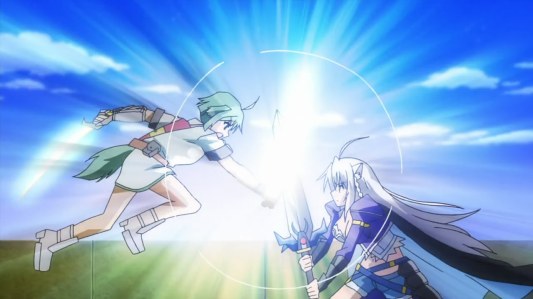 Fraudulent and insufferable, notorious and unforgivable, the most infamous and loathed thing of anything anime (or if not, well within the Top 3) is something I’ve come to dub Shounen Fight Syndrome.  Shounen Fight Syndrome (SFS) is perhaps the worst offender when it comes to anime, a collection of mismanaged, inferior, and pathetic clichés bundled together for an unsatisfying, worthless conclusion.  Based on lethargic writing and devaluing its character, SFS has plagued numerous anime within the fighting genre and Dog Days’ is no exception.  With nearly a textbook-definition of SFS in this episode, now’s the ideal time to cover a topic I feel passionate and enraged about. 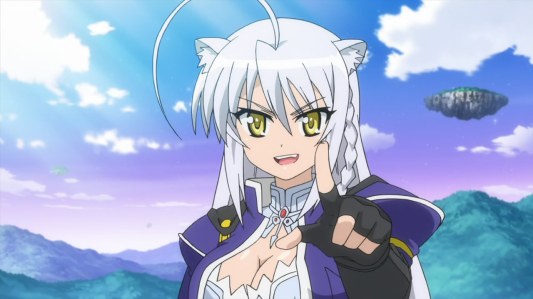 So what is Shounen Fight Syndrome?  SFS is one of those classic anime fights where one side, often the protagonist, is outmatched when facing an opponent perceived to be (or is) more powerful than them yet, in the end, they end up winning against all odds.  This alone would be an empowering tale in which good triumphs over evil, but SFS has some additional signs to it which cheapen the experience and leaves me fuming.

With those signs now identified as the hallmarks of Shounen Fight Syndrome, it’s clear to see where Dog Days’ succumbed to this heinous method of storytelling in its most recent episode.  Like many of the anime and mange before it, it nailed every point in a clichéd fashion that left me disturbed and distressed.  So what is about SFS that I absolutely hate? 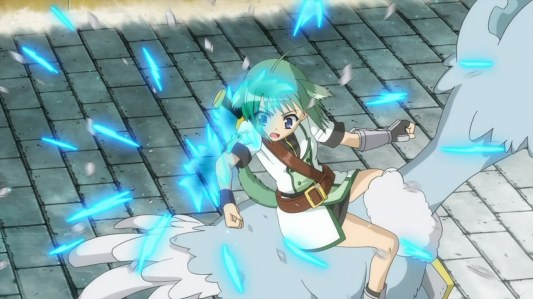 What makes Shounen Fight Syndrome so despicable and unentertaining is that it is lazy writing and uninspiring storytelling.  It is the author’s excuse for wanting to write a remarkable story fixated on a pivotal fight based on character ideals but having no clue how to properly do it.  Sure, they’re able to get their ideas down, for the most part, but the conclusion just screams them saying, “Well I can’t figure this shit out,” and giving up.  It’s just ‘character pulls out some new move and wins’ and that’s it.  It’s the equivalent to taking M. Bison down to 1 health while you’re still at full and, right before landing that final hit, the screen flashes some pretty colors and your character is dead and you lose the fight.  Also, no second chance and no continues.  The conclusion to any fight featuring the symptoms of SFS shows the incredible weakness in the author’s ability to narrate a story; that they’re lazy and they don’t want to show the winning side overcome their struggle and prove that their ideals are correct.  It’s just the author escape from wanting to tell a good story, by inventing a new move and ending the fight with it.  It’s easy to see, the author didn’t wanna put in the work to finish their story.  It’s a disservice to the audience, the fans, and the characters themselves.  Oh, the characters, especially the characters. 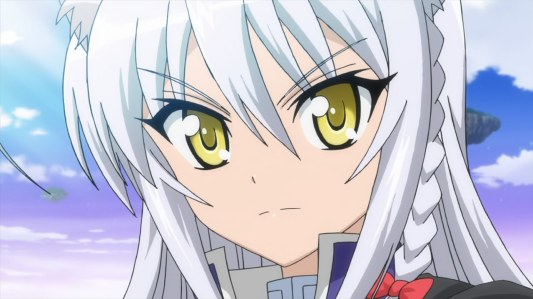 Not only is Shounen Fight Syndrome a disgraceful form of storytelling, it’s a dishonor and insult to the characters themselves.  Had this been anything resembling a real fight instead of some scripted excuse of one, then the characters would’ve remained consistent throughout and not molded to fit the cliché that the author penned.  Characters are smart and when they’re fighting, they fight to win.  With the good side rendered immobile and useless, there’s no excuse for the bad guys to not finish them off then and there before yielding to their pride and gloating.  For the good guys, they have an excellent opportunity for some character development but the author discredits them and forces them to use a new, one-use, ‘get-out-of-jail’ attack that relinquishes their chance of overcoming adversity, climbing back to the top, and truly triumphing over evil.  And why does the good side always need to be reduced to a fake defeated state before choosing to summon some new, magical, emotional strength which leads them to victory?  If they knew they were going to be outmatched, why not do it sooner, before all the pain and suffering?  Wouldn’t they be smart enough to do otherwise?  And why can’t the baddie try to dodge it or retaliate like they were able to do all fight?  It makes no sense to any degree.  Well, in order to adhere to the cliché that is SFS, there needs to be some character inconsistencies and a failed opportunity for the characters to develop.  Had the writing been average or even substandard, then the characters would’ve behaved normally as they do every other time outside of SFS.  But no, in order to fit into the worst stereotype in all of anime, the characters need to be reduced to mere puppets of their former selves.  And that’s just problem number two with SFS. 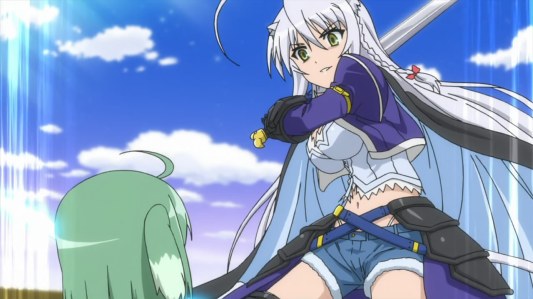 Problem number three for Shounen Fight Syndrome looks at the value gained, or rather missed, when evaluating the fight.  Already established that there is zero merit to the writing and nothing gained for the characters, what remains is the factor of entertainment or how enjoyable the fight is.  And while virtually every fight in anime has some form of entertainment embedded in it, as it is the nature of watching characters fight in anime, the whole formula of SFS does its best to mitigate whatever joy can be derived from such a battle.  Whereas the aforementioned fight is entertaining, the result of any fight suffering from SFS removes any and all amusement from the fight by leaving it with an unsatisfying conclusion.  As the character receives no development from overcoming such an opponent in such a cheap and effortless way, the audience receives no reward for watching it.  Being lazy with the writing, storytelling and the characters is one of the quickest ways to devalue a story and SFS is no exception; everything just turns to shit and the whole fight before has no meaning or significance with the deus-ex-machina conclusion that we were given.  ‘So what if the bad guy dominated the fight and essentially killed the good character?  Everything you watched and liked from that fight was a lie.  Yup, served no purpose whatsoever.’  You’re better off with just a block of text explaining the fight since you can come to a more creative, more entertaining conclusion than what the author resorted to when constructing another inexcusable attempt for entertainment in an anime. 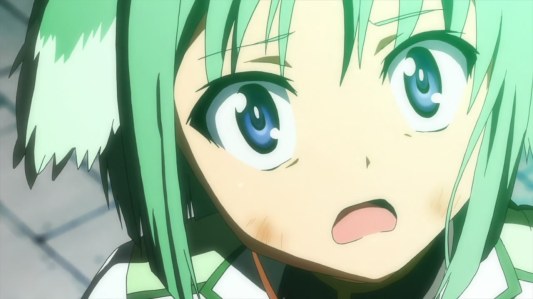 And that, in a basic sense, is Shounen Fight Syndrome.  Of course, there is more to the generalized phenomenon than the points mentioned above and there are variations and unique features that appear in some anime and not in others.  Considering just these points as the minimum, one can probably recall a number of other anime which feature such a static form of storytelling.  Hell, even some of my all-time favorites fall victim to such a disgusting form of storytelling.  However, all is not lost with such a cliché. 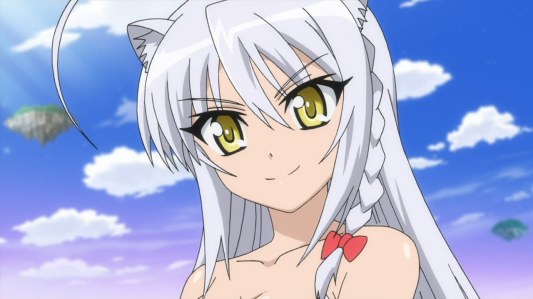 The best way to overcome such a misdeed is for the author to prove their worth in a following fight.  Doesn’t matter the circumstances or the conditions, as long as the author can prove they have the effort and creativity necessary to narrate a worthwhile story and meaningful fight, then it shall be forgiven.  Not forgotten but still forgiven.  As simple as proving your worth is all that’s needed to get past SFS and, many times, the author is able to do just that and write something of value and meaning for the audience to enjoy.  Dog Days’ is nowhere near finished and has a number of fights remaining, ample opportunity to prove its worth as a fighting anime and overcome this catastrophe.  Knowing the results of the previous fights and how the series presents itself, it should only be a question of time before Dog Days’ redeems itself with a fight of significance and merit.  Let’s just hope that time is sometime soon. 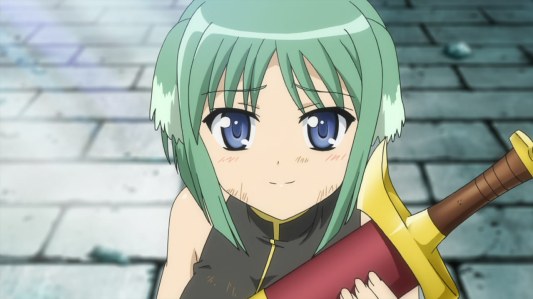 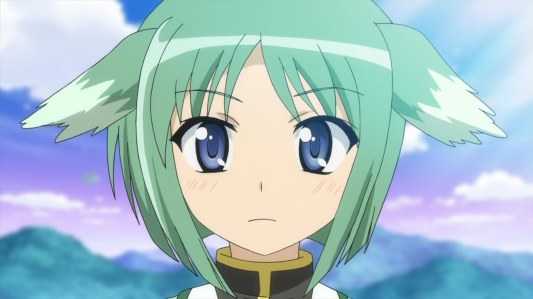 Despite being one of the prominent and recognizable attributes of the series, the animal-ears that just about every cast member has remain static and immobile.  In fact, they seem more akin to decorations than real ears for these characters.  As you’d expect animals to show their emotion through their ears, perking them up, shifting them forwards or backwards, or twitching them, you’d figure Dog Days’ would do the same since it’s such a unique and vendible trait to the series.  So consider it a success in this episode with Eclair having a number of motions with her ears to help enhance and illustrate her emotions.  Ranging from embarrassment to irritation to even surprise, Eclair’s emotions were matched with the motion of her kemonomimi.  Hopefully the series continues on this matter and makes a trend of it since it would do well for the characters and anime in general, but such unnecessary and insignificant animation (you could already tell her emotions without the aid her of ears moving) might be considered trivial for the anime and it’ll be back to normal from here on out.  Oh well, a nice, little present while it lasted. 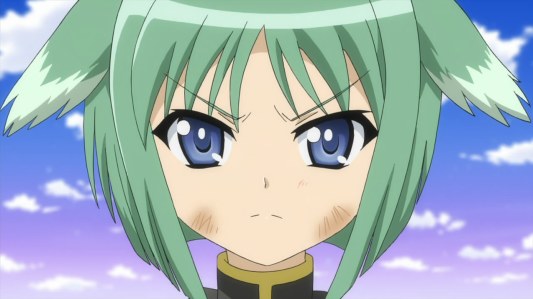 This entry was posted on September 6, 2012, 9:24 PM and is filed under Anime, Dog Days. You can follow any responses to this entry through RSS 2.0. You can leave a response, or trackback from your own site.