This The previous week: the wonderful minimalistic approach to romance in Hyouka, calling into question the usefulness of the secret treasures in Sengoku Collection, wondering about the difference between split and continuously running anime with Rinne no Lagrange, and easily my favorite scene in Sword Art Online.

Sword Art Online (Episode 11) – I think that piggyback riding scene will be my favorite moment of SAO.  Even with another season ahead of it, I don’t think anything will beat out this cute scene between Kirito and Asuna.  It doesn’t make up for the steady decline of the series to date but damn was that scene adorable. 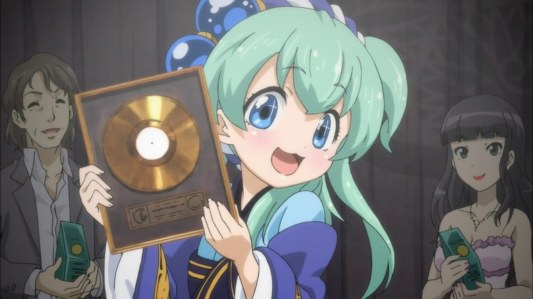 Sengoku Collection (Episode 24) – Though the secret treasures are phenomenal manifestations of talent, aspiration, and the greatest of powers, life is pretty okay once they’ve been stolen by Nobunaga.  As seen with Tokugawa, the success of her life has remained unchanged without this abstract power and she’s continued to strive to reach her goals which have no changed to match and surpass Rosary.  As she said, she’s achieved her original goal of becoming the top idol in Japan and now has her sights set beyond the borders of the country she loves dearly.  Seeing this determination, resolve, and success helps call out the purpose of the secret treasures beyond the ability to send one Sengoku-era general back to their appropriate time.  Are these secret treasures just indicators that the character has reached a certain level of power or do they play any special role in making the general a better or superior person?  With Nobunaga having collected several already, she doesn’t appear to be any stronger, more talented, or a better person, so perhaps these treasures are worthless beyond being the chosen currency by animal-earred shrine maidens for time travel. 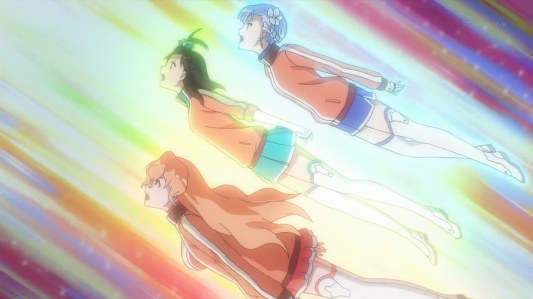 Rinne no Lagrange (Episode 23) – Being split into the Winter and Summer seasons, Rinne no Lagrange is one of the few anime experimenting with this trend of showing one serious continuously with a season off in the middle.  I often ponder about how much this changes an anime from being shown continuously through two consecutive seasons as do most of the anime with more than one season planned do.  What I tend to believe is that the season off allows the series to take a break, research what it did well and what didn’t, and allow the series to put its efforts into restructuring the series and making the second half better or more enjoyable than the first.  However, that break effectively destroys the momentum and consistency that the whole first season built up, thus making the return of the series somewhat of a gamble given all the other anime and real life endeavors that happened between the two episodes.  I suppose the differences are minimal or variable among the population of anime fans, but I can’t help but feel that I would’ve enjoyed this anime more had it been two consecutive seasons and not split between the Winter and Summer.  The reasoning here is that I failed to enjoy the opening episodes of this season despite loving the end of the first season and having high hopes for the return of the series all Spring.  I probably would’ve felt the same disappointment given the first few episodes of this season but at least I wouldn’t’ve had all that time to hype the series as I did over the long Spring break the series had.

Natsuyuki Rendezvous (Episode 11 [Finale]) – Well, that’s kinda a depressing ending.  Seems like everyone in the series is dead now and Shimao still wanders the face of the Earth without any redemption or chance of finding peace.  Makes me wonder how long he’ll be destined to walk the world as an invisible ghost and what he’ll do.  Perhaps he’ll monitor the progress of his grandchildren and watch closely over his flower shop, but you figure there’s not much else for him to do now that his love and rival have passed on.  Thinking about this perpetual and never-ending loneliness is certainly a frightening prospect, but the series seemed to downplay it with him floating happily up to the sky.  But it’s not like he’s going to heaven or fading out of existence, he’s still as there in the end as he was when at the series began.  If that were the case, the series would’ve shown that but no, he’s still there as the series fades out and the credits roll.  Yeah, he’s still a ghost, lost on Earth, without a chance at finding peace now.  Pretty haunting when you think about it.

Hyouka (Episode 22 [Finale]) – I have to applaud Hyouka for taking the minimalistic approach to romance, not only in its finale, but throughout the series.  Though the elements were obvious and ubiquitous from start to finish, the anime never overplayed the complicated relationships into something grandiose or unnecessary but kept it a confusion yet realistic friendship between two pairs of students.  What helped explain this approach were the revelations presented by the two male characters in these two final episodes, one in which Satori expressed his worries and perception of his relationship and Houtarou choosing to remain the energy conserver he has always been rather than jump at the chance to spend his life with Chitanda.  Seeing these two speak their minds helped solidify the minimalistic approach to romance the series, at least from the view point of the male characters.  I wish we saw the same exposition from Chitanda and Mayaka, too, as their perspectives are equal to those of the guys in this anime, though I can’t help but feel they’d be less interesting and more normal given their personalities and behaviors throughout the anime.  Doesn’t mean that they wouldn’t have some significant or amusing story to tell regarding their perspective on their romance but it didn’t seem to be something noteworthy for the anime to go over and thus, a point that was ignored.  Still, I appreciate an anime sticking with its minimalistic approach to romance for the duration of the anime and for doing an outstanding job with it, too.  I know others would’ve rather seen a warmer, happier ending, one where Houtarou and Chitanda hook up, but dammit, these are the kinda romance endings that I like, so let me have this one just once!

This entry was posted on September 23, 2012, 8:58 PM and is filed under 2012 Summer, Anime. You can follow any responses to this entry through RSS 2.0. You can leave a response, or trackback from your own site.