“Does it really have to be a giant robot?”

Well, isn’t it obvious?  What Akiho is doing is much more than just building a giant robot; no, what she is trying to do is something that no mere normal robot can do.  Her goal isn’t limited to just constructing a walking steel behemoth but to manifest her hopes and dreams into a living symbol of inspiration, aspiration and astonishment.  It is in these giant robots that we find much more than just metal, wires, and plasma weapons with infinite ammo.  No, these giant robots serve as a beacon of hope, an ambassador of our dreams, and reflection of how we always strive, or should always strive, for greatness and glory.  It is this that makes giant robots more than just giant robots.  That and they do look pretty damn awesome.  So yes, to answer your question Ms. Vice Principal, it really does have to be a giant robot. 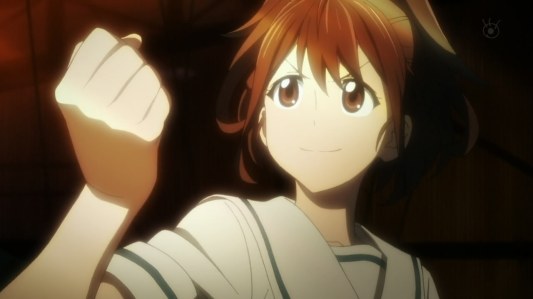 But no, this piece on the opening episode of Robotics;Notes will not be an article on why giant robots are awesome or a critique on the mecha genre that is near and dear to the hearts of so many.  I’m sure that piece has been done before, somewhere, and would be better than anything I could possibly write.  Rather, I find Aki’s passion and enthusiasm towards GunPro1, the current project of the Robotics Club, to be quite remarkable, exceptional even.  All we know about her so far is that Aki’s sister started the project 8 years prior to the present setting and that, as a child, Aki loved everything mecha judging from her Gunvarrel action figure and robot themed bedroom in the opening sequence.  I’m certain we’ll receive some clarification in the form of a backstory to explain her current and unyielding energy, but that’s a story for another episode.  I’m fine with that, but what interests me the most is why her project, and the whole purpose of the Robotics Club, needs to be a giant robot.  Why would something that’d be smaller, cheaper and easier, not to mention actually be manageable given the size and direction of the club, not suffice for Aki?  Well, though she wasn’t able to answer the question directly in the anime, there are some evident reasons why the Robotics Club needs to build a giant robot.

Perhaps the most obvious reason to finish the giant robot is because this is what Aki wants to build.  As simple as it seems, it’s the main reason for why the project needs to continue as a giant robot and nothing else.  Should the project change per the vice principal’s recommendation, nothing will get completed; no robot would be constructed.  What would happen next is Kaito would continue playing Kill Ballad and Aki would revert back to working on GunPro1 despite being advised not to.  The whole motivation behind the project is the main reason why the project is alive today.  Aki is inspired to build a giant robot; she will not work diligently on some miniature or human-sized robot.  This is what she loves.  That enthusiasm and energy is the reason why the club still exists, and it exists solely to erect a giant robot in the model of Gunvarrel.  If anything changed regarding the giant robot, the club would cease to exist.  So, to help explain why it needs to be a giant robot, one reason is that is what needs to be built. 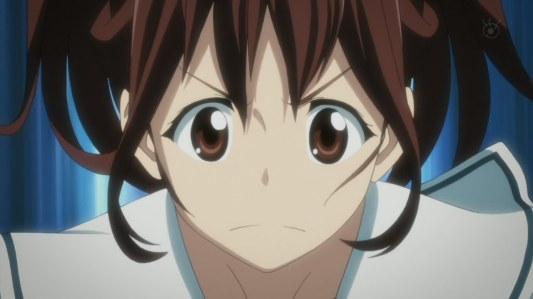 A second reason to explain why it needs to be a giant robot is that the project has already been started and the robot already under construction.  That means that the planning and design stages of the project are already completed and the club is well underway into construction, already fashioning a steel skeleton and body.  We are unsure of what’s left but the robot looks pretty well constructed right now.  So, given its current status and where the club is in regards to its plans, why would they stop and begin a new project?  It doesn’t make sense, especially since this construction phase is nearing its completion and what remains is testing the robot to see how it functions.  It doesn’t make sense, coupled with the previous point, to drop this project and begin again with a newer, smaller robot.  And while this reasoning is simple, too, considering that they’re almost done constructing a giant robot is another reason why their project needs to be a giant robot.  Scrapping this project now would be catastrophic. 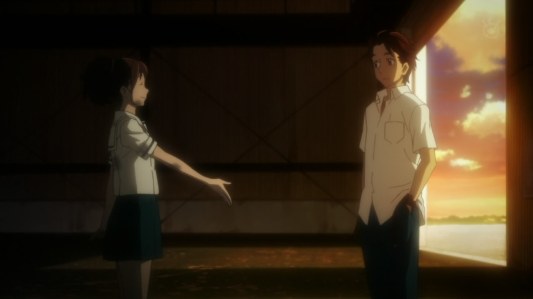 So, what other reasons for constructing a giant robot are there besides Aki’s personal and unknown reasoning, her current, passionate motivation, and the progress already made on ProGun1?  Well, seeing as the previous three examples are rather simple and all aspects of Aki’s response to the teacher (though not as clear or elaborate), there also are some weaker, abstract reasons that support Aki’s stance regarding the rationale for building a giant robot.  For one, a giant robot is what other people want.  With the goal of the project to display the robot at the Tokyo World Expo, it makes sense to want to tailor your project to what the public wants.  And with the current craze behind giant robots, why not build one to impress and satisfy the people you’re presenting this to?  Another theoretical argument for constructing a giant robot is because it is innovative.  Though I’m largely unfamiliar with the setting, I don’t recall there being any other giant robots around and only miniature robots like the one Aki’s sister made for her competition.  With an unexplored frontier ahead of these students, why not push them to create something groundbreaking and extraordinary with their talents and energy?  And if you needed any more reasons besides those listed, why not build a giant robot just because it’s cool?  Hell, that alone should be reason enough to get some kids to get together and build a moving titan made of steel.

And with that, we have a number of reasons why Aki and her Robotics Club needs to build a giant robot.  And while this may be enough for Aki and Kaito, it may not be enough for someone who doesn’t understand what giant robots are.  The vice principal doesn’t share the same enthusiasm as Aki nor can she probably see Aki’s hopes and dreams expressing themselves through the robot.  For someone like her, she just doesn’t share the passion, and without having that integral piece already embedded in your heart, it may be impossible to convince her otherwise.  Aki’s argument quickly covered three of the main points in this post, that she has her personal reasons, she’s motivated to complete the project and that the project is already near competition, and that still wasn’t enough to convince the vice principal.  Of course, this is all in regards to the current budget submitted by Aki, so perhaps if the argument was shifted or changed, this discussion might not be warranted.  Who knows, maybe the vice principal is a huge fan of giant robots, too, but is just being realistic with the project regarding the funding available to her club… Nah, if that were the case of her being a giant robot fan, she probably would’ve shredded the budget proposal, jumped up on her desk, and shouted at the top of her lungs, “Hot damn!  We’re going to build a giant robot!” while waiting to receive five from a startled and confused Aki.  That and no giant robot fan would settle for anything less than a giant robot.  It’s gotta be a giant robot.

I’ve been hyping Robotics;Note recently largely based on the fact that a manga version of it has been running in the recent issues of Ultra Jump.  Turns out that after watching this first episode of the anime that the manga and anime are completely different.  It wasn’t until then that I realized that the manga is currently a side-story to the main plotline, what the anime seems to be covering, and focuses more on Frau, the twintailed blonde that we saw briefly in the opening scene and a few times in the opening sequence.  Well, turns out I was wrong about what people should expect from the first episode of the anime, but that doesn’t change my stance on why I should be hyping the anime further out.  Sure, the two are different and I’m not even sure that the manga will be covered in the anime, but it is an indication of what we should expect once we’re in the body of the series.  Kaito certainly has improved as a character, taking on more of the role from what we’d expect the main character to do and Aki is fantastic as a support, helping flesh out the character dialogue and support the characters on an emotional level, too.  And Frau, oh my God, Frau… there’s a reason she’s already my favorite character in Robotics;Notes and I hope we can see her shine like she has in the manga.  While her backstory does show some depth and difficulty, it is her humor and amusement which sold me on her character.  It’s these type of secondary characters, the ones that make me laugh and smile the most, that win me over and enhance the series for me.  The experience deepens and I enjoy the anime more as a result.  And because of that, I’ve been hyping Robotics;Notes recently based on the manga I’ve been loosely following.  It is worth nothing now that the two are different (actually very different), but it still doesn’t change the fact that I am enjoying Robotics;Notes and that I want to spread the word about it.  So though the details are unalike, the message is still the same.

This entry was posted on October 13, 2012, 5:43 AM and is filed under Anime, Robotics;Notes. You can follow any responses to this entry through RSS 2.0. You can leave a response, or trackback from your own site.