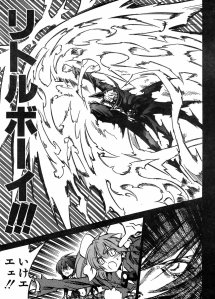 Fight are fought and won with Fragments.  The stronger Fragment, the most likely you are to win your battles.  But Fragments alone aren’t necessarily the only factor, nor even the central factor, when resolving conflicts in Needless.  It is how these Fragments are used, through intelligence or innovation, which ultimately decides the victor and the defeated.  So, is it possible to win against a Needless with not only one of the strongest fragments but also one of the greater intellects, too?

As with any fight in Needless, the Fragments are the battle.  Though a series of physical and special attacks, enhanced by their superior strength and aided by their God-given abilities, a fight is won or lost.  However, Fragments alone are not the primary factor when determining who emerges triumphant.  It is the intelligence behind these Fragments that is the most significant aspect of battle and we have seen this time and time again when lesser or disadvantaged Fragments overcome some of the mightiest and most imposing Fragments.  It requires understanding the nature of one’s Fragment and utilizing one’s creativity to innovate a new way to use one’s abilities to outsmart, damage, and eventually defeat the opponent.  Of course, intelligence is not the only factor to determine the winner, either, seeing as absolute strength, motivation, situational circumstances, luck, and more all play a part in every battle of Needless.

Presently (or in this case, with Chapter 104 being the current chapter), the manga is positioned in a fight with some of our heroes, Cruz, Blade, Eve, and Disk against the lonesome but impressive and always intimidating Riru.  Without understanding the situation or the characters present, one might assume that Cruz and friend are certain to win considering that they have arguably the brightest and most knowledgeable characters in the manga, in addition to two of the most powerful Needlesses, entering this fight.  However, Riru matches these talents, if not exceeds them, with her intelligence, comprehension, and fighting capability, not to mention she possesses the most powerful natural Fragment with Psychokinesis.  It is in this fight that we’ll see, and have already seen, how a combination of strength, special ability, and intelligence are what make for the greatest fighters in Needless and who will ultimately win this fight.  At this point, however, it appears as though Riru is the one who is the strongest and smartest Needless present.

So, now, the question becomes, how exactly will Cruz and company overcome Riru’s strength and intelligence to win this fight?  As we’ve seen in the fight thus far, Riru has a tremendous understanding of her Fragment and how to fight with it, fending off attacks of all sorts from both Blade and Eve.  Her intelligence is also exceptional, seeing as she’s able to quickly gather and analyze data from her opponents in order to mitigate their attacks or bypass their powers altogether.  Riru has been hyped as the strongest Needless in the world next to Arclight and now we can see exactly why.  How exactly can Cruz, Blade, and Eve overcome such a formidable and matchless fighter?  Well, as the theme of this post is on the intelligence and creativity behind every fight, Cruz and friends will need to use their brains to combat Riru.  They may not need to find tricks or innovation in their Fragments but rather, to use them in clever or concealed ways.  Cruz’s decisive effort ultimately allowed Eve to survive and Blade to launch a counter-attack which disrupted Riru.  From there, Blade used his cunning to feign an attack and use Riru’s counter to backfire on her, thus opening the large cocoon.  It’s clear that these are what’s needed for our protagonists to defeat Riru, something that they can do to deceive or trap Riru by feeding her overconfidence or bypassing her Psychokinesis.  However, Riru has shown her brainpower a few times in this battle already, adjusting her strategies to combat her opponents, so it will require quite a bit to overcome the most powerful opponent yet.  However, as we saw in this chapter, there are some flaws that can be exploited and need to be exploited in order for our heroes to win.  Then the question becomes, can they pull it off?

So, yeah, I realize that this chapter came out in August and here it is being posted in October, after chapter 106 has been released, meaning this is way, way late.  I want to apologize for everyone who’s enjoyed reading my monthly posts on Needless regarding these delays.  Hopefully now things will be on track regarding these Needless posts, so things should be going back to normal from here on out.

As for my thoughts on the chapter, well, I can’t be very honest now, can I?  I’ve already read and reread chapters 105 and 106 quite a few times now and already know the outcomes of all these questions and mysterious events, or at least I think I do, so these thoughts are not really the pure, genuine reactions that I had back in August when the chapter was published.  However, I’ll summarize a few of those point quickly based on what I remember.

First, Riru is extremely overpowered given her Fragment and intelligence which is why I selected the theme for this post.  Given her seemingly invincible character, it really speaks to how devoted she is to Arclight given how she could create her own empire elsewhere or even usurp Arclight’s at any time given his weakened body.  She’s remarkable in that regard and I’d like to see more on that, more than what was shown in Needless Genesis.  Furthermore, the whole background with the Eve Project is an absolute shock but certainly a pleasant one, especially for what it entails for future chapters.  And the battle throughout this chapter proved to be both worthwhile and entertaining.  There was actually some back-and-forth this time which shows the strengths and weaknesses of each character which makes for a convincing story through dramatic storytelling.  Seeing the fight go both way is how fight should be directed and I’ve really enjoyed this fight thus far.  And I’m certain that is to continue (because I know it has, heh heh).  And, uh… that’s about it.  And so, with that, it’s time to finally wrap up my thoughts on Chapter 104.

This entry was posted on October 21, 2012, 5:50 PM and is filed under Manga, Needless. You can follow any responses to this entry through RSS 2.0. You can leave a response, or trackback from your own site.