In planning and preparation, Aki is not facing her reality.  Safely bound within the realm of her thoughts and imagination, Aki can freely dream of constructing the greatest robot to ever exist on this planet and toy with the idea of how her outdated hobby robot, with only one week to prepare, will be victorious in the exceptional Robo-One fighting tournament.  Of course, with these delusions of grandeur, Aki is bursting with confidence and excitement born through obsession and ignorance.  And when reality hits, it his Aki hard, and she faces the real world, one with a robot project that’s stalled, a hobby robot that’s obsolete, and her club facing dissolution.  In spite of all this, however, Aki sees it with a smile and gives it her all.

Akiho’s greatest attribute is probably her unique combination of resilience, determination, fortitude, and passion.  Her willpower alone is what drives the entire anime; the current storylines of winning the Robo-One fighting tournament, saving her robotics club, and completing GunPro1 are all established from her character, not to mention she’s the only one working to accomplish these goals.  And whenever she faces a problem, she doesn’t back down or complain about her appalling luck or pathetic and apathetic club member, Kaito.  No, what Aki does is she is show her unparalleled adversity; she tackles the issue with her astounding positive energy and never gives up, even when her body is ready to.  It’s this optimistic and enthusiastic behavior which is what keeps the story of Robotics;Notes alive.  Without it, GunPro1 would be abandoned in a deserted hanger, the robotics club would disband, and Aki and Kai would have nothing left but their unbalanced, slightly awkward friendship.

However, in the second episode, we saw the first glimpse of what might be some cracks in Akiho’s robust nature.  When dealing the perplexing and archaic controls of her reconstructed hobby robot, Akiho finally showed some signs of weakness and misery.  With the reality of her robot before her, attempting to train herself with its controls, Aki realized the reality of her situation and could finally feel the weight on her shoulders.  Even though she accomplished her goal of earning enough money and begging for a decent discount (not to mention a rather generous shopkeeper, too), there are still more hardships and obstacles in her way.  The question is, as these things catch up to her, will we see a change in her personality and behavior?  That is to say, is Akiho beginning to run low on her ‘genki fuel’, the energy that keeps her positive and going?  Perhaps, though it seems like it’s Kai’s duty to help her out when reality hits and Akiho realizes the despair of her situation.  If Kai can manage to assist Aki in the areas where she can, or rather, where he needs to, then Akiho should be able to recharge her batteries and withstand whatever’s thrown her way, be in another daunting challenge or hiccup in her plans.  Yes, Aki needs Kai to be by her side in order for her to remain the cheerful, spirited and delightful girl we’ve come to love and enjoy. 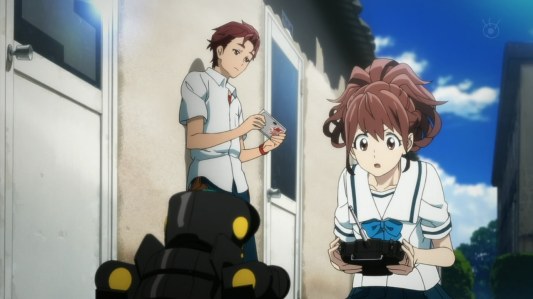 So, yeah, what was up with those controls for the hobby robot, Tanegashimachine-3?  I mean, why have such an archaic and difficult system for a recreational toy?  I’m not sure how many people would want to purchase something like that with such a confounding and confusing interface to operate it, not to mention the price alone would deter people away.  And isn’t this supposed to be the future?  Wouldn’t the companies that manufacture these toys create a controller that is simplified and allows the robot to auto-correct itself and have preset movement functions?  Instead, they opt for a bulky handheld system with QWOP-like controls for everything.  Actually, QWOP might be easier to control than these hobby robots.  Well, at least it seems like our protagonists will get some help by Frau (finally, can’t wait to see her actually appear in the anime now) to solve this issue, but I still can’t imagine how or why anyone would wanna play with something like that with such incomprehensible and nonsensical controls.

This entry was posted on October 21, 2012, 3:02 PM and is filed under Anime, Robotics;Notes. You can follow any responses to this entry through RSS 2.0. You can leave a response, or trackback from your own site.