A shy, nervous or timid schoolgirl isn’t anything new nor is it anything exceptional to anime.  In fact, this character archetype is a staple of many anime franchises, almost always included in harem settings or used in combination with another personality type to fit in with virtually every other anime.  And despite the frequency of such characters in anime, the shy elements of the character are often poorly written, exceedingly simplified, or completely mismanaged to the point where it’s detrimental to the character and potentially the story.  Junna Daitoku, however, is a character that understands ‘shy’.  And unlike most shy characters, Junna has already shown growth and progress in her personality as an attempt to overcome this trait and improve as a person.  Junna’s character is just one example that demonstrates how Robotics;Notes has a tremendous grasp on its characterizations.

Junna is a shy character; she’s always nervous around strangers, often getting anxious or flustered over the slightest nuances or details.  She’s reclusive in that she doesn’t venture out and socialize with others, even though she says wants to.  Junna lacks confidence in herself, afraid to showcase her talents in karate, her beloved sport, simply because she failed to advance at the local tournament.  In essence, Junna highlights all the stereotypical attributes that a typical ‘shy character’ in anime would possess.  However, Junna has shown that she is much more than these basic qualities.

What separates Junna from many shy characters is that she has additional characteristics built into her stereotypical shy ones.  For example, the fact that she’s timid around others is only true until she warms up to them.  We’ve seen her socialize with friends at school, plus she was able to spend the whole day acting normal with Kai without constantly bringing up how scared or shy she is like what often happens with this personality archetype.  Another case that shows she’s more than just shy is that she wants to branch out and make new friendships, making connections with Aki and others, though she is uncertain of how to start.  Kai’s help, letting her know that Aki wants to be friends with her, too, and for her to visit the Robotics Club might be enough for her to overcome this shy nature and for her to accomplish one of her goals, a challenge against her predetermined archetype.  Not only that but, at times, her shy personality seems secondary to other elements of her character, such as that she loves karate, dislikes robots and is deep into the urban legends, though she’s scared of the occult or supernatural.  It’s here where we see a potential for growth in Junna’s character, though we’ve already seen some with her warming up to Kai and wanting to befriend Aki.

These additional elements to Junna’s character, ones that are linked to her shy personality but show her complexity, exemplify the strength of the characterizations in Robotics;Notes.  Robotics;Notes wants a cast that’s both productive and dazzling, one that will make this anime both fully developed and memorable once it is all over.  In order to do that, the characters that comprise the cast need to have something about them that make them exciting and enticing, that makes us want to care about them.  How to do this begins with establishing the characters as they were and showing them change through the story.  Although we’re still in the infancy of the series, having just completed everyone’s introductions, we’re already witnessing the characters evolve on their own with Junna as the example from this post.  Others like Kai, Subaru, and even Frau are beginning to become different and better people through these first five episodes, and as they come together as a circle of friends, they are certain to continue in this trend if not at an ever quicker rate.  With that in mind, it will be interesting to see how the characters end up at the finale of this series, especially since we can expect solid growth in their characters from start to finish.  And though this post focused on Junna and how Robotics;Notes differentiates her from other shy characters, this is true of any of the main characters in Robotics;Notes thus far, though some have more evidence than others.  Regardless of who it is, Robotics;Notes shows that it has a fundamental understanding of proper characterization which is a significant positive for this anime. 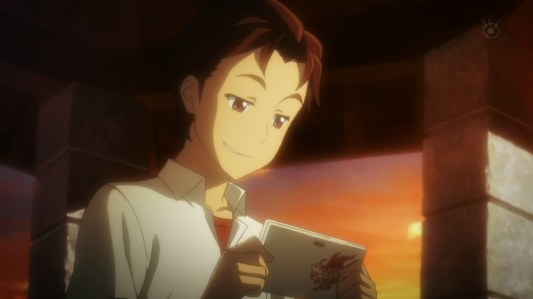 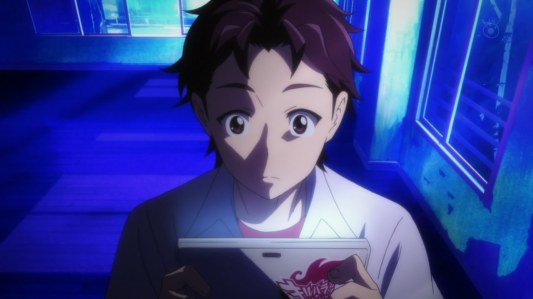 Now that we know that Airi has been spying on Kai for years, you can’t help but wonder how she may’ve evolved after following him for so long.  For one, she seems rather engaged with our young protagonist, wanting to call him “onii-chan” and conversing with him to show how good she is at talking.  Not only that but she was willingly leaking secret passwords and access to files once she finally connected with Kai.  You wonder if she was always programmed to act like this or if years of watching Kai have made her softer or more human.  I suppose if there ever is a reset of her character or other AI developed later that we may find out how she has changed over the years, but for now, and in terms of her own characterization, we can set this cheerful personality as her baseline.

This entry was posted on November 11, 2012, 11:20 PM and is filed under Anime, Robotics;Notes. You can follow any responses to this entry through RSS 2.0. You can leave a response, or trackback from your own site.