Have you noticed it yet?  There’s something unusual about Gunvarrel and its extensive, beloved anime.  Not only that, but there are robots everywhere in Japan, whether they’re the traditional and conventional hobby robots or the titanic, imposing and still incomplete GunPro-1.  And now Junna, too, is influenced by this escalating robotic endemic, going from a sweet, young girl who naturally feared robots to one watching and enjoying a mecha anime.  Yes, the craze and obsession over robots and the immense and immeasurable popularity of a mecha anime is quite peculiar and leads me to believe…

…that Robotics;Notes is somehow a tribute to robot animes of the 1980s. 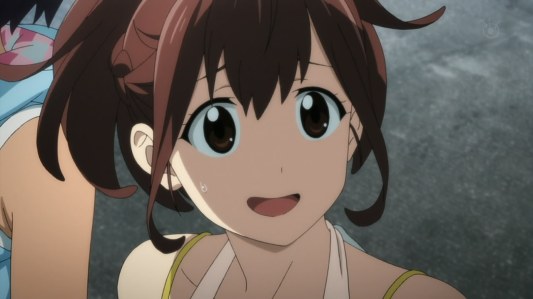 Yes, the 1980s, the pinnacle of mecha anime; not only in Japan but overseas and throughout the world, robots reigned supreme.  Whether it was Gundam, Macross, Gunbuster, Robotech, Transformers, or whatever, it was an era of animation dedicated to robots.  The setting of Robotics;Notes reflects this golden decade with its robust enthusiasm toward all things robots, be it in the form of actual robots or in the robot anime itself.  In fact, you might even consider the fighting tournaments that the hobby robots participate in the equivalent to friends fighting each other with their action figures or other expensive merchandise.  Not only that but pairing this theme with other science fiction ones like space, artificial intelligence, and secret organizations and it becomes clearer that Gunvarrel is a homage to the mecha anime of the 80s and the setting of Robotics;Notes is an appreciation of the Japan of the 80s.

With this theme established, this tribute now grasped, what does it say about Robotics;Notes as a whole?  Obviously the anime is not set out to be merely a 22-episode tribute to the semi-forgotten era of robot anime nor is it a critique on our current society and our obsessive nature as fans but that Robotics;Notes is much, much more.  It shows the concurrent dreams and struggles over a special group of teenagers mixed and muddled with the robotics themes and the scientific mystery underlying it all.  It doesn’t necessarily need the theme of robots for its story to be narrated to us; the anime could be about a world where everyone is obsessed with tsunderes, nekomimi or shimapan.  But no, thankfully, it isn’t.  The robots are a motif for Robotics;Notes, used as a method to explain its story and its characters while also serving as the tribute to the era of anime that many of these animators, producers, and fans still, grew up in.  That’s just part of Robotics;Notes but it ultimately goes much further and much deeper with its intended messages, morals, and themes.  That is to say that Robotics;Notes is much more than just robots and potentially notes (has yet to be determined).  However, what it does mean is that the themes incorporated by a cherished mecha anime and its bubbling mania serves as a pleasant homage to the mecha anime of the 1980s through Robotics;Notes.

Whenever Kai uses his PokeCom to see or communicate with Airi, it appears he doesn’t do anything special.  And as we’ve learned recently, Airi communicated with Aki’s older sister, Misaki, on a regular basis.  From this information, it seems that Airi is rather easy to find if one is actively searching for her with their PokeCom.  And if that’s true, then why haven’t more people found Airi and conversed with her?  According to Junna, the trace signs of Airi are an urban legend, attributed to a ghost or something atop the hill where she unintentionally scrambles nearby electronic devices.  It wouldn’t surprise me to learn that others have met with Airi before Kai has, though I don’t know to what degree they would get to know each other.  Furthermore, I’m surprised that Junna hasn’t continued searching for this urban legend, too, considering how knowledgeable and interested she was in it.  Well, enough for now since I suppose Airi will be formally introduced to the cast sometime soon.  Maybe then we’ll learn if Airi has a relationship that has developed off-screen with someone else… or maybe that this is nothing more than fanciful speculation.

This entry was posted on November 27, 2012, 12:42 AM and is filed under Anime, Robotics;Notes. You can follow any responses to this entry through RSS 2.0. You can leave a response, or trackback from your own site.