As I’ve made an emphasis about the anime community throughout these Twelve Days posts, I figure it’s about time for one of the greatest, most memorable and wholly entertaining events of the year: The Second Anime Blog Tournament or Aniblog Tourney.  With the first one occurring in 2010, before I discovered and read anime blogs, this was the first such event where a majority of the aniblogger community gathered together to share and explore bits and pieces of the community that may have gone unnoticed previously.  Seizing the opportunity, this blog was accepted into the tournament.  However, the act of putting my blog in the Aniblog Tourney is not the reason for it making the Twelve Days list.  Rather, it was the social aspects of the Aniblog Tourney which were the most influential and enduring.

Perhaps the most significant aspect of the Aniblog Tourney is how it opened the entire Anime blogging community to me, exposing me to a diverse variety of types and styles and focuses and niches that I never knew existed before.  I made an effort to visit every blog entered in the tournament and to read at least 1 post (a real post, not the intro say hi, welcome, check things out sorta posts).  As a result, I found myself bookmarking quite a few blogs and nearly tripling the amount of blogs I followed before (~20 to ~60).  Not only that but I began to eventually connect with these bloggers via Twitter and this fostered the beginning of a number of friendships.  As a result of the tournament, I’ve begun to feel more a part of the community online than I ever did before. 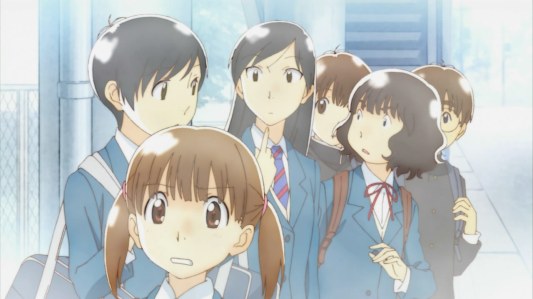 Another impactful characteristic of the tournament was campaigning for my favorite blogs throughout the tournament.  I have many fond memories of trying my best to promote several blogs including chaostangent, The Untold Story of Altair and Vega, and Lemmas and Submodalities.  Although most of these voting campaigns fell short, it was amusing to see people respond, often joining in themselves to promote these blogs or otherwise showing their support in one way or another.  Yes, what probably will be remembered the most about the voting were the unethical aspects of it, largely the drama and cheating and having to wait for the new polling system, but I will remember doing my best to have people support my favorites, and new favorites, throughout the tournament.

In regards to my blog, one absolutely unforgettable aspect was the coordinated posts and podcast I was able to participate in thanks to some clever organization by our group, Group Five of the Red Bracket, which is probably the one singular event I’ll cherish the most.  I’m not sure entirely of how the whole podcast was received by others aside from the lengthy and amusing comments section on Metanorn, but I had a wonderful experience conversing with other bloggers about the tournament and anime in general.  And although my blog saw an early but admirable defeat in that round, losing against the eventual winner in Metanorn and the beloved Baka-Raptor, and sharing the same fate as Ambivalence , or is it ambiguity?, I found that my position in the group to be more worthwhile than advancing further in the tournament.  Don’t get me wrong, I would’ve loved to see my blog continue in the tournament, but to have this experience in my final stage is something I want to appreciate.  Sure, the loss did leave a bit of a sting, but the whole experience in Group Five made it all worthwhile.

Unfortunately for the tournament as a whole, there was quite a bit of drama among the bloggers and an immense amount of stress placed on the organizers.  In the end, I found the tournament to be a huge success, especially when considering the lasting influences of the tournament and how it truly opened myself up to the blogging community as a whole rather than fragmented pieces that I found across the internet.  I hope that everyone involved took a moment to thank Scamp from The Cart Driver for what he and the other organizers (couldn’t find a list, sorry to everyone else who worked on the tournament) were able to do for the community with this tournament and thank them for the time and effort they put into running this event.  Even to this day, I believe the Tournament played an invaluable and irreversible role for me and my blog and I hope everyone had a positive experience from it, maybe not to the same degree as I did, but to a significant extent.

This entry was posted on December 23, 2012, 11:59 PM and is filed under 12 Days of Anime, Anime, Me + Other Non-Anime Posts. You can follow any responses to this entry through RSS 2.0. You can leave a response, or trackback from your own site.