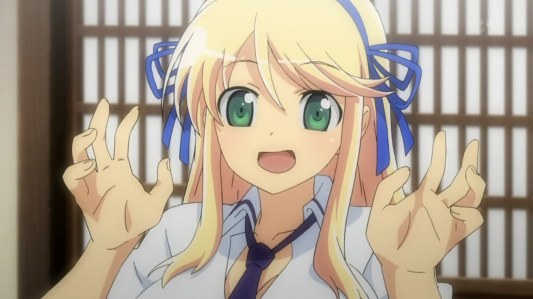 The giant, bouncy boobs might be the most unforgettable or discussed subject about Maoyuu Maou Yuusha, but there’s quite a bit going for it that seems to indicate that it will be a rather intriguing and remarkable anime.  For starters, the JRPG-esque fantasy setting is already captivating, showing a rather standard set-up with heroes against demons in a world abundant with swords and overflowing with magic.  However, while it may seem like the anime is set with a strong video game-ish theme, all the characters seem to act and think like genuine adults.  Furthermore, the perspective on this setting is rather thoughtful with the two sides weighing the risks and benefits of waging total war with the other side.  With this as the set-up for the plot, one examining the economic, social and political impact of war, I am already thoroughly interested and already engaged.  The only one who seems video game-ish or anime-ish is the main character, Yuusha (or Hero) who is constantly flustered over the thought over girls and breasts.  Really now?  You’ve been slaying demons, families have been slaughtered, the countryside is ravaged and pillaged and boobs are what’s giving you fits?  If only he, like everyone else, acted like a mature adult, then I really wouldn’t have any complaints over this anime but he is, without a doubt, the biggest boob in this anime.  The rest of the cast, so far really just Maou (or Demon Queen), has been great, especially considering how she discusses her thoughts and ideas through discourse and open-dialogue rather than barking commands or arguing like a preschooler.  The character designs are pleasant and mesmerizing and the backgrounds are stylized to resemble heavy, thick oil paintings, so I am really enjoying the artistic and visuals of this anime.  The only part I don’t care for is in regards to the boobs bouncing and flopping every which way.  Here it just seems out of place with it wanting to be serious and academic.  Yeah, I guess it wants to play around, too, and have some fun and lightheartedness to it, but it could do better than giant breasts and jokes about giant breasts.  I don’t really mind that it’s there but I just wish the anime would tone down on that a bit.  That and Yuusha acting like a standard anime protagonist, fighting for his ideals but scared of boobies, are really my only two complaints for this anime.  Everything else has been both fantastic and fascinating, and I’m pleased to follow this anime for this Winter anime season. 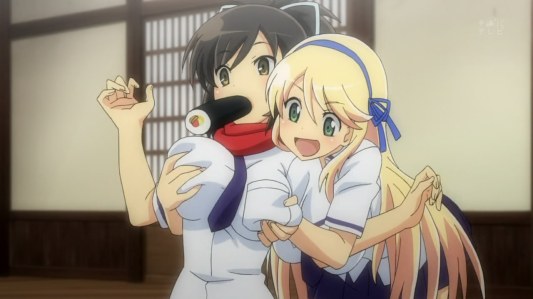 The giant, bouncy boobs might be the most unforgettable or discussed subject about Senran Kagura, but there’s quite a bit going for it that seems to indicate that it will be a rather amusing and likable anime.  Considering how much of an emphasis and dependence this anime has on fanservice, it’s apparent that this anime doesn’t take itself seriously nor does it want to.  Instead, it wants to have fun and wants the audience to have fun with it.  That’s the reason why the characters are so shallow and stereotypical.  That’s why the plot is so basic with ‘ninjas fighting ninjas’ with transformation sequences and superpowers.  No one’s watching this for the story or the characters (well, maybe for their looks and fanservice); the only reason to watch this anime is to be entertained.  However, in terms of entertainment, this first episode was merely adequate although entirely acceptable.  Two areas where it needs to improve are in its comedy and in its action.  Senran Kagura isn’t nearly as humorous or mindless as the promotional videos presented, and the comedy was rather dry and limited to fanservice, such as Katsuragi fondling Asuka’s boobs over and over again. It still managed to be amusing at times but was a bit disappointing in how it relied too heavily on boobs and Asuka being stupid and oblivious to everything.  The battles weren’t that great either, with the first one being way too dark to properly appreciate and the second one too short to enjoy.  Both did show some promise, so maybe we just have to wait until the ninjas begin battling each other.  That being said, the character designs are rather cute and silly with, again, an emphatic emphasis on fanservice and the battle animations were amazing in terms of quality and kinetics.  There were some scenes where the quality regressed to something substandard, something you almost never see in the first episode of an anime, but for an overall grade, the art and animation pass.  The music is a particular surprise being both delightful and appropriate, especially with how it set the mood for certain scenes.  The first episode of Senran Kagura proved that it still has some areas to improve upon, such as the comedy and fighting, but for the most part was fun and entertaining and is a worthwhile anime to watch for the next few months.

Nothing here, at least for now.  That means the other two anime are…

The more I think about it, the more it seems appropriate to place this anime here, at least for now.  Bakumatsu Gijinden Roman is an anime with several positive aspects and some potential, but the first episode lacked that necessary charm to hook me and failed to generate enough interest in the characters or story for me to want to continue.  What appears to be a poor man’s Lupin III, Bakumatsu Gijinden Roman is an anime about a luckless, gambling loser who doubles as an unrecognized heroic Robin Hood character.  Set in the transformative Meiji period, Roman’s life is divided around helping others who need help by day and raiding the coffers of the magistrate or governors by night and redistributing the wealth back to the citizens of his impoverished town.  The potential exists for quite a riveting or remarkable story to be told but all was lost when Roman transformed into a superhero of sorts and destroyed the golden palace at the end.  Like, mixing in that strange fantasy bit really damaged the premise for me since I figured Roman was just a pretty normal guy who wanted to help the helpless with his creativity and ninja-like abilities.  Nope.  Not only that, but it also seemed to damn his character, too, removing that likable charm that was being carefully constructed throughout by showing him as a gentle soul who served as an unappreciated inspiration to the townsfolk.  Yeah, really, that scene at the end where he transforms and blows up the building really did not fit in with the rest of the anime and seemingly reserved my impression of it.  It really doesn’t seems special anymore with Roman able to do that… like he’s cheating almost or that the writers were lazy and decided the final fight needed to last only 20 seconds.  Dang.  Well, to be fair, the rest of the episode was pretty underwhelming and the remainder of the cast was rather boring.  The art and animation are solid and the retro-style of the character design is nice but it resembles Lupin way too much to feel original or anything.  So while I consider it to be dropped for now, I might take a peak and see what the second episode is like, just to see how it improves and if it goes back to that Sentai Warrior transformation again.  However, even if it does fix those blemishes, I’m not entirely certain that it will be enough for me to pick it up again, so it’s here for now and probably for good.

Oh, where to start with this one?  Amnesia is an anime that suffers from numerous basic and fundamental issues that I want to believe this anime is not only named after the character’s sudden case of amnesia but that the entire staff behind this anime has amnesia, too, and is trying to figure out how to make a somewhat decent anime.  It seems the animators were unfazed by this bout of forgetfulness since the visuals and animation in this anime are crisp and superb, easily making the aesthetics the best aspect of this anime.  The rest is not pretty.  First, every character that was introduced in this episode is remarkably bland and emotionless, almost like reactions and feelings are foreign, incomprehensible ideas to them.  Every character had a blank face which apparently fit well with how everyone spoke with a monotone voice.  The reactions were bizarrely terrible, such as during that scene when Shin and Towa tried to take Heroine to the hospital (and what’s the deal with Shin wearing two collars on his neck??).  You’re figure there’d be some urgency and emotion in a character who just lost her memories or some confusion from the characters who are talking to her, but everything is set to be as banal and boring as possible.  The story isn’t much better seeing as it is a candidate for the most boring mystery ever.  Not even the characters are enthusiastic about figuring out the Heroine’s life, so why should I be?  What might be the worst aspect about it is that everything that could be used to help the Heroine is conveniently erased, like her cell phone data, so that way she has to learn it through interacting with these mysterious guys.  Gee, that sounds fun and safe.  There’s just no way of making this story fun or interesting or engaging or even somewhat enjoyable.  And saying that this anime is boring would be a massive understatement.  There really isn’t anything going for Amnesia besides all these crucial problems.  The one good thing I have to say about Amnesia?  In my humble opinion, I believe that Amnesia could be marketed as an effective sleep aid for people suffering from insomnia.  I really do.  That and I actually like their Hypno-Toad eye effects going on, too.

So yeah, I’ll be watching both of the shows with giant, bouncing boobs in them and the shows that aren’t are being immediately dropped.  Kinda funny to think about it that way, but honestly, they’re both significantly better than the two lesser anime evaluated in this post.  However, this pattern is certain to change as new shows are continuing to air this week and I am looking forward to plenty of the other, non-fanservice anime debuting soon.  It appears that there will be only one more First Week Impressions post following this one since this is a lighter season and that I’m only interested in a few more of the new anime.  Until then!

This entry was posted on January 9, 2013, 12:58 PM and is filed under 2013 Winter, Anime, First Impressions. You can follow any responses to this entry through RSS 2.0. You can leave a response, or trackback from your own site.