The purpose of the seventeenth episode of Robotics;Notes was to show Aki regain her fortitude, determination and perseverance; for her to recognize her dreams of completing a giant replica of Gunvarrel in the wake of the disbandment of the Tanegashima High School Robotics Club and when facing the orders to dismantle and scrape GunPro-2.  But you have to really question, how was this challenge or a problem for Aki?  How and why was this viewed as an obstacle for her to overcome? 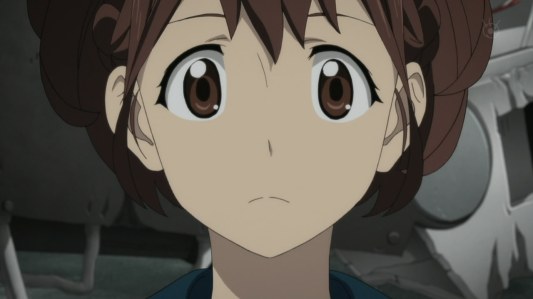 I am really confused about the progression of this episode, going from the meeting with the vice-principal where the Robotics Club was effectively disbanded to Aki restating her declaration of completing GunPro-2 on the old, abandoned runway.  But… why?  How was this a challenge to her character?  I can understand the school ending its sanction of the Robotics Club but is that all that’s needed to stop Aki and others from completing their dreams?  Sure, disbanding the club means cutting its funding, taking away the club’s room and cutting access the club has to other resources like faculty and other school connections.  But wait, they already had the robot constructed.  And with JAXA and Space Candy, too.  It’s not like the school owned GunPro-2 or even the hangar it was constructed in.  Just how much power does this school have over the robot?  How was it able to order it being dismantled when it had virtually zero input into it?  Why not have Aki just say, ‘yeah, you can break up our club here at school, but we’ll just keep on making the robot outside of school!’  Not only that but the kids will be graduating soon and be done with the school and the club regardless of these events.  So how and why was this viewed as a challenge for Aki’s character?

Honestly, I don’t know.  I really don’t know.  Yeah, I can understand why the school is shutting down the club and why they want the robot dismantled but it’s not like the school has the power to do any of that.  And considering the personality of Aki and the others in the room, it makes no sense for to sit there and take their orders like that.  It’s as if everyone in that room removed their spine before entering.  Either that or their normal personalities.  Whatever the reason, it just felt rushed and awkward, like the writers were forcing this on us trying to make us believe it was dramatic and imposing when it really wasn’t.  You knew Aki would find a way to worm around the issue and begin working on GunPro-2 again.  You knew it wouldn’t end there with the vice-principal telling them it was.  Nah, I think this was just a failed attempt and forcing some melodrama on the audience to make us feel sad for Aki.  And really, I’m not sure what I’d want from that scene to make it better.  Honestly, I don’t think it was necessary at all and that a majority of this episode, at least that revolving around Aki, was superfluous.  Really, was an episode like this necessary right when we’re reaching the climax of the series?  I just hope the Robotics half of the anime closes out soon and the remainder of the series, from episodes 18 to 22, is all focused on the Notes storyline. 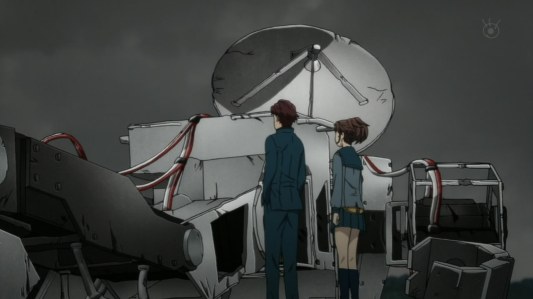 I love how dark and stormy and overcast and gloomy the entire episode was up until the sun broke out from behind the clouds right exactly when Aki realized her strength and resilience.  I know it’s kinda lame and overused but it helps reinforce the themes and the message going on by playing around with the environment.  Having the weather be really crappy the whole time matches the moods that the characters are feeling.  Even if you don’t see it on their faces, you can tell they all feel really bad.  And then when Aki returns to her normal, bright, energetic self, the sun begins to shine, warm up everything and light up the world.  Even GunPro-2 looks better, too, having all those cracks and dints in its satellite dish (from the fall? How?) disappear in just one scene.  Yeah, it’s a visual metaphor illustrated through the setting to strengthen the atmosphere and emotion of the characters and I love it.  Yeah, it wasn’t the least bit subtle but it was effective and that’s what matters when playing around with the environment like that.  Yeah, that was pretty damn great, I think.

This entry was posted on February 17, 2013, 10:24 PM and is filed under Anime, Robotics;Notes. You can follow any responses to this entry through RSS 2.0. You can leave a response, or trackback from your own site.