Anime trending down this week: To Aru Kagaku no Railgun S

The little bit that Yasaburou added, how each son embodied a distinctive and characteristic attribute of their deceased father, was really a pleasant and impactful addition to conclude the episode.  Not only did it further explain how each child is connected to their father personally but also how he continues to live on through his four sons.  However, when comparing the four sons to their father, you can’t help but wonder if this is another example of ‘the whole is more than the sum of its parts’.  That is to say, the father was able to do more and accomplish more with these four attributes together than the four sons can do individually.  Not to say that because of his status as the leader of the entire tanuki community of Kyoto did he accomplish more but that as a person, a father and a character, he seemed more complete.  Perhaps it’s because he was able to keep these four attributes in perfect harmony within himself rather than being subjected to criticism and conflict like what we see with the brothers.  Well, whatever the reason, Yasaburou’s astute observation was a wonderful way to surmise the importance of his father’s legacy on himself and his brothers.

There’s such a thing as loli and then there’s such a thing as too loli.  And this is too loli.  I had always considered the main quartet of characters in Railgun to each be young girl on their own or in their groupings, maybe borderline loli depending on the definition or usage of the term.  But now with Febri on board, I can’t help but think of these girls as young adults, acting all grown-up and responsible when taking care of this little, lost child.  And no, I don’t get this impression from what they’re doing but merely from how they look in comparison to Febri.  That is to say, Febri is so loli, she makes other lolis look like young adults.  And when you get to be that loli, that’s too loli.

Poor Sayomi.  Her character is frequently chastised and avoided by the main cast of Tamayura due to her eccentric behavior, reckless driving skills and her infamous hikes and adventures that are more tiring and time-consuming than writing for an anime blog.  But all Sayomi does or want to do is to share experience with her sister and her friends all the wonderful sights, sounds and smells that she’s discovered in her life.  It’s not her fault that these hikes and explorations are grueling excursions through forests and up mountains, but she’s confident the experience is worthwhile and that it’ll have a meaningful impact on anyone who finishes the trip.  It’s not like she enjoys tormenting these girls; everything she does is in good faith.  She knows that everyone will cherish the experience and be thankful that Sayomi guided them there.  But how is she repaid for all this?  Not very well.  Not very well at all.  It’s kinda sad to see this level of conflict between the two sisters in Tamayura, though you always know whatever resistance Kaoru puts up is met with submission and followed by reluctance.  Maybe Kaoru and the others should be fortunate that Sayomi spends this much time and energy on trying to impress them with sights and experiences that they would never otherwise partake in.  Now if only she were able to spend that much time and energy on learning how to be a better driver… 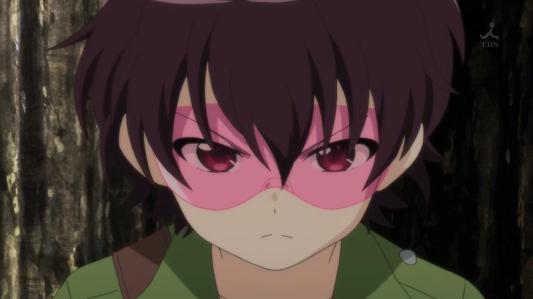 So what is C3-bu all about?  Is it about the C3 club and their participation in airsoft tournaments and survival games?  Is it about Yura’s phantasmal fantasies that have seemingly dropped off in recent episodes?  Or is it about Yura’s flaws as a character and questioning whether she’s happier when she’s winning, praised and revered or if she’s happier being another seat at the table of friendship.  Well, to be honest, it’s probably a healthy dose of all three blended nicely together, but the recent focus on Yura’s flaws, ones that really question and challenge her character, have been exceptional for this anime and Yura as a protagonist.  Seeing these imperfects and blemishes in her character and seeing them manifest in conflict has really highlighted the drama in this anime by showcasing the conflict going on in Yura’s mind.  She wants to win.  She wants to be praised.  But she also wants to have friends, to be happy and to smile again.  And unfortunately for her, she lacks the perception to understand what she really wants and the clairvoyance to understand how to get it.  Really, seeing the deterioration of Yura’s character and her unfortunate true nature have made C3-bu a joy to watch.  I can only hope to see this continue and for there to be a resolution to this storyline since it really has become the anime, more than the airsoft and delusions combined.

What’s new and spectacular for Hachiken is same old, same old for everyone else.  It’s rather amusing to see what riles up and excites Hachiken is pretty much an everyday activity or occurrence for others.  But then again, that’s expected.  Since Hachiken is from an urban setting and has never really experienced a rural or agricultural environment, all these sights must be really exciting for him.  And for a majority of the audience who has never had the chance to experience such events, the reactions must be parallels of each other through to a much lower degree (I can only hope).  It works for the anime considering that our perspective is from Hachiken’s point-of-view, but it’s just humorous to see how he’s the only one who really reacts to everything.  Then again, I’m sure the opposite would be true if you took these other students to Tokyo or some other metropolis and showed them all the neat things there, like delivery pizza in less than 30 minutes.

The Monogatari series is pretty much a string of conversations between two characters, dialogue that composed in such a way to match two personalities together with a variety of topics and events that comes to tell a story while also being entertaining and thought provoking.  To me, the best pair in terms of comedy has to be Araragi with Shinobu.  When those two are together, when those two personalities are paired, the writing seems to excel in terms of comedy.  While other pairings match better in terms of philosophy or romance or are comprised entirely of wanton sexualization (*cough* *cough* Kanbaru), every pairing has at least some shades of comedy in it, though the styles vary depending on the situation.  Nevertheless, Araragi and Shinobu always seem to be the most entertaining and comically satisfying as compared to all the rest.  That’s not to say that the others aren’t funny as I am particular to Senjougahara, Karen and Tsukihi, but that I find myself smiling the most and laughing the most when it’s just Koyomi and that blonde vampire.  That being said, I can only hope that we see more of Araragi and Shinobu together once this story arc is concluded. 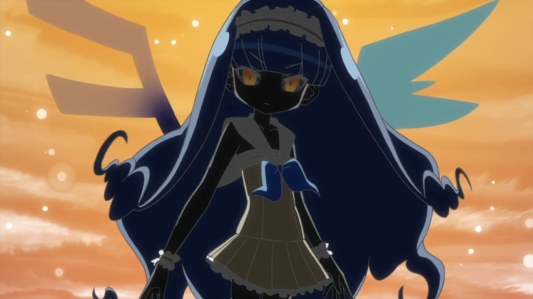 It takes guts to kill a character.  And it takes even more guts to kill a pleasant, cheerful character that many people liked or enjoyed.  But it almost feels disgraceful or shameful for Genei Taiyou to kill off Ginka like that.  It almost felt as though the series was killing her off for the sake of killing her off, rather than for anything meaningful or significant to the series.  It’s like they did it because they wanted to do it, not because it fit into the story or was necessary for the story or the characters to continue.  It’s as if they realized it would be cool or awesome or it was going to make the anime better or more dramatic if its cast was murdered towards the end of the series.  And maybe it is, but I can’t help but wish that this death was done justice.  That it was done better.  That it actually carried some weight and significance beyond watching a cute girl die some horrible death.  I do understand that these deaths may play a more significant role later on the series and more on Akari’s character, but I can’t help but criticize the way it was handled in Genei Taiyou and that’s the main issue I have here with this episode.  I can only hope the series quickly learns from this lesson before Luna and Seira face the same terrifying fate.

Have you ever wondered what the Gatchaman would be like without Hajime?  Just how backwards or bad their little organization would be without her thinking and fixing and making everything better?  Hell, they’d probably still be messing around with MESS and have no clue about what to do with Katz.  Didn’t it take like one or two episodes for Hajime to fix the MESS mess and have the story jump over to the whole Crowds/Rui/Katz issue?  And even now, she’s pushing the story through at blazing speeds, never wasting a moment for the story to take the next step, then the next one until it’s at a full-on sprint.  And what does this say about her compatriots at the little, secret Gatchaman hideout?  I think it says that they’re just bad or lazy or stupid.  Or at least, that’s what it says to me.

This entry was posted on September 15, 2013, 10:27 PM and is filed under 2013 Summer, Anime. You can follow any responses to this entry through RSS 2.0. You can leave a response, or trackback from your own site.