Anime trending up this week: Danganronpa

Anime trending down this week: Genei wo Kakeru Taiyou

Throughout Uchouten Kazoku, from the start until now, we’ve taken a magnifying glass to the deficiencies of each of the brothers. The eldest, Yaichirou, is the most responsible but crackles easily under the slightest hint of pressure; Yajirou has lost his ability to transform and resides as a frog living in the bottom of a well; Yashirou is timid and incapable and unable to do much in the way of anything useful, even having trouble keeping his tail hidden when transformed as a human; and lastly is our protagonist, Yasaburou whole had idiocy running through his veins.  But, with the twelfth episode of Uchouten Kazoku, we’ve seen these characters overcome their faults and flaws.  Yaichirou is running for Nise-emon, a position which demands composure through constant stress, Yajirou has left his depression in the well, along with his inability to transform, Yashirou has proven indispensable and displayed foresight in rescuing his family and Yasaburou, while still the idiot, is doing what he can to restore peace and order to his family and tanuki society.  All that remains now is one episode for the family to each do their part to finally restore their family honor and place in tanuki society.  Given what we saw of them at the beginning of this series, you wouldn’t have even given them a chance… but now?  Well, let’s just see how things play out, shall we? 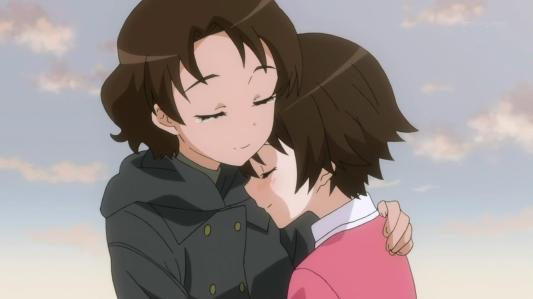 My my, how an anime series can change over 12 simple episodes.  When Tamayura ~hitotose~ ended back in 2011, I found the series to be mild and lackluster, partially to blame on the characters, the writing and the plain art style among other factors.  After finishing the first TV series of Tamayura, I thought I was done with the series.  With Tamayura ~more aggressive~, I thought the series deserved an episode, just to see how the series was.  And after one episode… I noticed the series had changed significantly.  Rather than episodes feeling empty, there was a sense of genuine emotion and growth to the series.  There were actually meaningful development happening to the characters.  And the addition of new cast members helped change the dynamic and focus of the series while also forcing some of the weaker, less desirable characters (*cough* *cough* Kou and Komachi) into the background.  And as the anime developed, the stories and dialogue began to felt more thoughtful or reflective.  The series had improved and to a significant degree, too.  And after 12 episodes, I have to admit that Tamayura ~more aggressive~ has been one of the most enjoyable anime of the year.  The series still has a number of flaws to address but it corrected enough for the series to be a success compared to the first TV anime.  It just goes to show how much can change after 12 episodes of an anime… and how much can change after giving a series another chance. 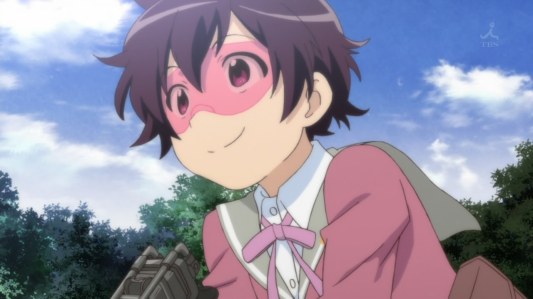 Although having fun has always been a theme in C3-bu, the series was never really fun to watch.  Sure, some episodes were more enjoyable or entertaining than others, but the focus of the series was almost always serious, bouncing around from Yura seeking acceptance to Yura having crazy delusions to Yura being obsessive over airsoft and then finally, Yura being lost.  Fortunately, with Yura finding acceptance again, the series was able to enjoy itself with amusement, silliness and, above all, fun.  Not only was the theme of the entire episode devoted to having fun with all her friends but the animation, storytelling and characters were able to partake in the fun, too.  The animation featured numerous shots of cute chibi characters, childish expressions and cartoony motions to give the visual element of the episode some fun.  The writing of this episode, particularly in the way of the dialogue and episode development, also showcased its fun by completely ignoring Yura’s obsessive behavior and forgetting all the trouble and conflict experienced in previous episodes.  And the characters were always laughing, smiling or having a good time, a stark contrast to what we’ve seen as soon as one episode ago.  And it could not have come at a more perfect time too, with the climax of the series being in episode 11 and C3-bu in need of a reward for its characters and its audience.  This episode was, undeniably, an incredible and extraordinary way to cap Yura’s story, documenting all her struggles and triumphs, and ending it with this troubled, lonely girl smiling among friends. 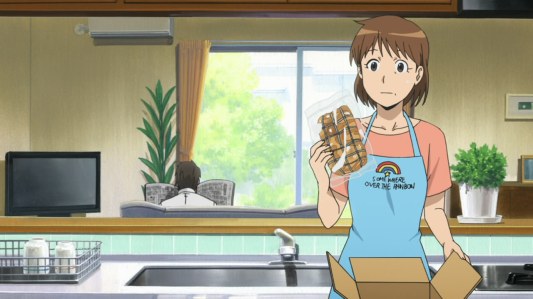 The story of Silver Spoon begins with Yugo leaving home, or more appropriately, leaving his parents.  And throughout the series, Yugo wasn’t afraid to let us know that his parents were the reason for his independence, often displaying signs of anger or annoyance at the slightest mention of their existence.  And the same could be said for Shingo too, Yugo’s older brother, who also left home to explore what interests him.  And although he doesn’t lose his temper when thinking about his parents, you can tell there’s a certain level of frustration in his voice.  So why this irritation?  Why this disconnect?  What is it about their parents, particularly their father, that caused the two brothers to hate them so?  It’s really a topic that has defined the series but has yet to be explored or even addressed thus far.  After 11 episodes, you figured there’d be something about the parents that revealed them to be evil corporation leaders or aliens destroying the earth or something.  But no, we just got a stereotypical anime dad reading a paper and disappointed about bacon or something.  Seriously, that’s it.  And given the material we’ve seen thus far, the mother doesn’t seem all that bad, especially after trying to get a hold of Yugo who wouldn’t return her calls.  I really had hoped that there’d be some development in regards to the parents sometime this series, but really… we were given nothing to work with.  So what is it about their parents that caused Yugo to run away from home?  I suppose we’ll have to wait until the second season which will begin in Winter 2014.  Until then, all we have is a few choice scenes and our speculation… which, when combined with dissatisfaction and disappointment, is a dangerous recipe for an anime. 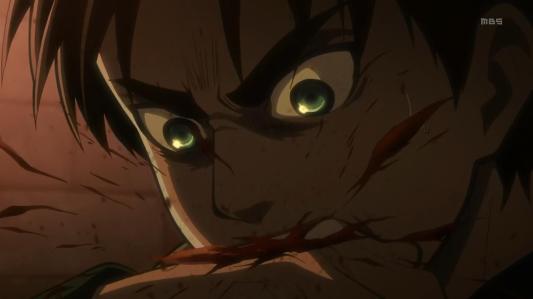 So, who exactly is Eren’s dentist?  Because when taking into account the setting and technology in the anime, I’m curious as to how Eren got his teeth so sharp that he’s able to bit through his hand.  I mean, whenever you look at Eren bite himself in hopes of transforming into a titan, he always draws blood.  And he makes it look effortless, too.  Now go ahead, try biting your own hand.  Give it a few tries.  What happens?  Yeah, no geysers or torrents of blood, gushing out from the meekest of nibbles.  So what does this say about Eren?  His teeth must be like daggers or something.  And considering the lack of modern technology and healthcare, how does Eren maintain his teeth to such a high degree?  Honestly, these mysteries are much more interesting than the origin of the other titans, the walls or this whole silly war, right?  If I were in Attack on Titan, I’d be going crazy over Eren’s teeth, probably to an even greater degree than Zoe over anything titan.

With the Nadeko Medusa arc instigating in this episode, this marks the second story in Monogatari Series where the perspective is told from someone other than Araragi.  Like with Nekomonogatari: Shiro, which followed the story through the eyes of Tsubasa, Nadeko Medusa is narrated by the heroine of the story, with this being Sengoku’s chance to be the main character.  With this change of perspective, Monogatari Series has allowed the anime to expand beyond the space located below his ahoge and venture into the minds of other familiar cast members.  Not only has it rejuvenated the series in terms of this new perspective, but it highlights the differences in their personalities to present various styles to storytelling and interpersonal relationships between other characters.  As a result, we saw a friendship flourish between Tsubasa and Senjougahara.  We also saw Tsubasa earn some introspection through speaking with Episode and Izuko Gaen.  And we saw Tsubasa overcome her struggles on her own though she still needed a little help in the end.  So what this mean for Nadeko?  Will we see the same level of intimacy and development as we saw with Tsubasa?  One can certainly hope so, although we should take into account that Nadeko is much less outgoing than Tsubasa and that her oddity has a different effect on her.  But the opportunity is there for her character to grow exponentially during this Medusa arc.  I certainly hope it follows a similar style to Tsubasa’s character, especially since Nadeko is currently my least favorite character in the Monogatari franchise.

Unfortunately for Genei Taiyou, it suffers from the same disease that makes lots of anime mediocre: it has some interesting ideas but can’t properly execute them.  That is to say, I do enjoy the style, the themes and the ideas behind this anime but I can particularly care for them with unintelligent writing, unimaginative content and clichéd twists.  It’s as if someone explained to the producers what Puella Magi Madoka Magica was about while neglecting to mention the writing, the dialogue and the complexity that made the series so paramount and celebrated.  I don’t mind that Genei Taiyou had so many similar ties in with Madoka but the differences in the storytelling are astronomical.  Whereas Madoka was able to derive genuine emotions from its characters and express it clearly with the audience, Genei Taiyou has characters talking about their emotions.  Always show, don’t tell in anime.  And the resolutions and subsequent character growth felt challenging, earned and rewarded in Madoka.  In Genei Taiyou, it seemed to occur regardless of effort and often felt misplaced or arbitrary, such as Ginka reappearing because why the hell not?  And although it’s largely unfair to compare Genei Taiyou with Madoka, it feels appropriate since the two share similar themes, settings and motifs.  It’s unfortunate that Genei Taiyou doesn’t share what made Madoka outstanding, the execution and performance it was able to achieve with its writing and directing.  Still, that isn’t to say Genei Taiyou wasn’t enjoyable as an anime, just that it could’ve and should’ve been much, much better.

Monokuma unlocked all the doors of Hope’s Peak Academy?  Why doesn’t everyone just leave?

No, but seriously, Danganronpa is shaping up nicely with its final two episodes, a finale that’s due to answer all the mysteries and lingering questions of Danganronpa.  And with all the unexpected twists and shocking revelations in this anime, I find myself enjoying Danganronpa like never before.  After questioning the series and feeling somewhat disappointed, the anime is beginning to deliver what I had hoped for all along with this final Classroom Trial.  And I must say, the synthesis and presentation of all this information is certainly making me happy.  With that said, I’m beginning to appreciate all that’s happened in Danganronpa and I’m beginning to understand why the franchise has been so popular since its release in 2010.  If the series finale answers all my questions and proves to be as entertaining as this episode, I can see this moving up my rankings when the season concludes…

This entry was posted on October 2, 2013, 11:51 PM and is filed under 2013 Summer, Anime. You can follow any responses to this entry through RSS 2.0. You can leave a response, or trackback from your own site.