Considering that we are already two weeks into the anime season, there really is no point in publishing a Season Preview since all of the shows have aired 1-2 episodes by now.  And considering that the previews are mainly geared toward my tastes and preferences, it sorta doubles over here into these First Impressions where I document my opinions based on these first episodes.  So in short, I’m starting the season off with my First Impressions for the first anime that aired this season. 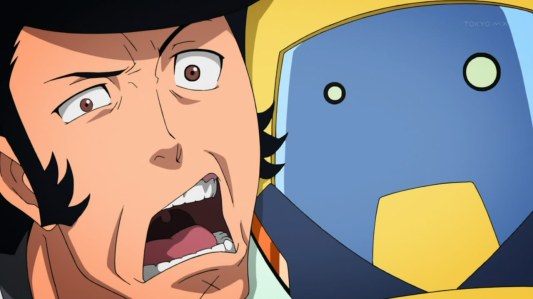 Despite the hype and acclaim for Space Dandy received prior to its release, I had my reservations for a series of this style and caliber.  While I am enthralled with the prospects of watching another anime directed by the distinguished Shinichiro Watanabe (Cowboy Bebop, Samurai Champloo, Sakamichi no Apollon) and am intrigued by the collaboration with international broadcasters (including an English dub airing on Adult Swim), I never felt invested in the story or the characters.  For whatever reason, whenever I saw promotional artwork or PVs, it felt like Space Dandy was too much of a parody or too satirical.  Fortunately, the first episode dispelled these worries with a style unparalleled in anime today.  The style of the show, both in terms of its art, its personality and presentation, is amazing in how it utilizes retro details, like its characters and story, to embellish its charm.  Furthermore, it has updated these retro appeals to interject enough parody into the genre that it feels original rather than a comic mockery of fantasy space exploration.  There is some genuinely humorous comedy too, which is always a plus.  I can’t say I’m thrilled with the story or characters at this point, but those are always details that develop over the course of the series.  That and my original worries about them being too much of a parody were quieted when seeing their relationship and how they go about their adventures together.  One other point is that Space Dandy has a real deep space setting which is an automatic positive for me, especially with how rare space anime are now.  I still have some reservations with the anime but I won’t let that get in the way of enjoying this spectacular anime.  I must say, I am impressed with the series and finally starting to buy into the hype and excitement that I passed over before the season began.

Noragami failed to impress me with its premise, its characters or through its PVs largely due to how generic or derivative it felt.  However, when watching the first episode, I found there to be some value in a series that feels like a cliché.  While unenthusiastic about the story of an impoverished god looking to make it big, I did find myself enjoying the female lead character, Hiyori, particularly her sincere and strange personality and her legitimately comical moments.  Often times, in these types of shounen anime, you see female characters being serious and sensible while the male character plays the fool and generates all the laughs.  It’s refreshing to see Hiyori be the awkward or abnormal one, like jumping out of bed and unexpectedly hissing like a cat or her reactions to her out-of-body experiences or during the fight against the giant, demonic toad.  She really impressed me with her personality and I’m excited to see what happens to her with her outlandish problem of becoming a cat-girl spirit.  The art and animation were never spectacular or magnificent (besides the opening scene) but there’s nothing wrong with being mediocre when it gets the job done and I enjoyed the style and directing.  The mild fanservice was a bit of a surprise but the panty shots were only really noticeable if you were actively searching for them.  I do wonder if my interest in this anime will last for the season, but the anime is off to a good start.  I’ve always liked Bones as a studio and think of them as one of my favorites, so it shouldn’t be shocking to see me picking up both of their anime this season.

Nobunaga the Fool is the first anime of the season that I truly feel conflicted with.  On one hand, I loved the setting of this anime with its fusion of arbitrary historical figures in a fantasy world with distinctive mecha robots.  The style is noteworthy too, with attractive character designs (who doesn’t already love Leonardo da Vinci?) and fluid animation during battles and action sequences.  I must say I’m enjoying those aspects of the anime.  But on the other hand, I was honestly bored throughout the entire episode.  The pacing was insufferably slow, the episode heavy with too much dialogue and the story seems painfully plain and unoriginal.  It’s never a good sign when I stop caring about the characters/story near the beginning and stop paying attention toward the end… but I’m willing to give the anime another episode to see if it can salvage this wreck and produce an entertaining anime worth watching and enjoying.  It’d be a shame if I dropped this anime since the setting and art are two unquestioned strengths but the mundane characters and tepid story might keep this anime grounded if they don’t improve significantly by the end of episode 2. 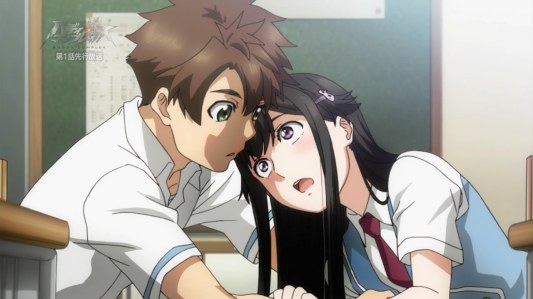 I’d like to start off with saying something good about Buddy Complex but I can’t.  The premise features no creativity or innovation in the mecha genre with a normal Japanese high school boy becoming a heroic mecha pilot because whatever.  Then there’s the lead female who has a secret crush on him and is also a mecha pilot and, though she can’t bring herself to confess her feelings, she’s able to rescue him from generic evil teenage boy and his giant mecha.  Then there’s like a school and a military and a war and probably other mecha pilots.  And if I’m wrong about any of these details, it’s because I only watched the first 8 minutes and fast-forwarded until the end.  There is literally nothing about this anime that makes it worth watching.  The only difference between this anime and all the other mecha anime you’ve watched recently is that those anime were good and this one is bad.

Ugh, what a letdown.  I come into the anime with no expectations whatsoever and was still disappointed.  The anime is about what I figured it’d be with the main character goofing off, the girl overreacting to literally every little thing that happened and shouting about it (note: shouting should never be the punchline of a joke, ever) and then getting caught by the teacher for another non-joke.  But what made it worse was that the “joke” was so drawn out that it consumed the whole first episode.  Why not divide it up and fit in two or three stories, especially since the final scene in this was the definition of anticlimactic.  Thankfully, I only wasted 7 minutes of my time.

Before moving closing this post, I really want to bring to your attention the Witchcraft Works ED.  It’s so adorable (especially how they sing out the word “activity”) that I am actually thought about watching the anime just to see what it’s like.  Then I reread the synopsis.  Yup, still not watching it despite probably being the best ED for Winter 2014.

This entry was posted on January 16, 2014, 11:08 PM and is filed under 2014 Winter, Anime, First Impressions. You can follow any responses to this entry through RSS 2.0. You can leave a response, or trackback from your own site.