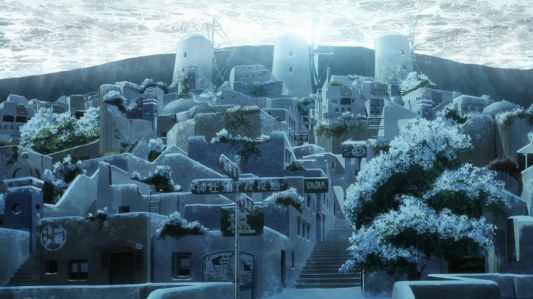 A couple weeks ago: wondering which side to root for in KILL la KILL, examining the biggest problem in Toaru Hikuushi e no Koiuta, curious decisions made about Kumin in Chuunibyou Demo Koi ga Shitai! Ren, and enjoying Hoozuki no Reitetsu for its aesthetics.

Anime trending up this week: Nagi no Asukara

Even though this episode focused on Kumin and her theme, there was relatively little to no character development for Kumin since it focused on the silly napping club instead of giving her character the opportunity to mature.  Most of the time character episodes resolve a problem or reveal a new trait for which the character can evolve, but this episode did nothing for Kumin.  Although it was cute and fun, it’s somewhat of a missed opportunity, especially since Kumin is the least developed of the main characters in Chuunibyou. 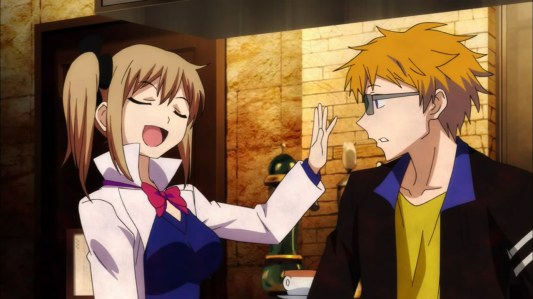 Is it bad that my favorite episode of this series was a comedy/fanservice(?) one unrelated to the main story except for the end?  It probably doesn’t bode well for an anime that takes itself seriously, like Hamatora, but it is for me since it leaves a positive impression on me and gives me hope that the comedy will resurface again in the series… and hopefully with the same results. 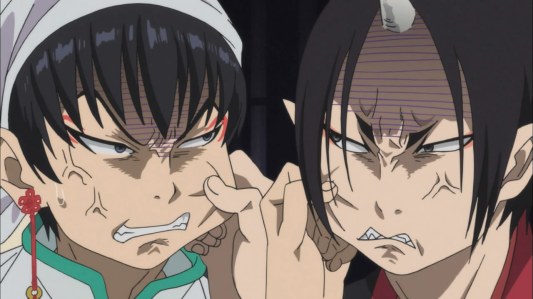 I don’t believe I have ever watched an anime just for its aesthetics (don’t lie, Avv), but the aesthetics and visual appeal seem to be the main reason why I’m continuing to watch Hoozuki.  I am less than impressed with the characters, the story, the comedy and the setting, but the style and presentation are so unique and distinctive that I find myself enjoying most of the episodes because of it.

With the romance between Inari and Kouji being somewhat straightforward and effortless, I find myself turning to the relationships between the Inari and her three best friends, Keiko, Chika and Akemi, to be the most interesting aspect of this anime.  Not only is this storyline desirable since it already presents conflict but Inari’s neutral perspective will require her to play peacekeeper between these three girls and I’m curious how she’ll go about to preserve these friendships and help resolve the resentment that emanates from Chika (and anything else that arises as a result).

With Satsuki revealing her intentions to overthrow the Life Fibers, we now have two factions against the big, bad evil organization at the heart of KILL la KILL.  But which side is better?  Or rather, are we projected to begin to root for Satsuki and her ideals now that we know she’s fighting against evil or are we supposed to side only with Ryuuko and Nudist Beach?  It’ll be interesting to see how these sides evolve as the finale draws closer, but hopefully Ryuuko and Satsuki never join forces since they are natural born enemies.

There are two ways that each side could’ve won the war for Magnostadt.  Reim should have turned the war into one of attrition and stalled Magnostadt’s armies until it began to drain its resources, specifically its magoi and then go from there (yes, I know, easier said than done).  For Magnostadt, they should’ve used their barriers in creative ways and used it to pinch the army between two barriers and focused on the real fighters thereafter.  Sure, it takes a while to generate a barrier, but they could’ve used a series of weaker barriers until they could produce another impenetrable barrier on the opposite side of the army to trap them.

I always love to see a familiar setting change, whether it be through growth, destruction or something simple like a change in seasons with ice and snow covering the sleepy hillside village of Shioshishio.  Of course, I have a favorite among the diversity of changes and winter/snow/silence is always one of my favorites, especially since Shioshisho is already unique and unusual in that it’s an underwater town.

Nobunagun really needed someone like Galileo.  She has quickly become the best part of this anime thanks to her contagious personality, her energetic comedy and her cute and compelling emotions and expressions.  With everyone else in the anime, save for Shio, one level of boring or another, it’s refreshing to see someone like Galileo pop up, bring some vitality and make the anime fun again.

Even though it’s the same joke over and over, I will never get tired of Hiyori’s soul leaving her body in Noragami.  Not only are these scenes some of the most amusing in Noragami, due to Hiyori’s reactions, but that they also signify a change in the series when Hiyori goes from the normal, boring world into one that can interact with the supernatural.  These moments possess a duality, with one being comedy and the other signifying that the series will soon have some action or development of sorts. 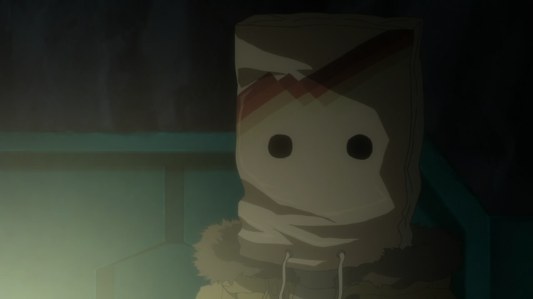 You realize that the only thing left for Samurai Flamenco is to go into space now.  And to be honest, I’m actually kinda looking forward to seeing what this anime will be like in space once we get there. (Note: this was written before seeing the preview for episode 18.)

Even though Kana Hanazawa is one of my favorite voice actresses, I was actually disappointed to hear her voicing the little, lost alien in this episode of Space Dandy.  Maybe it’s a bit of oversaturation or that I associate that voice with too many other characters already, but it just didn’t feel all that special to me.  That’s not to say I didn’t enjoy her work in this episode, just that I think I would’ve enjoyed it better had this role been played by a new or upcoming voice actress than one who is at the top of the industry. 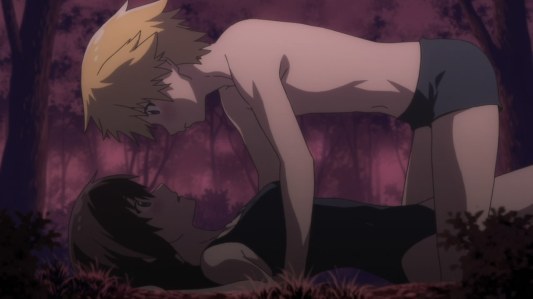 The one major flaw with Toaru Hikuushi e no Koiuta is its artwork and prime example would be the overly simplified swim trunks for all the guys.  While the girls’ swimsuits were decent at best (you figure animators would draw the girls better than the guys), the swim trunks were all flat, monotone, and artificial.  At times, it even resembled the feeble efforts of Cartoon Network to censor the nudity in shows like Dragon Ball Z or Outlaw Star by drawing shorts and things over the naked character’s bodies.  I never thought I’d see the quality of artwork drop that low in an anime before but it certainly has with Toaru Hikuushi e no Koiuta.

If wizards like Koromo can perform divinations, then why don’t they utilize this phenomena in their investigations, trials and even preventing crimes from occurring?  I suppose if that were the case, then everything about the magic court would be broken, but it does beg the question of why to include it for one scene when it would be useful in every case that comes to the Butterfly Law Offices.

This entry was posted on February 18, 2014, 2:01 AM and is filed under 2014 Winter, Anime. You can follow any responses to this entry through RSS 2.0. You can leave a response, or trackback from your own site.