This week: why the self-indulgent nature of anime and manga is mitigated in Inari, Konkon, Koi Iroha, how the art style of KILL la KILL exhibits importance and extravagance, curious about the ending for Chuunibyou Demo Koi ga Shitai! Ren, and why 12 episodes is too short for an anime like Noragami.

Anime trending down this week: Sekai Seifuku – Bouryaku no Zvezda

Considering the direction and progress in this season of Chuunibyou, one might beg the question if or when Rikka will ever outgrow her playful, delusional state.  With Satone appearing to make a terrible love triangle and the romance actually progressing for once, I figured we’d see Rikka mature significantly in this season but it’s actually been the opposite.  In fact, it’s Yuuta’s character who’s changed the most with him becoming more comfortable with Rikka’s antics (notice how frequent he hits her compared to season 1) and even playing along now.  Whereas I thought the finale would be a mature Rikka and Yuuta spending their days happily together, I now foresee an ending where both are obsessed with their made-up fantasies.  Although I’d prefer the former, I feel as though the latter is the more likely outcome at this point.

Anime and manga are self-indulgent media based on how frequent you see these media refer to each other or borrow ideas and trends from one another.  Not only do you see characters talk about anime or manga or games but you’ll revisit common themes, patterns of storytelling and other novelties, like school swimsuits and idols and chuunibyou.  And while Inari, Konkon, Koi Iroha is guilty of being self-indulgent, it doesn’t bother as much as most other anime.  These references and tributes seem more honest or genuine than most, perhaps largely because they seem to be cameos rather than points of emphasis.  You hear that Marutamachi draws manga and Inari’s father is a manga artist, but we haven’t spent much time on that besides pointing out a similarity.  Then you have Marutamachi wearing her school swimsuit, but you don’t have anyone obsessing over her wearing it (thank God for that).  I suppose that what makes Inari, Konkon, Koi Iroha so great is that its flaws are minimized or negligible.  Without these being major concerns, every episode has been a continuous series of positives and other strong points.

KILL la KILL is a brilliant and dazzling anime thanks to its dramatic visual style and appropriate level of detail and aesthetics.  Although the comedy scenes often rely on a minimalistic style and presentation for effective entertainment, the serious scenes and the fighting scenes demonstrate magnificent cinematography, outstanding lighting effects, and marvelous textures (for lack of a better term, those thin, short black lines often seen on character faces and in backgrounds) to stress the importance and grandiose style of KILL la KILL.  Really, the meat of the series is found in these scenes, and the visual style and aesthetics display them with such flavor and richness that every bite is more irresistible than the last.  With such passion and enthusiasm, the art of KILL la KILL brings out the best in this series and is a significant reason why it’s one of my favorite anime of all-time.

How does pushing the Reim army back to the ocean correlate with the army withdrawing and retreating?  Wasn’t the army largely useless and the Fanalis corps doing all the work?  Why not just have the army stay at the beach and have the Fanalis army break through the barriers and then open a pathway for the normal soldiers to march through later?  I mean, just have everyone gang up on Aladdin and the war is over. 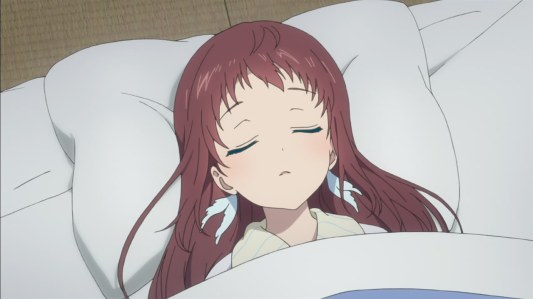 Is it just me or does Shioshishio going into hibernation seems rather dumb and silly by now?  After five years of sleeping with the fishes, the argument between Shioshishio and Oshiooshi seems rather trivial, especially when putting the magnifying glass over the relationships and families affected by their petty bickering.  And knowing that when the residents of Shioshishio wake up, the arguments will still be fresh in their minds, just like it was yesterday and will likely resent the residents of Oshiooshi for it, despite these people having moved on for five years since.  It just seems silly at this point that such an argument lead to such a drastic and unnecessary outcome.  It’s really hard to justify why the whole village of Shioshishio went into hibernation and makes you wonder if they overreact to every little thing that happens in their village.

What’s hard about anime like this with a lengthy and developed story, an extensive and enjoyable cast and a relatively warm and positive reception is that 12 episodes are nowhere near long enough to be satisfying.  Although I’m thrilled a manga of this caliber was adapted into an anime, I know that by the time the 11th and 12th episodes roll around, I’ll be left unsatisfied by the incompleteness of the story and the characters… or worse, be left fuming at an anime original ending.  It’s difficult to watch a series like this knowing that the anime will be too short and that if a sequel is produced, if we’re lucky, that there will have been too long of a lull between the two and the enthusiasm and excitement will likely be lost.  Then again, it’s difficult to know which anime will be a success or not during the early production phase, but I do wish anime that were good like this were at least 24 episodes to start instead of the somewhat standard 12 to 13.

I have nothing intelligent to say about this episode except that Aki is incredibly hot in her Equestrian Club uniform and I’m using this space to show a few screencaps.  Yup, that’s all for this week.

While Dandy and Meow are thankful to have landed on the appropriate sides of the planetary war between Undies and Vests, I can’t help but wonder how the episode would have progressed if Dandy landed on the Vest’s side and Meow landed with the Undies.  It’s a dynamic that would’ve changed the story of the episode completely, especially if the two were held prisoner and the two aliens tried to use them as leverage in their war.  You can’t help but wonder if things might’ve turned out differently for everyone involved… but I suppose that line of thinking is true for any anime where you change the dynamic that much.  Nevertheless, it’s still fun to entertain the idea of how an anime would be different if you made simple switches like these.

With the rather surprising amount of school-life episodes in Toaru Hikuushi e no Koiuta already occurring, I’m hoping this signifies that we have plenty of time to completely explain the war and explore all the characters.  Whereas these school episodes are largely filler material and could be cut if necessary, the war, the character development and the romance are all essentials to the story of this anime.  And considering that we’re about halfway through the series, I figure we’ll have plenty of time to complete all those story elements before the series is over.  I certainly hope the anime didn’t make the mistake of sacrificing these essential elements for more time at school and with friends, but an anime of this caliber and intelligence shouldn’t succumb to such a silly and unfortunate mistake.

This entry was posted on February 24, 2014, 3:57 AM and is filed under 2014 Winter, Anime. You can follow any responses to this entry through RSS 2.0. You can leave a response, or trackback from your own site.