This week: finally warming up to Space Dandy, questioning the selection of weaponry and warfare technology in Toaru Hikuushi e no Koiuta, thoughts on the lack of problems facing one character in Inari, Konkon, Koi Iroha, and issues of QUALITY in Wizard Barristers – Benmashi Cecil.

Back before the season began, I anticipated that Wizard Barristers would be one of the best anime this season in terms of its art and animation.  I based this expectation on the PVs, which featured superb animation, and followed it up with the fact that Yasuomi Umetsu is overseeing the virtually every major aspect of this show, especially the animation.  And while Wizard Barristers has been great at times, it’s still not immune to QUALITY art and animation, with this episode being the worst offender… by far.  While at times there were shots or scenes that were bad in previous episodes, episode six was bad from start to finish.  Sometimes QUALITY is a signal that animators and other artists are working on other scenes for a future episode that are animation-heavy or intense and that this episode suffered as a result.  But that’s probably not the case for Wizard Barristers, even though we’ve seen some outstanding animation during some of the prior battle scenes.  The reason?  The studio: ARMS.

The use of weaponry in Pilot’s Love Song is somewhat… baffling to me.  Based on what we’ve seen thus far of the setting of Pilot’s Love Song, it seems the trainees are equipped with WWI-era rifles or some similar technology.  And while that’s fine for infantry or land warfare, it seems horribly inefficient for aviation combat.  For instance, not only does one have to take into account the difference between the speed and trajectory of the two planes, but, should the bullet arrive at the hull of the enemy plane, I’m not sure the bullet would pierce the steel or damage the plane in any significant way.  And considering that almost all the other planes have some form of machine gun, you wonder why the trainees can’t have the same technology, too.  It seems like sending pilots up in the sky with only a simple rifle and going against these advanced (WWII-era) fighters is suicide.  Then again, maybe that’s a part of the story, for the pilots to go into battle unprepared and undertrained, much like in the movie Gallipoli.

I think I’ve finally warmed up to Space Dandy.  Prior to this episode, I always found myself conflicted with the anime based on its success and failures.  The anime has been a series of hits and misses in terms of its stories, with the range starting at meh (the hungry alien episode) and going up to phenomenal (the zombie episode).  However, I’ve found myself becoming less invested with the ‘episode-of-the-week’ stories and begun to focus on the intelligent comedy, the unique space setting and the charming cast of characters.  And I think switching that transition from the weak stories over to the better aspects of the anime has really changed my appreciation of Space Dandy.  So while this episode’s story is most-definitely a ‘miss’ to me, I mainly paid attention to the comedy and the characters, and found myself enjoying the episode more than I originally expected.  And I think that’d be true for any episode if I went back and rewatched it.  I think the key to watching Space Dandy and enjoying Space Dandy is to really pay no attention to the scenarios or the stories and just focus on the comedy and characters.  I think if I continue to watch the anime like this going forward, I’ll enjoy it more than I have been.

Bishamonten, the vengeful and resentful god of war, possesses quite an army of regalia, with 8 known shinki in total (and at least 9 if you count the one that was murdered previously).  The fact that she possesses so many is an interesting point by itself, especially when you compare her army to those of the other gods, but thinking about the histories and backstories that each shinki has, especially considering their diversity in appearances and their different transformations (form a lion to a whip to a dagger to even Bishamon’s bra), is nothing short of remarkable.  Although I’m certain we won’t see these backstories explored in the anime, I find it interesting to compare Yukine to these 8 shinki and imagine that the story behind their lives and deaths is as difficult for them as it is for him.  I’d love to see the anime explore the cast in detail and for us to learn about each of the shinki we’ve seen, especially those who belong to Tenjin and Kofuku’s Daikoku.  Then again, the anime is already too short with only 12 episodes, so maybe I should be happy with what we’re getting and just consider picking up the manga after the anime is over. 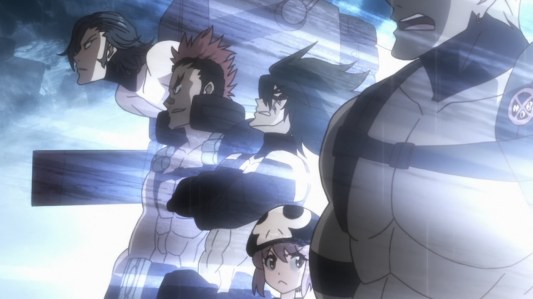 I always enjoy seeing villains or antagonists transition from the ‘bad side’ to the ‘good side’, minus a few exceptions.  However, the Four Devas are a perfect example of one of my favorite forms of character development in anime.  Whereas the Four Devas are now considered ‘good guys’, they’re still the same people that they were at the beginning of the series.  Each character is still loyal to Satsuki and display their strength and pride in their actions, never accepting defeat as an answer.  And the reason for their transition feels genuine and sensible, nothing forced or irrational.  They’re essentially the same people as we’ve always seen but the perspective of the situation has changed, and that shift in perspective shines the light on their characters from a better angle.  We’re able to see more of these characters and learn more about them based on this change and their development holds new meaning.  Seeing the Four Devas make this transition is nothing short of exceptional and yet another line in the growing list of why KILL la KILL is likely to be my favorite anime of the year (again). 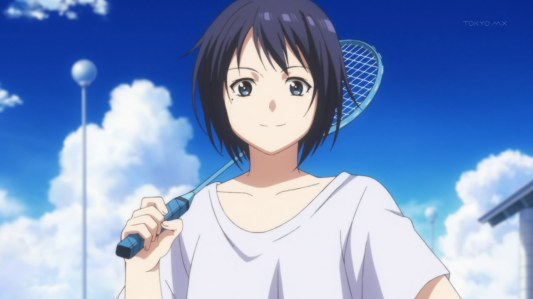 Is it just me or does everyone in Inari Konkon have a problem except Keiko?  I suppose not every member of the cast needs to have a problem, especially since Inari, Chika and Akemi (among others) all have their own issues to deal with.  Still, you wonder what makes Keiko so different than her three friends and everyone else.  Perhaps it’s reasonable to have a strong, reliable character for Inari to fall back on when she needs help, but that shouldn’t make her immune to having her own difficulties.  Or maybe she’s just good at hiding what’s troubling her and is keeping it from her friends… at least for now.  Still, it’s somewhat remarkable to see Keiko be without any major issues when virtually everyone else in the cast has one or two problems to deal with.  Maybe we’ll see Keiko develop a problem as a result of someone else solving theirs, which would be a story development I wouldn’t mind seeing. 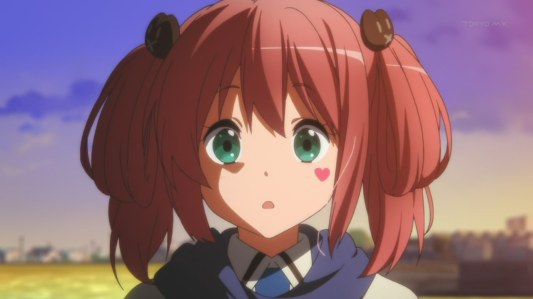 The addition of Satone’s character to Chuunibyou Ren has been as successful as combining water and oil.  In other words, they’ve failed.  The integration of Satone’s character to the regular cast of Chuunibyou has been unsuccessful for a few reasons, but it’s primarily due to her role a ‘love rival’ to Rikka and not as a friend looking to have fun and play around with Yuuta, Rikka and the others.  By adding Satone as a ‘love rival’, her few and infrequent appearances are used to add conflict or difficulty to Yuuta’s and Rikka’s struggling romantic relationship.  As a result, we’ve barely scratched the surface of Satone’s character.  Furthermore, Satone’s choice appearances have had a minimal impact on the other cast members, save for some information she has on Nibutani.  It feels as though Satone was only intended to interact with Yuuta and Rikka, much like the original novels, but it’s still a failure for the anime not to integrate her in with the other members of the cast since Nibutani, Dekomori and Kumin are all primary characters in the anime.  I can’t help but feel that the potential of Satone’s character has been wasted thus far and is a major reason why she’s subpar compared to the others in Chuunibyou Ren.