Back during the Winter 2014 anime season: what about the setting of Toaru Hikuushi e no Koiuta makes it one of my favorite anime of the season, thoughts on how people grew to tolerate or accept the excessive fanservice in KILL la KILL, how changing color schemes impacted the atmosphere in Noragami, and the ideal way to end Silver Spoon S2.

Anime trending up this week: Toaru Hikuushi e no Koiuta

Anime trending down this week: Sekai Seifuku – Bouryaku no Zvezda

Although the overall story was somewhat weak and the artwork somewhere between awful and brutal, Toaru Hikuushi e no Koiuta ended as my favorite new anime of the season thanks primarily to its imaginative, descriptive and influential setting. As I’ve mentioned many times before on previous anime, the setting of an anime is a big predictor of success, not only on the physical environments, technologies and civilizations but how well the setting impacts the characters, the story and how everything builds up from this very essential foundation. And in regards to Toaru Hikuushi e no Koiuta, it accomplished both. The setting of this anime was vibrant and detailed, with unique technologies for the planes and an unparalleled world that was finally explored and explained in these final episodes. Furthermore, the setting was very significant on the characters and the story, centered around the history of Carl La Hire, Nina Viento, and the Wind Revolution. These details on their histories painted a fated hatred-turned-romance between the two that provided a backdrop to their adventure to the End of the Sky and war with the Sky Clan. But, again, the setting is just one component of how I evaluate anime and there were deficiencies and negatives in other areas that keep the anime from a perfect score. Nevertheless, it just goes to show how much I enjoy engrossing and original settings, and I can only hope that future anime will put as much effort into their settings as this anime.

How many other alien hunters are there in the universe? Throughout the series, we’ve hardly seen anyone else interested in hunting these aliens despite the fact that the Registration Center is always full whenever Dandy shows up. Perhaps that’s because, as Scarlett explained in this episode, that new aliens don’t fetch much cash for the capturer, but there’s still quite a few individuals there and even more space ships in the space port. And it’s not to say that there aren’t so big cash rewards like we saw in the third episode. So why haven’t we seen Dandy and other alien hunters fight over a new creature or something along those lines? I think the only thing that comes close was in the fourth episode with Adelie, but you’d figure there’d be more competition in the series beyond that episode. Then again, maybe everyone else is more intelligent than Dandy and have moved on to other careers that are more dependable. Then again, we haven’t seen much of other jobs than besides those at Boobies and a few other choice locations.

With the final episode of the second season of Silver Spoon, we finally, finally had some progress with the Hachiken family coming together. Thanks to a surprise visit from his mother (following a surprise present from Yugo), the silent and distant family started to take steps toward each other in a means of finding a middle ground. To see the mother go out of her way to visit Ooezo is probably the first step in repairing the shattered and fragmented family. It’s a shame that the anime isn’t continuing since now I feel we’ll be making progress toward the central story in the anime, but it’s refreshing to see that progress was made before the end and that we have an idea what to expect should we receive a third season or pick up the manga. Either way, this is probably the best way the anime could have ended in terms of providing an uplifting finale and attracting readers to follow the manga.

The main reason why I watched Samurai Flamenco from Guillotine Gorilla onward was to see what the whole point of the anime was. I wanted to understand why the anime bounced around so much from style to style and story to story and completely out-perform itself with each passing episode. But in the end, there was no lengthy monologue explaining everything and putting a reason to every episode. Instead, the gaping holes in the series were left untouched, like the unresolved murders of his parents, the whole idea of superheroes existing all over the world, and becoming President of the World. Without any resolution, my idea that these were all caused by psychosis or severe hallucinations is unfounded. Without any resolution, you can’t say that any of this was done with a purpose. Without any resolution, it’s empty. So really, with this ending, what was the point of all this?

One of the charming aspects of Noragami were its clean, bright and colorful backgrounds, depicting a modern, urban Japan that blended itself heavily with various gods, spirits and phantoms prone to explode in various kanji after dying. So the choice for this final fight to be in a completely grey and dreary visual style, on that completely contrasts the rest of the series, highlights how desperate and intense the episode was meant to be. The choice to change the art and color schemes for this episode did well in helping it differentiate it from the rest, especially in terms of how serious and severe it was intended to be. It isn’t the most beautiful color scheme and would be second to the colorful one in my opinion, but it did served its purpose in establishing a mood and atmosphere for this episode that showcased a battle to the death and an attempt to retrieve the memories and personalities of the series heroine. I love it when anime do something simple like this to showcase a powerful effect, even if it isn’t immediately obvious. 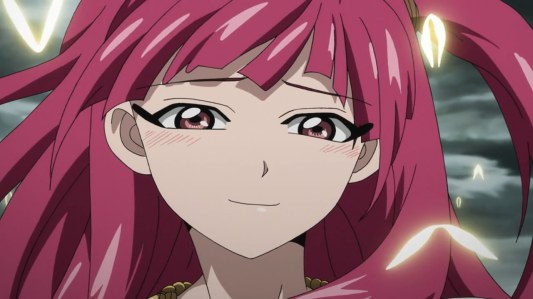 So, wow, there are lots of different people from lots of different countries. I mean, just look at everyone, from their differing appearances to unique fighting powers to their hierarchy between each other. Just how vast and inspirational is the world of Magi? It makes me wish we did not spend so much time in these previous cities, such as Balbadd and Magnostadt, and instead, explored the world to see these diverse cultures, kingdoms and characters. Imagine if, instead of the characters going off to these places immediately during the World Exploration arc (the last time we saw Morgiana before this episode), that the characters would’ve traveled through various kingdoms before arriving at their destinations. It wouldn’t have needed to be too long or too complex, but an episode for each character between their own would have been magnificent for developing the world and laying the foundation for future developments for the anime/manga. It’s a shame that the exploration was limited to a trio of episodes, but I should be thankful we had that much. Still, I can’t help but wonder what the rest of the world is like beyond the handful of areas we’ve seen.

One aspect that continues to amaze and delight me about KILL la KILL is that the series had excessive and over-the-top fanservice, yet was received well by many fans who dislike the filth. By incorporating the fanservice into the story and the humor, and by featuring so much of it that we essentially were numbed to the sights of semi-naked Ryuuko and Satsuki, I think many people forgave or discounted the ecchi elements in KILL la KILL. Unlike other anime which feature pantyshots, bouncing boobs and sexual tension for no other reason than to have them, KILL la KILL had an idea for most of the fanservice used throughout the series. It doesn’t mean that it was completely necessary for the characters and stories, but it was used primarily with a purpose or some design and for more than the sake of trying to be sexy by featuring naked girls in every episode.  But as for why Senketsu’s transformation was so skimpy on Ryuuko or why she was in her shimapan for a third of the series… that’s probably just gratuitous fanservice or fun for the sake of fun. Still, it goes to show that anime fans that would almost never enjoy ecchi anime can enjoy it if there’s some intelligence or meaning behind the fanservice. And it goes to show if you can make an anime well enough, people will be willing to try things they normally wouldn’t.

Since the anime is quite a bit different than the light novels, why not go for something completely off-the-wall for a finale for this series instead of paralleling the novel and ending with a story of a romance. Imagine instead that all these anime original character were actually apart of Yuuta’s chuunibyou and that it was only him, Rikka and the other characters from the novel the whole time. For example, that scene where Nibutani, Dekomori and Kazari were talking to Yuuta that, in reality, it was just Nibutani and Kazari talking to Yuuta but that Yuuta imagined Dekomori there talking to him. Imagine for a moment that the whole thing is so brilliantly orchestrated or that the series cheats a little at times and Yuuta imagines people talk to the other characters when in reality they’re talking to him and that the final reveal is that Rikka is pretending to have chuunibyou in order to get close to Yuuta to save him. Wouldn’t that be something? I think I’d fall in love with the series if it could pull off a stunt like that. But, of course, for that to work, that would mean Touka doesn’t exist, and that would be the worst thing to ever happen to Chuunibyou. Also, I’m sure there are other holes in this theory, but the Touka one is the most important to me.