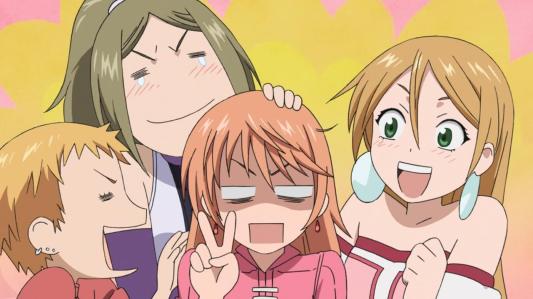 In addition to the anime that are covered in this post, I am also watching Mushishi Zoku Shou and JoJo’s Bizarre Adventure: Stardust Crusaders. I tend to avoid covering sequels in these First Impressions posts, so I won’t be mentioning anything about them other than they both had phenomenal and magnificent first episodes. But since those developments were expected and rather than gushing on and on about them, I’ve reserved this post for all the new anime that debuted last weekend. 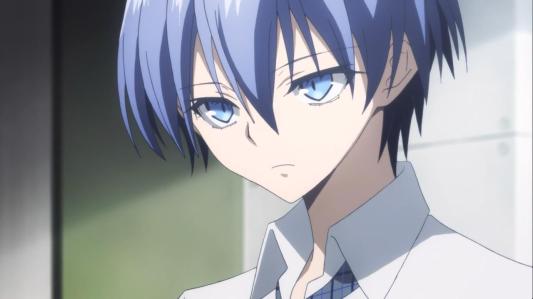 The first episode of Akuma no Riddle is probably not the best indicator for what this battle royale anime will become, but it did enough to spark an interest in the characters and their scenario. The anime doesn’t feature a strong cast of characters with everyone being one-dimensional and lacking diversity (they’re all slightly different crazy assassins) and it’s doubtful we’ll see them with any level of complexity or character development besides Tokaku and Haru. However, it’s the dynamic and relationship between these girls that I find intriguing. Unlike most female-dominated anime where it’s all happy or shiny or whatever (or with artificial drama between mean girls and good girls), this anime has genuine hatred and malice between the characters. I’m not confident that the interactions between the characters and the rationale for fighting will be sound for every instance, but it provides a different flavor than most anime do. The art is charismatic and the constant use of darkness and shadows establishes an uncomfortable atmosphere which bodes well for this scenario. The brief glimpses of action we’ve seen do seem to indicate that the battles will be frightening and well-animated. The scenario is a bit… dumb, but it’s more of a concept or idea to segue into an anime where girls fight each other for the sake of action and entertainment than being anything intelligent or a critic of social norms. What I want from this anime is for there to be action and entertainment with anything extra will be a bonus. That being said, I’m not expecting great things or having high hopes for this anime, and I’d be satisfied if this ends up being a 7 or higher. 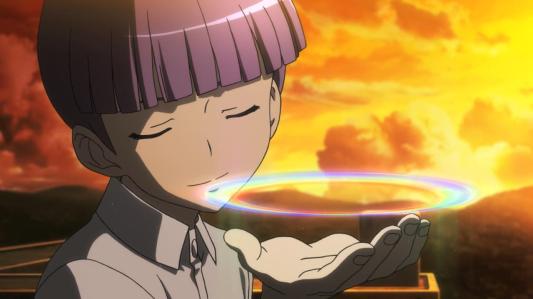 As good of a series as I expect Captain Earth to be, the first episode was honestly underwhelming, and not just because this is essentially Star Driver -1. Without a focus story or an exhilarating battle to culminate the episode, the first 24 minutes felt very lethargic and haphazard. With the excessive number of flashbacks, the pacing jerked back and forth, starting and stopping and interrupting the flow of the story with limited importance for the first episode. The content of the first episode were also very cliché for a mecha anime, which is surprising since the first episode of Star Driver was tantalizing and marvelous (and fabulous). I can’t say I’m terribly surprised that we saw our shounen male lead go from normal highschool boy to giant robot pilot in space in the span of 20 minutes, but I will say it’s lackluster after seeing this pattern for the nth time in anime. It could’ve been better and should have been better. Still, the positives outweigh the negatives with Captain Earth and that’s about all the negatives I have with this anime. The first episode did more than enough to capture my attention and my interest and I’m fascinated in where this anime will go. I’m looking forward to exploring the characters of this anime, the technologies of this setting and see what the conflict is between the villains and GLOBE. The art and animation are gorgeous and there’s personality to the style that heartens and brightens up the characters. I’m positive the anime will improve once these introductions are over and that this first episode is more an idiosyncrasy than any sign of concern. I’m not lying when I say that this first episode was a bit disappointing, but I expect that this will be the last time I use that word to describe this anime. 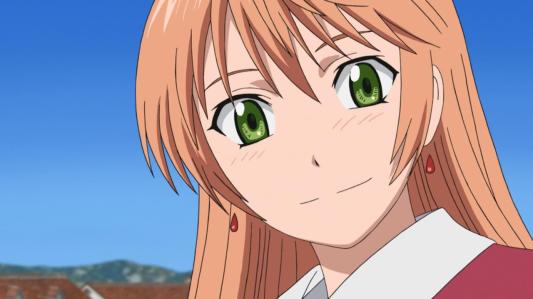 If I had only one word to describe Soredemo Sekai wa Utsukushii, it would be “charming”. Just about every aspect of this anime can be accurately described by this word, from its charismatic and delightful main character, Nike, to its enchanting, intricate fantasy setting, to its amusing comedy and even at times to its art style, which featured many cute chibi or simplistic scenes. The dynamic and focus of Soredemo Sekai wa Utsukushii might change significantly now that Nike has met her future husband, Livius, but the atmosphere and the ambiance of the anime shouldn’t change all that much. I can imagine as the story progresses, the relationship will start off rocky but then slowly repair and that Nike and Livius combine to save the Principality of Rain from whoever the shadowy, evil military people were. The story for Soredemo Sekai wa Utsukushii has the potential to be quite good depending on how the romance develops and how they use it in this setting to save Nike’s homeland or expand upon Livius’ empire. We really haven’t seen much of anyone besides Nike, but her personality and attitude to her setting and surrounds bodes well for this anime, especially if some of the other characters are weak or uninteresting. The fantasy setting is elegant and depicted well, with a significant amount of effort used to design a world that will impact the characters and their story. I’m not exactly quite sure of how the setting will do this, but the idea of the Sun Kingdom being a rainless capital and a princess who can summon the rain is already promising. If I had any negatives with this first episode, it would be that the latter half was not as interesting or amusing as the beginning, but isn’t any cause for concern since the series will be different now that Livius is in the picture. Otherwise, this seems to be the most impressive new anime of the season for me, so I’m pleased to be picking up and keeping Soredemo Sekai wa Utsukushii for this season.

None in this set, which means… 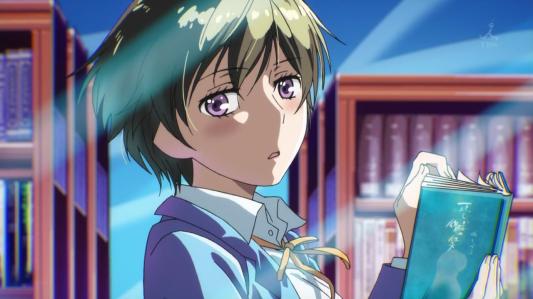 Perhaps the most damning aspect of Bokura wa Minna Kawaisou is that I did not find any of the characters interesting. And the most damning aspect of that is that the only other male presence than the tsukkomi main character is the roommate who’s character bio could be summarized as “hilariously un-hilarious pervert”. His comedy is so tired and old in these types of shows that it’s painful to watch. Yes, we’ve seen perverts before in anime. Yes, they all tell the same, exact jokes. No, they were never funny to begin with and will never be funny. Please stop making these characters. As for the remainder of the cast, they weren’t nearly as bad but none were impressive. The male leads is plain and uninspiring, and it’s sad that this “Insert Yourself Here”-kun is the norm for anime in a school setting. The drunken adult will be a free-spirit who flips between manic and depressant depending on her dating scene. Yawn. The only character that had any potential was the heroine of the series, Ritsu, but I won’t stay around to see if that’s true or not. The scenario is pretty much like any of the other co-ed dorm anime out there, and nothing about the writing or storytelling seemed innovative or original. The comedy was banal, predictable and tediously boring. The only positives are that Bokura wa Minna Kawaisou has striking visuals thanks to its outstanding use of lighting and liberal use of colors. The anime is certainly nice to look at, but there needs to be more in order to keep me watching. The directing did elevate the product with its pleasant illustrations and choice cinematography, but everything else about the first episode was a quick turn-off for me. One episode is all I need to know that Bokura wa Minna Kawaisou is not an anime for me. 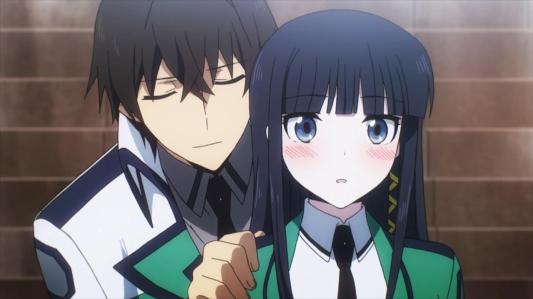 So, I originally thought the whole siscon/onii-chan/incest relationship between the male and female leads would be the downfall of this anime for me. Turns out it wasn’t, mainly because there were plenty of other elements to criticize, in conjunction with that, for this unsatisfying light novel adaptation. I’m not exactly thrilled at the dynamic of the relationship between Tatsuya and Miyuki, but it bothered me fall less than I had anticipated. It was still troublesome, but it’s not as bad as the relationships shown in other franchises. Instead, the worst offender for Mahouka is the whole ‘magical school’ setting, especially with the division in classes as a means to establish an artificial social hierarchy in school. The whole thing is such an unimaginative and routine setting nowadays in anime that I can’t help but feel bored when they’re reviewing their world history and the laws governing magic uses and whatnot. Couple that with the 10,000th school anime out there and the setting turns into quite a powerful sleep aid. The male lead, Tatsuya, is supposed to have a cold and difficult personality, but it comes across as unwelcoming and uninteresting. With him being one of the stronger (strongest?) characters too, it just makes his character unappealing. Miyuki was markedly better, but still is flawed thanks to her attraction to her older brother while being the most beautiful/athletic/smartest/blah blah blah girl in the school. Seriously, it’s just light novel fanwank at that point, to have the two main characters be perfect like this. And without any real positives to counter these titanic negatives (the best aspects of this series are mediocre at best), I just can’t find a good reason to continue this anime. 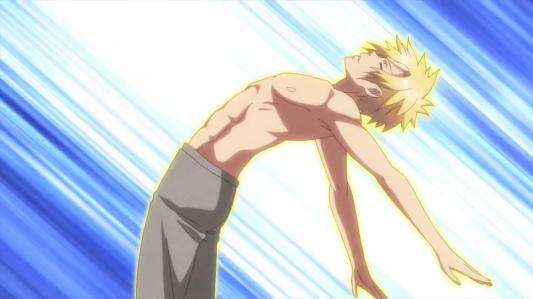 The best thing going for Kamigami no Asobi is that I absolutely lost myself during Apollon’s ‘way-too-long’ transformation sequence at the beginning. I haven’t laughed that hard at an anime in seasons. The next best thing was riding the giant, neon pink Pegasus through space into battle right after. The last best thing about this anime is that I stopped myself after about 7 minutes with the rationale that nothing would ever beat those two things. That and I was miserably, miserably bored. Kamigami no Asobi was a longshot for me to keep, but I thought it would be worthwhile to watch the first episode since Greek mythology is cool and the main girl was pretty cute. Turns out the anime was much more than I expected in terms of unintentional (or was it intentional?) comedy in the first couple minutes. Then, after that, it was pretty much what I expected with a reverse-harem scenario that registers a zero on my scale of interests. It did more than I anticipated, which is great, but I just can’t see myself watching this for an entire season, especially when I can’t even make it through half an episode.

I have also scanned through the first episodes of a few anime not included in this post, but I did not see anything worthwhile in any of those shows. That shouldn’t be terribly surprising since the anime that aren’t mentioned in this set were shows I was not seriously considering before the season began. That’s not to say some shows turned out to be better than expected, but that there’s nothing worth keeping or even thinking about keeping among those anime.

This entry was posted on April 9, 2014, 8:00 AM and is filed under 2014 Spring, Anime, First Impressions. You can follow any responses to this entry through RSS 2.0. You can leave a response, or trackback from your own site.