A long, long, long time ago, whenever these episodes aired: explaining why Ryuugajou Nanana no Maizoukin doesn’t need a villain, why the lives of Sora and Shiro are worse now than before in No Game No Life, thoughts on why the relationship between Tokaku and Haru isn’t a romance in Akuma no Riddle, and using variations in cinematography to keep the reaction shots interesting in JoJo’s Bizarre Adventure: Stardust Crusaders.

Anime trending down this week: Hitsugi no Chaika

One aspect of the romance in Soredemo Sekai wa Utsukushii that appeals greatly to me are the fights between Nike and Livi. To me, genuine character growth is born through conflict, so seeing these two lovers quarrel yet remain together is a huge positive for this anime. Many times, romances in anime are simple and tame stories, often beginning with love-at-first-sight, progressing to countless misunderstandings and then ending the anime before anything exciting happens. The romance in Soredemo Sekai wa Utsukushii circumnavigates this tired formula by forcing Nike and Livi together through an arranged marriage. The two are unnatural for each other and have been forced to work through their differences in order for the marriage to work. Nothing about their relationship has been easy. Nike and Livi have had to work to create the relationship that they have now. And as a result of this effort and sacrifice, the two have an honest romance that has been more than entertaining to watch. Because of the fights between these two, Nike and Livi have become better people and have developed a true romance between each other. It’s because of all this hard work that has made the romance in Soredemo Sekai wa Utsukushii one of the best attributes of this anime.

Ryuugajou Nanananananananana no Maizoukin doesn’t need a villain. From the beginning of the series up until this episode, Nanana described the story of a generic high school boy laboring to live a life on his own and attempting to help his new ghostly friend move on by solving her mysterious murder. The anime concerned itself with Juugo’s internal conflicts with his father and his gang, Matsuri, as he explored ruins, collected treasures and made friends with the wacky residents of Nanae Island. But now, with the arrival of a generic high school boy villain, the perspective of the series has shifted and gone from one centered around Juugo’s growth as a person to stopping this evil dude from finding random treasures. The focus is now completely different than the beginning of the series with only a handful of episodes left to go. And while the series will be clever and tie this back to Juugo and Nanana’s death, it isn’t necessarily the path the anime should go this late into the series. There are still plenty of potential left for Juugo and the other cast members, not to mention a handful of other ruins that we’ll never explore or material we’re now missing. It’s rather odd that they suddenly thrust a character like Ikusaba into the series when he doesn’t really add any value. It might just be my opinion, but I think adding Ikusaba in at this stage of the anime is a costly mistake.

Ping Pong the Animation has some of the most striking and outstanding visuals of the season. The tournament matches are gorgeous in terms of their animation, their cinematography and the overall directing. However, the topic of this review is the visual style and how Ping Pong utilizes techniques that are rarely seen in anime. Among the most obvious are the pencil lines used to denote contours, depth and shadows. It’s a style not exclusive to Ping Pong but one that Ping Pong uses remarkably well, especially with how it complements motion during scenes of extensive animation. It’s minimal but it’s highly effective. One style that is exclusive to Ping Pong, at least to me, is the heavy pencil shading shows in the lower-left screenshot. It’s an outstanding effect; a simple, yet bold shadow that enhances the moment we witness Hoshino’s trickery and aggressive return. It’s profound in how it supplements that shot and it is distinctive to Ping Pong’s unique style of art and animation. The cinematography is exceptional too, utilizing split screens more than any other anime I have ever seen. Likely a tribute to the manga and its panels, the split-screens are able to illustrate all the essential movements of a table-tennis match while simultaneously communicating the thoughts and emotions of the players and the spectators. The visuals of Ping Pong are brilliant and are truly innovative when compared to the standard anime these days. It’s thanks to this visual style that helps Ping Pong stand out from the rest… or rather, stand above the rest.

No Game No Life (Episode 8)

Although No Game No Life is one of the more entertaining anime of the season, the lives of Sora and Shiro aren’t particularly fun. While it’s true they don’t have to worry about food or shelter or interesting games to play, most of their time is devoted to learning about their world, studying the unusual races, and trying to identify all the different ways to win the various games they’ll play. It’s not like their old lives, where they resided in a small, cramped room all day and played various games merely for fun. Here, it’s actual work. Everything that Sora and Shiro are doing are related to these games and winning in general, but they’re putting a lot more effort into these games than ever before, especially with so much more at stake. Because of that, I can’t help but think that the lives of Sora and Shiro are actually worse off than they were before. Sure, it’s more exciting and thrilling and a nice change of pace, but considering the extra amount of work and stress that’s now a significant part of their lives, I’d have to say that their lives are worse now after being transported to this world.

If there’s one thing you can predict from JoJo’s, it’s that it is unpredictable. And because the anime is unpredictable, with all its various twists and turns, you can expect there will be a number of reactions shots in every episode. And while reactions shots are an integral and essential aspect of JoJo’s, the frequency of these shots and the lack of significant changes in emotion or context mean they’re more likely to grow stale or boring or mundane than anything else. That’s where the creative expertise is most necessary and quite apparent in JoJo’s. By utilizing differing camera angles, a massive variety of colors and some unique effects, JoJo’s is able to diversify these similar shots to make each distinctive and unique. In actuality, all these are all shots of character’s face looking surprised. But in reality, these are all idiosyncratic and all unique. Each one of these shots looks and feels different from the rest. And as a result of this artistic merit, the numerous and often overabundant reaction shots in JoJo’s never feel tiring or overused. It’s a wonderful method of diversifying shots through simple techniques that manages to have a powerful effect on the anime in the long run.

Watching Kaori’s memory slowly recover and her life steadily improve makes Isshuukan Friends one of the more heartwarming and encouraging anime of the year. However, what if Kaori’s memory never developed and the series was stuck with her forgetting everyone at the beginning of every week, like in the first few episodes. What’s nice is that we’re able to see Kaori improve as the series progresses, but how would things be different if her memories remained the same as they did at the beginning of the series. How would it affect Yuuki? And how would it affect Shougo and Saki, too? It would be a different direction to take the story and the anime in, and it’s something worth thinking about since that’s how the story began. However, it’s probably best to see Kaori’s character mature and develop in the series in a way to move the series forward. With only a limited number of episodes and a story to tell, it’s for the best to see the series move in the way we are seeing. Nevertheless, I’d still like to see what’d happen in a story where Kaori’s memory never improved. 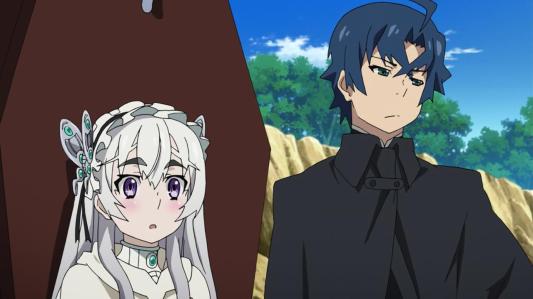 What are the limitations of magic in this world? From what we’ve seen so far, magic is able to be utilized for a number of pertinent activities, from driving a vehicle to operating a gun (casting spells) to even mundane tasks, like cooking or communication. But what else can magic be used for? We know that magic fuel is readily bought and sold in common marketplaces, despite it being a precious material derived from the memories of living beings (but hey, let’s use it for fireworks!) We’ve also seen it able to control weapons that can fly through the air and also used to cause explosions that would destroy military defenses. We’ve also seen it used for a number of other odd things, too, like with the valley of fog. So really, what are the drawbacks of magic in this world if it can be seemingly used for everything and is able to be bought and sold without the memories problem that happened to Chaika?

For two characters who spend every moment with each other, he relationship between Tokaku and Haru hasn’t been very romantic. The two are essentially a couple, but Tokaku and Haru don’t display any genuine or honest affection toward each other. There doesn’t seem to be any love or romance or sexual attraction between the two either. Hell, it’s almost hard to call them friends given Tokaku’s cold personality and hindered social skills, but Haru makes up for more than that with her bright, outgoing personality. Still, the two don’t even hold hands or look passionately into each other’s eyes. It’s more like the two are business associates than anything else. However, there’s still quite a bit of content left in the series and things can change quickly, especially since the two have been together for the entire series. It will be interesting to see what happens to the relationship now with the series approaching its finale, especially with the mystery of Haru’s character still in the dark.