Back whenever week 8 was and whenever these episodes aired: thoughts on the expressiveness and emotion in Hanayamata, wondering where they get the ideas for episodes for Space Dandy Season 2, linking unique character traits to symbolism in Aldnoah.Zero, and thoughts on the split between mountaineering and cute girls in Yama no Susume Second Season.

Anime trending up this week: Hanayamata 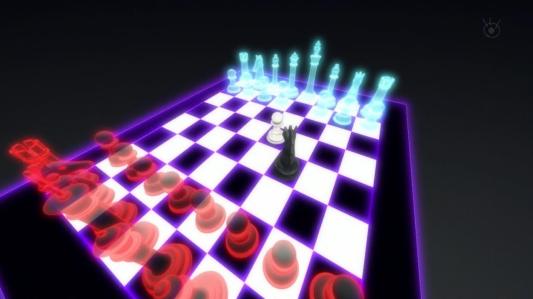 I don’t claim to be an expert at chess, but I think I know more than the people who made Zankyou no Terror. Take a look at screenshot above and tell me if you notice anything wrong. In case you forgot, since this episode aired weeks ago and this post is unreasonably late, this was shown as Nine’s opening move after Five moved her pawn forward. In case you haven’t noticed it yet, look at where the black knight sits and where it was at the beginning of its turn. That’s not how a knight moves… unless they’re playing made some broken version of chess in which the knight moves up 3 spaces and to the side once instead of moving up 2 spaces and to the side once. Then again, they were playing a game of chess superimposed on the map of the airport, so maybe they had to make some changes for it to work in that specific geographic location. But then again, wouldn’t hide-and-seek be better considering the situation and the circumstances? 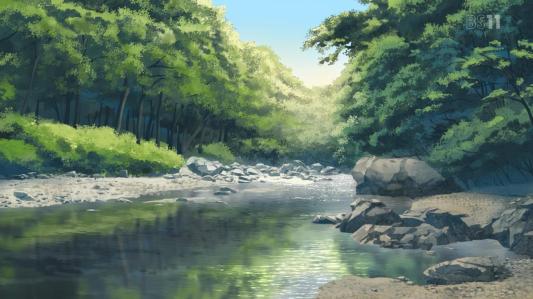 Yama no Susume seems to be split between two discrete premises: exploring the sights and visiting landmarks around Japan and featuring its cast of cute anime girls doing cute anime things. The first half of this episode focused primarily on a short walk to Azuma Gorge, a scenic and tranquil river cutting through a dense forest. The latter half of the episode was fixated on Aoi buying a sexy swimsuit and then being embarrassed about wearing it. The episode did well about relating the two topics together and by linking the sexy bikinis to swimming at Azuma Gorge, but the episode didn’t need to dwell on Aoi’s experience in a department store or the storyline about her being embarrassed to being in a swimsuit. Yama no Susume is an anime about mountain climbing and exploring the outdoors as a means of developing Aoi’s character and watching her grow as a person. It would have been outstanding if they linked Azuma Gorge with some legitimate character growth, such as Aoi wanting to seek out and explore other landmarks on her own or leading the other girls there on her own after Hinata became sick… but no, instead, it was another segment of fanservice which this season of Yama no Susume seems to be so fond of. And really, it wasn’t that bad of an episode, but it could’ve included visiting two landmarks in Japan instead of one landmark and the swimsuit section of a department store.

Given how long the ghouls have been present in metropolitan Tokyo and how well they seem to be studied and how well they seem to be publicized by the media, isn’t it surprising that there hasn’t been an attempt to understand these monsters? For example, why hasn’t there been a push to move the ghouls to a location away from Tokyo and supply them with food as a means to prevent them from murdering people in Tokyo? Why exactly do the ghouls need to live in the big city and constantly risk their lives when a suitable alternative would be for them to move to the outskirts, form their own community and live a stable life away from danger? Then again, the story would be far from exciting if it were purely diplomacy and politics between the two sides, so I suppose the antagonism between the two sides does spice up the action and drama. Then again, I’m surprised no one has suggested relocating, especially with the café acting as a sanctuary despite being surrounded by constant danger.

Ever wonder where the ideas for Space Dandy episodes come from? With every story so distinctive and unique, you can’t help but wonder if these episodes are all ideas from authors who were unable to materialize these stories into independent shows. For example, this episode of Space Dandy feel like a cinema… or at least it felt like a cinema story that was reduced to only 24 minutes. But I get the feeling that Shinichiro Watanabe, the writer for this episode, had this idea in his head for a while but was unable to pitch the idea to producers or studios as an independent and stand-alone film. But given the opportunity with Space Dandy, he tailored his project into an episode that felt vastly different from the rest in this series. Again, it’s not just this episode, but many of the others felt like ideas for other projects that were written as an episode for Space Dandy. Not all of them have felt this way, but enough have displayed exceptional levels of complexity that you can’t help but wonder where these ideas came from and what they were originally planned for. 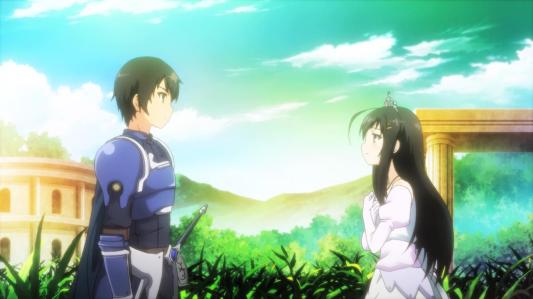 Recently, Rokujouma no Shinryakusha!? has concentrated on specific characters with these character-centric episodes. These last two episodes were solely on Theia. The ones before this were primarily on Sanae, and the ones that follow episode 7 are on Yurika. It makes sense given the limited time-frame of the series, the extensive material available from the light novels and the fact that there are four main girls to cover before the episode ends in a few weeks. However, my note for this episode isn’t about the structure of the series but how well the series incorporates the entire cast in these episodes.

Yes, the way Rokujouma no Shinryakusha!? integrates its entire cast into these episodes is truly impressive. And it’s not just including the cast in these episodes but utilizing each character as a participant in the story instead of just someone in the background. Kiriha helped out with the play and surveyed the gym for suspicious characters, Sanae helped defend Theia by attacking (not sure if that’s the best word for what she did) Clariosa, and Yurika spent the entire arc watching over Hercules, the loveable (except to Ruth) rhinoceros beetle. It isn’t the best example of connecting the entire cast to Theia’s story, but each character proved a useful part in these two episodes and no one was demoted to the background and forgotten. Given the size and relationships of the cast in this anime, I was expecting there to be lapses with the characters, but Rokujouma no Shinryakusha!? has exceeded my expectations in how it employs its cast. It bodes well for the remainder of the series, though I am curious how it will wrap everything up when it concludes at the end of this month. 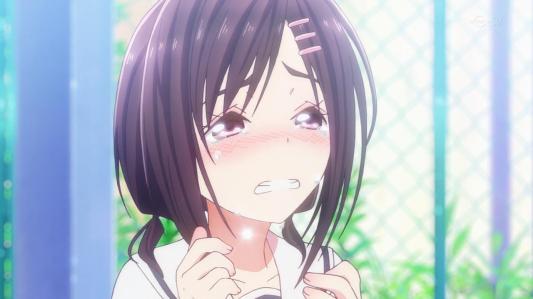 The intensity and elegance of emotion in Hanayamata is remarkable. Despite its appearance as a cutsey, moe slice-of-life anime, Hanayamata is one of the most sophisticated and expressive anime this year… and it accomplishes this with relatively simple writing and rudimentary character relationships. How the anime accomplishes this inspiring feat is that it is straightforward with its characters, their situations and how they display their emotions. This allows the characters to present their emotions without confounding factors, such as a dominating overarching story that would otherwise pull its attention away from the girls. Watch a scene, any scene, even comedy scenes like the one where all the girls were wearing animal ears and animal tails; you’ll see a rainbow of emotions from each of the characters, ranging from embarrassed to angry to happy and various others in-between. The anime is free to explore these characters and are able to present them with unbiased emotions and passions. Beyond how the dynamic of the series plays a fundamental role in the expressiveness of the series, the artwork contributes a significant amount, too. Not only do the highly dramatic, teary-eyed scenes help convey emotion, but the constant emphasis on chibi reactions aids in the expressions too, especially for situations that call for surprise, embarrassment, joy or lighthearted sadness. It’s amazing how well Hanayamata handles the emotions of its characters and how it illustrates them, and it is one of the main aspect of this endearing and charming anime that leaves me smiling after every episode.

Seishuu appears to be quite accustomed to life in the Gotou Islands. At what point does he consider returning home to Tokyo and returning to the lifestyle that he was originally comfortable with? Or rather, what more is there for him to accomplish in the Gotou Islands that will significantly contribute to his work as a calligrapher? Or maybe, as his character is evolving, does he realize there is much more for him to learn while on his own than what he can accomplish back in Tokyo? To me, it feels like Seishuu has accomplished everything he sought out to accomplish when he moved into his new home in the first episode. Everything since that point seems to be fun and games where he continues to bond with the locals and learn about specific customs that he would otherwise never learn back in the behemoth that is Tokyo. But are these fun and games really what he needs? Is he able to retain this knowledge and understanding back to Tokyo and reproduce his efforts without the help and inspiration from these islanders? I’d like to see Seishuu go back to Tokyo for an episode or two, only for him to return to the island in the final episode as a means of showing where his character is and how life on the island has caused his character to grow-up in ways that he never expected. Of course, the real ending to this anime will incorporate these elements to various degrees, but the principal events may be different than what I am hoping for. It’ll be interesting to see how Seishuu and the locals react at the end of this anime, especially for characters like Naru who have grown to depend on Seishuu. 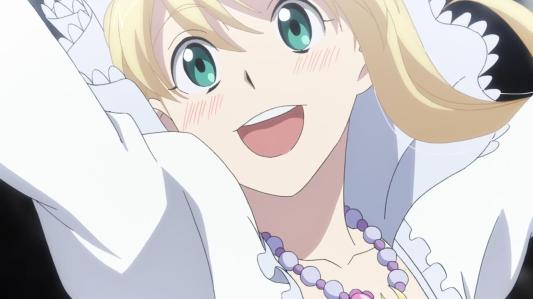 It fascinates me to see what fascinates others. For example, Asseylum, the Martian princess who’ve never been to the blue planet, is fascinated with birds. We learned about this in the first episode when she was chatting with Slaine before descending to Earth and it was a focal point of this episode, both in a flashback with Slaine and when viewing seagulls with Inaho. It’s unexpected to see a character fixated on such a trivial subject yet it provides an insight into the character beyond the obvious. To Asseylum, the birds that soar through the blue sky symbolize freedom and liberation, which is something that she, herself, admires. After all, she has been used by her father, the knights, the assassination faction and just about every Martian as a justification for heading to war with Earth. She has been a captive of her own people, yet captivated by the birds that fly so freely on Earth. Of course, this is purely a form of symbolism that Asseylum enjoys them so much and is likely to have little impact on the story. Still, it’s something that I have always enjoyed when learning about a character and I find that it was put to an excellent use here in Aldnoah.Zero.

This entry was posted on September 16, 2014, 2:38 AM and is filed under 2014 Summer, Anime. You can follow any responses to this entry through RSS 2.0. You can leave a response, or trackback from your own site.