Anime trending down this week: Yoru no Yatterman 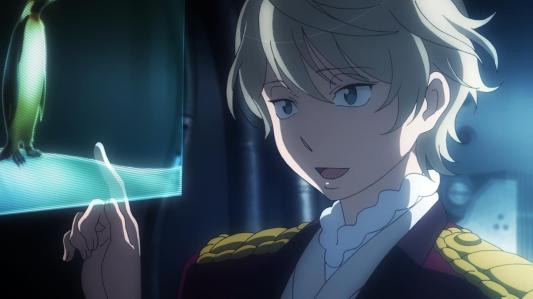 Was Aldnoah.Zero originally supposed to only be a 12-episode anime? Given the lack of substantial content since the ‘dramatic’ non-end to the first season, the woeful reset to start the second season, and the insertion of several new character (most of who were never even mentioned in S1), I’m beginning to endorse the idea that the original concept for Aldnoah.Zero was 12 episodes. This entire second season has done nothing to advance the story and has done little to show character development outside of Slaine’s inconsistent representation. It’s just fluff now, making us wait through weeks of non-story to get to the end where we’ll probably find ourselves facing another disappointing conclusion to another season of Aldnoah.Zero. Fun, isn’t it?

I’m actually rather happy the series told us, unprovoked too, that Onna is a dead human. To me, it means that this isn’t the big reveal at the end of the anime. To me, it means that there’s more to the series than telling us that Onna died on Earth and is not of the same mystic origin as Decim and Nona and Ginta and the others. It means that the anime has a narrative that doesn’t culminate in a shocking twist. It’s a signal that this bit of information is merely another puzzle piece to the viewers, and that the anime has a narrative of greater substance and significance than one character’s roots.

Since the governments of Flonyard have seemingly perfected the dimensional portal technology that allows Shinku, Nanami and Becky safe passage between Earth and their magical realm, why not consider the possibility of starting a tourism business on Earth where humans pay outrageous prices to go to a world where everyone is a cute girl with animal ears and an animal tail? I mean, imagine the demand; imagine the money they’d make. Shinku, Nanami and Becky would become millionaires overnight and never have to worry about going to school again. And imagine all the new foods, technologies, industries and whatnot that’d benefit the citizens of Flonyard, too. I’m guessing it’s only a matter of time before one of those kids enters business school and puts two and two together.

The monotone background characters in Durarara!! help create a division in the anime between the meaningful characters and the mass of others who populate the streets of Ikebukuro. Without these background characters filling the streets, the restaurants and the other public areas, the hustle and bustle of the dynamic Ikebukuro would feel empty and lifeless. There needs to be a constant presence of others to make the crowds we always see, to showcase and highlight the spectacle that the special characters of Durarara!! always seem to create. They’re a bunch of nobodies in the world of Durarara!!, but at the same time, they’re somebodies given the role they have in creating a living, breathing city. However, the choice to color them a monotone grey is also appropriate given some of the content of the series.

True, if the throng of grey, monotone background characters were colored normally, it would take away from the visual draw that the main characters have. The use of a constant grey takes away from their presence and gives a stronger emphasis to the acting characters in Durarara!!. But there’s more to it than that. In Durarara!!, the gangs all have specific colors… except, of course, for the Dollars, which are frequently cited as the colorless gang. If you remember back to the first season, to episode 11 of Durarara!!, it was that mass of colorless people who revealed themselves to all be members of Dollars. At that moment, they were wiped of their “colorlessness”, and they each revealed their true colors. Turns out, that each person in this crowd had their own unique colors, their own unique appearance, but were all one part of a greater cause. Now it doesn’t mean that everyone, everywhere in Ikebukuro is a member of Dollars, but it does give a bit more significance and meaning to the grey background characters that reside in this borough of Tokyo. Combine all these elements together and what seems to be a simple aesthetic decision for a single palette for background characters suddenly means so much more when looking at everyone, everywhere in Durarara!!.

As Stardust Crusaders has progressed, the stands have become more creative and more intimidating. As a result, the battles against them have become more intense and noteworthy, with Anubis being one of the best battles yet in Part III. However, the comedy at the end, as has been the case recently, really undermines the greatness and sensation of the fights. Although this style of humor is a staple of JJBA, the endings to fights like these disagrees with me, by giving me a sudden change in flavor when I’m still enjoying the achievement of defeating a powerful, and above all, serious enemy. It works perfectly fine for comical battles, like those between Khnum and Tohth, or most recently with Bastet, but I would’ve preferred a more thoughtful tone to Anubis’ demise than what we saw.

So Admiral is reshuffling his (or her???) fleet, and is again matching each ship into cohorts of 6. Again, six; no more, no less. But since this isn’t exactly the browser game of Kantai Collection and there are no specified spots to order the girls, I wonder what would happen if Admiral tried to put 7 ships together. It’s not like there’s anything stopping Admiral from wanting 7 ships together. Or 8. Or really, any number other than 6. Or, what’d happen if another ship tagged along with some friends on an expedition? Does the universe implode if there are more than 6 ships together at a time? Has it ever occurred to Admiral that there’s enough water in the blue, blue oceans for more than 6 ships at a time? I’m really beginning to question the merits of this Admiral when most of the anime are about these ships struggling with school, eating sweets, and going on wacky adventures. 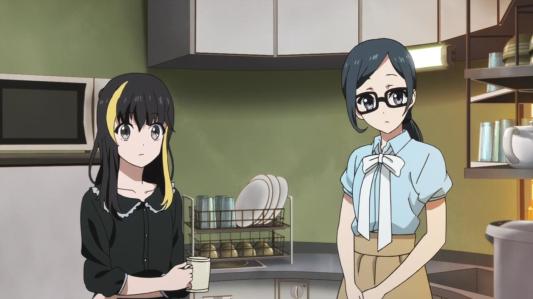 One of the loveliest aspects about this second half of Shirobako is the new personality Musani Animation has thanks to its new employees. Andou, Satou, Kunogi and even Hiraoka add to change the dynamic of Musani Animation’s office, helping bring new energy and individuality while also impacting the roles and responsibilities of the returning characters. For example, Aoi’s personality has shifted as a result of her new job, especially in regards to how she interacts with Andou, Satou and Hiraoka. Ema, who is still a new keyframe artist, has taken Kunogi under her wing and is providing support and help whenever she needs it… which seems to be all the time. It also helps that some of the established characters are missing too, such as Honda, Yano and even Ochiai. What this does is it gives this second season of Shirobako a fresh, new flavor in addition to all the other changes with switching over from Exodus! to The Third Aerial Girls Squad. It’s just another impressive detail that has a profound effect on the anime as a whole, helping us see another side of the industry that can only be observed through contrasting the first and second halves with each other. 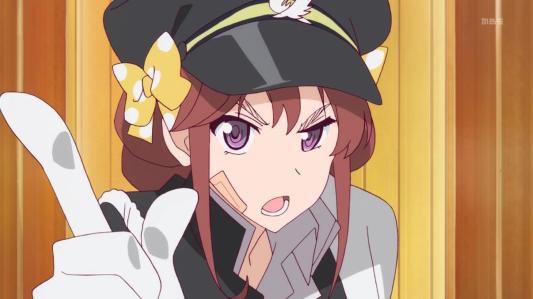 The checkpoint girls in The Rolling Girls might be my favorite characters in this anime. Thus far, we’ve seen three very similar, yet slightly different, girls managing three different checkpoints. Given how significant the independent nations are in The Rolling Girls, these border girls are an essential aspect to the setting, and it’s no coincidence that we’ve met with three already. Although their names aren’t mentioned in the anime, they’re all named Banko (ばん子). And although each one has a similar appearance, wears the same uniform, and speaks with an unusual accent (since they’re from other countries within this fragmented Japan), there are slight differences between each girl. The one managing the boarder in northern Tokyo (episode 3) has orange bows with white polka dots in her hair and a Band-aid over her nose. The girl at the western Tokyo border (episode 4) wears green bows and has a small bandage over her left cheek. This episode’s Banko, as you can see above, owns yellow bows and has a large bandage on her right cheek. Otherwise, if it weren’t for the bows and the bandages, we wouldn’t be able to differentiate between the Bankos. And though these girls are mainly played as a joke, especially with their accents, they provide some refreshing humor and useful information about the areas that set the foundation for each episode. The Banko girls won’t play a significant role in The Rolling Girls, but they’re a delightful running gag in this anime if nothing else. And even though their roles are small and infrequent (although Banko narrates the episode previews for The Rolling Girls online), I hope we continue to see these girls appear in the series… and maybe even see a couple of them get together.

This entry was posted on February 23, 2015, 2:06 AM and is filed under 2015 Winter, Anime. You can follow any responses to this entry through RSS 2.0. You can leave a response, or trackback from your own site.