I’ve been home for a week, and was very, very behind on everything… not just including anime. I’ll have one more of these First Impression post for Spring 2015 despite the fact that many of these shows are already approaching or are already on their second and third episodes. That also means I’ll probably start one of my Weekly Anime posts soon, too, once I catch up on everything from last week. 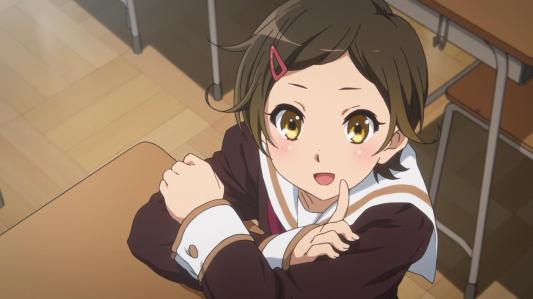 Even though I’ve always enjoyed orchestra music, I have a depressingly minimal amount of knowledge regarding music, instruments, or even what the hell a band does to practice and what not. What sells me on Hibike! Euphonium is the fact that this anime answers all these questions and much, much more. Although this first episode was primarily concerned with introducing the four main girls and Kumiko joining the band club, I was delighted to learn in detail about various aspects of music that were unknown to me, and this is a trend I expect to continue throughout. Not only that, but the art and animation are easily among my favorite for this season. I have always enjoyed KyoAni’s aesthetic style, given the amount of design and novelty they have in their backgrounds. The girls are cute, too, which is always a plus. Oh, and the director, Tatsuya Ishihara is pretty good, too. Really, there isn’t anything I don’t like about Hibike! Euphonium, but the one downside I have right now is that I don’t necessarily love anything about Hibike! Euphonium (aside the backgrounds). I want to see this anime take the next step and add more purpose and meaning to these characters and for the anime to be more than just aiming for the nationals or whatever. I’ll be okay if the anime isn’t much more than that, but I want something more… something on top of this educational, insightful and appealing anime. If it can do that, don’t be surprised if Hibike! Euphonium becomes one of my favorite anime of the season. 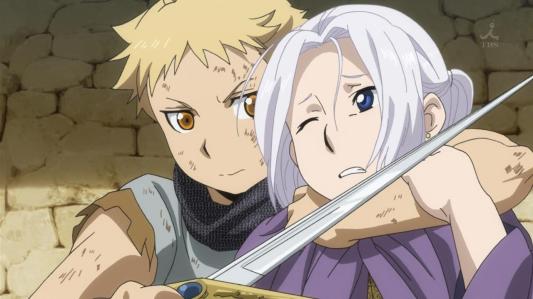 Given that his first episode was almost entirely a flashback of Prince Arslan’s youth, I can’t properly evaluate how I believe the anime will be for its duration given that the rest of the anime will be of a different time, and quite possibly, a different Arslan. However, Arslan Senki has a number of positives from this first episode that kept me captivated throughout. The most impressive to me is the distinctive and detailed setting of Arslan. Although I will probably have difficulties with the nations, geographies, histories, and technologies of the era, I am always passionate about rich and vibrant worlds, and the setting of Arslan is one that stands out to me. I can’t say much about the characters at this point, given that this episode was entirely within the past, but they seem rather tame and basic, though this does provide a good frame for which to construct characters and build their personalities and ideals throughout the series. The story… is something I can’t really comment on right now, but it isn’t one that impressed me right away. The art and animation are pluses, but they’ll truly be graded once the battles start, which are always intense for animators and artists. I have a positive feeling about Arslan, but it really needs another episode before I determine whether to keep it or not. However, based on this first episode, I’m leaning toward keeping it. 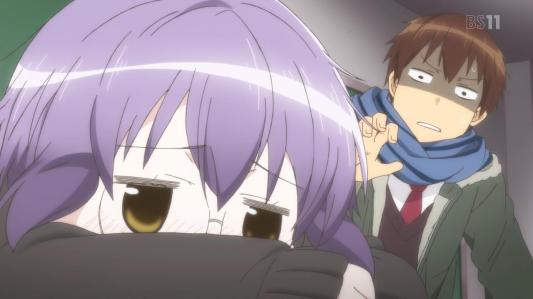 Is this called The Disappearance of Nagato Yuki-chan because Nagato Yuki has disappeared and they’ve replaced her with a doppelganger, Nagato Yuki-chan that, doesn’t really look or act like Nagato Yuki? Or am I being too harsh on this spin-off of the Disappearance of Haruhi Suzumiya that is only intended to be a lighthearted romantic comedy set in Nagato’s world where Nagato is able to express herself as normally as everyone else in this universe. As a whole, the episode really failed to impress me on its own individual merits, especially with the perceived deficiencies in Kyon and Nagato as lesser characters now. However, the novelty of seeing Kyon, Nagato, and everyone else in this anime has me curious and compelled to watch more. That isn’t to say I didn’t enjoy the comedy (I enjoyed some) or the romantic angle (it’s not terrible), but I think the primary reason for me to keep watching this anime, if I do, is that it is so vastly different from everything else Haruhi. Whereas in Haruhi, there was always some problem or issue or thing going on, this spin-off feels like a relaxed and sedated version of Haruhi… although that’ll probably change once Haruhi shows up. I really need more time to see how the series progresses and how it improves, but unless the second episode is a bomb, I’ll probably be keeping this.

I liked the first episode of Kyoukai no Rinne, and I want to like Kyoukai no Rinne, but I honestly don’t think I’d be able to handle this series for an entire season. What keeps me from committing to this series is the bland, greyness of the series; everything seems so average or ordinary. Every character was just so placid and calm that I felt disconnected emotionally with the series. In fact, if the characters had stronger or bolder personalities, I’d probably keep this… but until the anime can satisfy this deficiency, I can’t entrust myself to sit through Kyoukai no Rinne and enjoy it. However, beyond those aspects, everything else about the series is a positive. Although it’s true that the story in this episode was resolved with almost no obstacles, I do enjoy stories like these where characters learn about each other and solve outstanding debts or other supernatural things. The art, animation, and setting aren’t too entirely distinct, but they work for what the show is about. And although I complained plenty on the characters lacking emotion, I like them all in how they interact with each other and their roles in this story. I’ll need another episode for Kyoukai no Rinne to prove it can instill more personality and emotion in its characters. Once it does that, then I’ll be keeping Kyoukai no Rinne.

Kekkei Sensen is an example of an anime that tries too hard. There’s enough material in its characters, its story, and its setting to deliver a good or satisfying anime, but this first episode failed to utilize these aspects together and created a generic, formulaic introduction that just didn’t work. Perhaps the most damning example of this episode is the masked villain who mocked the city from his grandiose dining hall as he attempted to open a portal for demons to invade Manhattan. For a villain of this variety to work, they need to have a reason, a purpose, and an intelligence to match for their plans, but screaming and whining and showing nothing to the audience leads me to believe they have little to nothing planned for his character. The other characters were hardly better, with pretty much everyone but the male lead being unlikable at best. Other detrimental points were action-fanservice, unnecessarily badass fights and explosions just for the hell of it, and a scatterbrained narrative that jumped between too many time points and locations to form a coherent story. But not everything is bad with Kekkei Sensen, particularly the setting and the art and animation. The amount of detail in the backgrounds and cityscapes are amazing, and the fight that concluded this episode was easily the highlight of the episode. I want to see the series improve upon the negatives I listed before, but after watching the second episode and seeing no progress, I’m giving up hope on Kekkei Sensen improving and am dropping it.

This entry was posted on April 20, 2015, 4:44 PM and is filed under 2015 Spring, Anime, First Impressions. You can follow any responses to this entry through RSS 2.0. You can leave a response, or trackback from your own site.