Anime trending down this week: Nagato Yuki-chan no Soushitsu 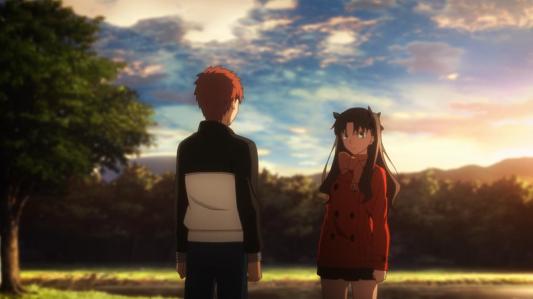 The background art is an essential component of every shot in every anime, and it can be used as an indicator for the quality and personality of an anime. Not only does the style and amount of detail matter, but so does the content of the background (scenery, skies, built environment) and how these shots are used within a scene. For Fate/stay Night, the backgrounds are frequently highly detailed with clean designs and exquisite detail. There is diversity in the content of its shots, too, helping to not only establish the locale of the scenes, but using the sky and lighting to denote the time of day while also helping establish the mood. Fate/stay Night also does an excellent job of using utilizing detailed backgrounds during scenes, too, especially scenes heavy in dialogue. Here, the backgrounds are particularly useful because, while the actual writing of the anime is characters standing around and talking, the shots can be diversified to show a variety of angles with few repeats. It’s a sign of excellent directing to avoid repeats in scenes like this since it is constantly providing new perspectives for which to view the scene. The example I’m thinking of is when Lancer approached Shirou and Rin at the abandoned church. Watch that scene again to get a better idea of what I’m talking about and why I believe the backgrounds to be a reliable marker of quality and personality in an anime.

While most ‘school club anime’ feel like an anime first and a school club second, Hibike! Euphonium is a school club anime that feels like a school club first and an anime second. To me, there is a considerable difference in Euphonium’s conduct and elegance that differentiates it from the rest of its school club anime brethren. For one, the structure of the club and the roles of the characters feels right. Perhaps most importantly, the president of the club, Haruka, actually feels like a reliable leader who would be elected the head of a club, especially from the way she presents herself among her peers and how she feels pressure and shame for the band’s sorry performance. In fact, when Noboru, the new music teacher, responded to Haruka, you could feel her character respond to the magnitude of the situation and feel the tension in the air. Oh, that’s another one too, there’s actually a faculty member present in the club. Noboru’s presence, although infrequent, helps in keeping the club aspect realistic, in how he doesn’t brush off the bullshit going on and tries to hold the club accountable for their actions. Not only is his presence here a plus, but his personality plays a significant role in keeping this more school club than anime. One last point about why Hibike! Euphonium is unlike the others in this genre is that it is developing its story around the school club and not solely dependent on comedy or nonsense. Having a story with substance related to the club goes a long way in supporting the school club feel of the anime. Overall, Hibike! Euphonium has the same sensation as some of my favorite school club anime, like Chihayafuru or Hyouka. If it can keep up this approach and quality throughout, who knows, maybe Hibike! Euphonium will join those two as one of my favorite school club anime of all-time. 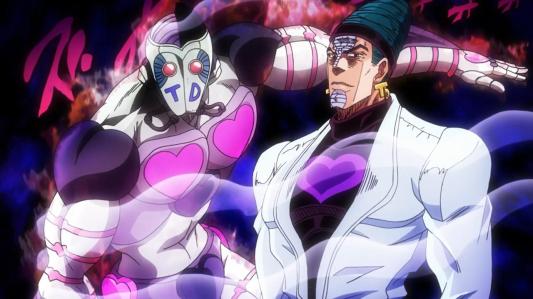 One area of criticism for Part III has been the lack of direct fights between Stands and Stand Users. While Parts I and II were dependent on the characters fighting each other to the death, Part III seems too comfortable with all these indirect fights. And while some battles have turned out great with indirect fighting, namely D’Arby the Gambler, most have not. And while variety is appreciated, I feel that the value of having more direct fights would dominate the value provided by the diversity in all these different styles of indirect fights. Now, that isn’t to say that I am not enjoying this battle fought on a video game console (because I am actually really enjoying it), but it doesn’t have that same lasting impression or emotion as would a direct fight would. Then again, many of these Stands are not designs or capable of surviving a direct fight between Jotaro and the others, but it’s something I miss from Parts I and II and why I feel that those areas of JoJo’s trump Stardust Crusaders.

The more I watch of Plastic Memories, the more I understand that these writers have no clue how a business works or even how most of the real world works. There are just so many inherent errors and inefficiencies with this office that I spend most of the episode thinking of how, if I were manager of this department, I would completely gut the office and rework all its policies. Nothing about this business makes any sense and the fact that all of these errors are correctable makes it even more irritating. I do hope the anime begins steering away from its office setting and back towards Isla dying from Robot Alzheimer’s, but that also has some major issues, too. 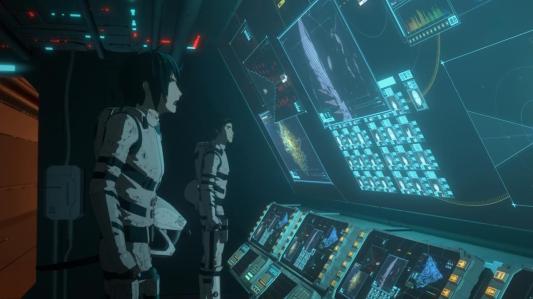 Since it took me forever to catch up on Sidonia, I never had the opportunity to talk about it as it aired last Spring. However, with its sequel airing this season, I now have the time and platform to write about it. What I appreciate the most about Sidonia’s 3D animation is that it always consistent and that the appearance and animation with the characters is dependably good. Although I still prefer 2D animation over 3D, I do appreciate that there are no variations or dips in the quality of art and animation with the characters. If you know how one characters looks once, you know how they’ll look throughout. Additionally, with the 3D animation, the camera is able to do more and the anime can incorporate more cinematography than most anime. With the increased budget of this sequel, Sidonia has done just that, with more shots incorporating cameras rotating, cameras following behind characters, and performing other difficult maneuvers that would otherwise be nearly impossible with traditional 2D animation. Of course, 3D animation will never surpass 2D animation for me, but I do enjoy the inherent advantages of 3D animation with Sidonia, and I feel that for an anime of this style and caliber, that 3D animation works well for its story, its characters, and its setting.