Back during Week 5: the indecisiveness of Plastic Memories and why it doesn’t know what it wants to be as an anime, how changing the powers in Yamada-kun to 7-nin no Majo changes the series dynamic, background characters beginning to differentiate themselves in Hibike! Euphonium, and cute girls being immune to still-image “animation” in Ninja Slayer from Animation.

Anime trending up this week: Yamada-kun to 7-nin no Majo

What was the point of Rin thinking to herself that she has no more runes remaining before launching her surprise attack against Caster? As far as I can tell, no one can read Rin’s mind, meaning that no one else could hear these thoughts besides Rin and the audience. And as we soon saw after that line, Rin knew that she was lying to herself because she clearly had runes to use. With those facts established, it seems fairly certain that Rin’s line was merely inserted to trick the audience. There was no purpose otherwise into tricking the audience into thinking Rin was out of ammo, only for her to surprise us with one final attack. Really, that line had no purpose in the story or to Rin’s character besides being a cheap and insincere tactic to surprise the audience. Sure, the trick worked, but it really distracts you from the scene when trying to understand why the hell Rin would think that line to herself.

Given that the Kitauji High School Music Club has a horde of students playing a variety of instruments, it was only a matter of time that some of the background characters separated from each other, forming tiers of secondary characters ahead of the tertiary characters. Perhaps the most apparent are the section leaders who were all introduced with names, titles, and voiced parts at the beginning of the episode. Still, some of the other characters are beginning to step apart from the rest, such as Yuuko Yoshikawa, the trumpet-playing first-year with the signature yellow bow in her hair. There are others appearing too, including the light brown, drill-haired trombone-playing girl and the black-haired French horn-playing girl with the red bow in her hair, but given the limitations of names thus far and the fact that I can’t link seiyuu to characters from the ED credits, they’ll be nameless for now. Still, there are characters emerging from the mass of students seen at the beginning of this anime and each person is beginning to create an identity for themselves. They probably will never play a significant role in the anime, besides helping differentiate the instrument groups and providing scenes away from the bass section, but it’s nice to see characters like these begin to develop, even if it’s just a little, since it helps add to the foundation of the Music Club in Hibike! Euphonium. 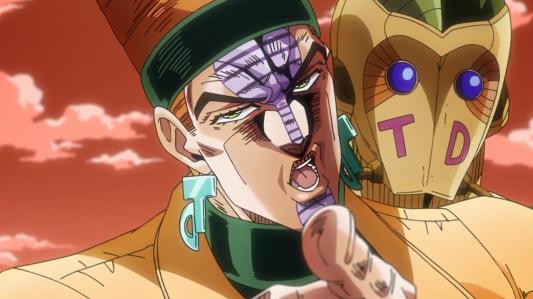 Although this isn’t true given what we’ve seen in future episodes, it seems as though the cute girls of Ninja Slayer from Animation are immune to the still-image scenes that were a stable of the first two episodes. Of course, cute girls are a significant part of an anime of this quality, so it’d be strange to not make them the focus of the artwork and animation as we saw in episode 3; every scene with Yamoto was animated normally and the scenes with the guys were the still-image scenes where animation ceased to exist. I can’t really blame Trigger for taking this approach with its characters, but it just seems funny to see Yamoto animated normally while the rest of the episode was still-images of characters fighting grand ninja battles. 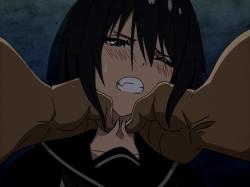 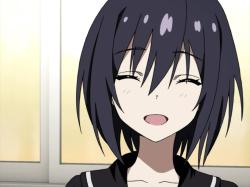 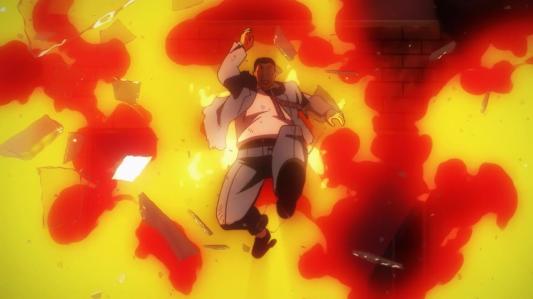 There is dumb and then there is a level beyond dumb, called “beyond dumb”. And though it sounds like a bad thing, being “beyond dumb” is actually quite fun as we saw with the fourth episode of Ore Monogatari!! For examples of each, the steel beam falling in episode 2 was dumb because it felt cheap and out-of-place. It didn’t really add anything meaningful to the series and wasn’t enjoyable to watch (borderline cringe-worthy, in fact). The restaurant fire and explosions were even more out-of-place in this series, but it passed that threshold of dumb and became something entirely different; something genuinely entertaining. That whole time, I watched the scene with a smile on my face wondering just where the hell this anime could go next. It was so irrational and spontaneous that it defied the logic of the series, getting up in our faces and screaming, “ARE YOU PAYING ATTENTION?” That being said, I don’t want to see these extraordinary and extravagant events become a stable of the series because then it’d detract too much from its sweetheart romance. Too many of these scenes and it’d steal the focus. Some random bullshit like this restaurant scene is fine, but too much and it begins to subtract from the anime as a whole. 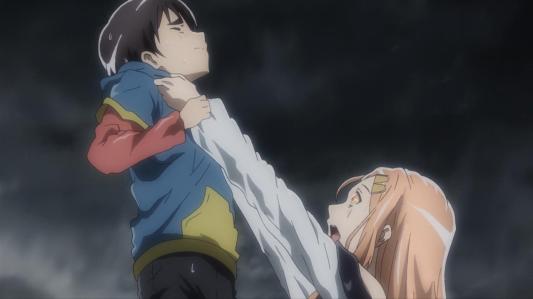 Plastic Memories is an anime that doesn’t know what it wants to be. The first two episodes were a touching pair that introduced us to a depressed robot that works for a robot funeral service with some charming slice-of-life elements and appropriate humor. The third episode decided to be a romantic-comedy episode that seemingly ignored what little progress the anime achieved in the beginning for clichéd jokes around Isla’s character. The fourth turned its focus away from Isla and toward Marcia, revisiting its slife roots with a heavy dose of drama… only for the fifth episode to come around and turn the series into a sci-fi action one complete with everyone chasing after a berserk robot with futuristic weapons and arguing with a paramilitary security organization. In just five episodes, the anime has gone back and forth between several different genres, eroding what little progress we’ve seen and keeping us guessing to where the anime will go or what it will be about. To me, the anime is about Isla but we’ve essentially ignored her these last three episodes with content that is essentially wasting space between the first and last episodes. It goes back to what I wrote about for episode 4, that the anime has serious issues with its writing, and the jump from slice-of-life and drama to sci-fi and action seems to emphasize it better than complaining about the details of the setting. It’s bizarre, how inconsistent this series is, and it leads me to believe that the anime can’t and won’t deliver a quality story in the end.

Given the different powers of the different witches, it seems as though the dynamic of the anime will change based on whatever power Yamada has. And given that the anime dynamic will change between these different powers, that means that Yamada-kun and the Seven Witches will remain fresh as it progresses through these different powers. Although I enjoyed and always will enjoy body-swaping in anime, especially this one, I am thankful the anime will explore different powers like the one shown in this episode. And given that there are five others, that means we’ll see five other powers that will influence the stories of each, though I suspect the anime will run out of time before then. Still, I am intrigued by how each power ultimately decides the genre of anime and how the characters interact with each other, so I’m excited to see what the rest of this anime does with Yamada and the others.