This week: why combining business with school has failed for Classroom Crisis, highlighting a major weakness for Chamo in Rokka no Yuusha, similarities between the Orihara family with the Araragi family for Durarara!!x2 Ten, and major changes (again) in the OP for Gakkou Gurashi.

Best episode of the week: Rokka no Yuusha

Anime trending down this week: Charlotte

Finally, in the eighth episode of Rokka no Yuusha, we’re able to witness the tremendous and terrifying power of Chamo, the Saint of the Swamp. Chamo is capable of summoning monsters, the bodies of the kyouma she’s consumed, by forcing herself to vomit the contents of her stomach, the ‘swamp’ where these monsters dwell. Of course, after seeing the strength, ability and numbers of these monsters, it’s no wonder that Chamo is considered the strongest of the Six Braves… but, that’s only if she’s able to summon her minions by vomiting them and allowing them to form. I question how Fremy lost to Chamo in their match since Chamo takes a good 20 seconds to prepare for her fight, in which case she is completely defenseless. The fact that Fremy couldn’t get a shot off between the time Chamo started summoning her monsters to the time they were out leaves me dumbfounded. Of course, Chamo may have previously summoned her monsters before facing Fremy, but we haven’t seen Chamo wander with her monsters out at any other time in the series. Additionally, Chamo relies on her foxtail, the green plant she uses to induce emesis, to summon her monsters, so any compromise to her tool would greatly hinder her fighting ability. If it gets cut or bent or broke or limp, then Chamo is out of options. It would be akin to Fremy losing her gun or Goldof losing his sword except it takes a lot more to break a rifle or greatsword than a tall piece of grass. So, given these realities, it appears as though Chamo might not be as invincible as previously portrayed. In reality, she’s the strongest fighter once she’s successfully summoned the monsters from her swamp… but that’s only if she can survive the 20 seconds it takes to summon her monsters.

Okay, so, all of Dandelion has been about the election, right? About how the family members are doing their best to win the election? Okay, so, how exactly does the family work after the election? Like, what’s going to happen to the family structure and the relationships between the siblings? I’m actually kinda curious to see what life is like after the election since the whole dynamic of the series will change, especially if it’s someone like Hikari or Misaki or Shiori winning the election. Will everyone still treat them the same way and, likewise, will they treat everyone else the same way? Like if Akane wins, will everyone still cater to her social anxiety and other issues the same way, especially if she’s on official business and whatnot? And if it’s someone like Hikari, will they tell her it’s not a game and that she’ll have to draft laws regarding healthcare, national defense, economic policies… wait, how exactly does their country work anyway? Maybe I’m going too far on a tangent here, but I am curious to see how the series changes for the family after the election is settled and their country has a new monarch.

In acknowledgment of Nicolas’ character, I watched the first half of this episode without sound. The reason I did that is because I wanted to focus more on how his character is depicted and how communication is portrayed when Nicolas is around. Unfortunately, the episode did not focus on Nicolas as much as I had hoped, but it still provided a few examples of how people communicate with him. For example, people always face Nicolas when they’re talking to him, so that he is able to hear any sounds and see their lips. Of course, Nicolas hears with his eyes, so this made sense. There weren’t really any noticeable mistakes either, such as Nicolas responding to a character without him being able to see and read the lips of another character. If I were to make a critique, it would be when scenes were unreasonably dark, which would make it difficult for Nicolas to read lips or even sign language. What really stood out to me were the side conversations. Since I could see that Nicolas wasn’t looking at them, I could better understand that he was missing everything that was said despite him being adjacent to the scene. I won’t say I learned much about Nicolas or pretending to be deaf with this experiment, but the one lasting impression from this experience is that Nicolas is really cut off from most of the communication and story in this anime. There is very little and limited communication with him.

The subtle changes in the OP are one of my favorite things about Gakkou Gurashi. The first major change was between the first and second episodes… and rightfully so. But between episodes 6 and 7, the OP faced another dramatic shift, thus becoming the fourth different opening for Gakkou Gurashi in only seven episodes. The notable changes were that the outside shot of the school was changed to dusk and more zombies were present (although this should go against one of the themes of the anime with the zombies having memories and living their daily lives meaning more zombies would be away from school at sunset); Megune’s face was erased from the dryboard in the club room; Megune was replaced in the montage of the side characters; the photos of the daily lives of the girls have been replaced by their nightmares; and the final scene where Yuki is running in space has become a darker shade of purple. Of course, many of these changes are subtle, so it may have been missed by many viewers, especially by those who skip the OP, but it does show the progression and evolution of the series as it becomes more of a horror anime. I always appreciate details like this in an anime since it really highlights the creativity and ability of the team, and it does well to encompass the changes we’ve seen in Gakkou Gurashi thus far. 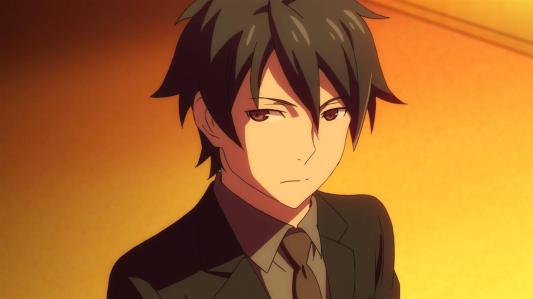 I am conflicted with Classroom Crisis. On one hand, I welcome an anime attempting to do something distinct and original with its hybrid “real world business” blended with “typical Japanese high school”. On the other, the execution and directing is sloppy, with the two sides integrating like oil and water. Classroom Crisis wants to be taken seriously with its political drama and intricate character relationships in a business setting, but it fails spectacularly given that almost all of the time, story, and characters aren’t even relevant to Nagisa or his story. You can’t devote 10% of the anime to the main story with the rest being beach episodes and school festivals. You just can’t. In reality, the main story of Classroom Crisis should be about the experimental rocket since a dozen characters are directly related to it and it has taken up over half the anime to this point. Unfortunately for me and Classroom Crisis, it can’t be the main story, primarily because there has been no progress on the rocket, the only conflict is the lack of budget, and that would just make too much sense. Instead, an unnecessary amount of time is spent with these executives and politicians and union leaders related to Nagisa and only Nagisa. Why even have the A-TEC around if they contribute nothing to Nagisa and his story? It’s as if two completely different anime were combined because they knew the business anime would never sale and the school-setting anime was too boring. Like I said, oil and water. Classroom Crisis doesn’t know what it wants to be, and the anime is suffering greatly as a result.

This entry was posted on September 4, 2015, 5:56 PM and is filed under 2015 Summer, Anime. You can follow any responses to this entry through RSS 2.0. You can leave a response, or trackback from your own site.