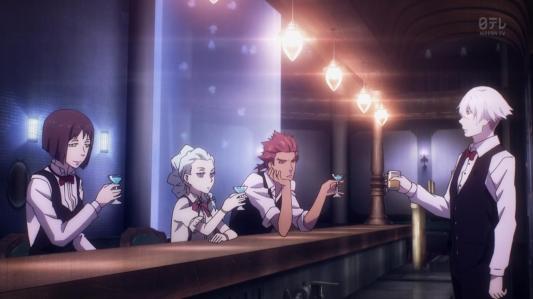 What makes the Quindecim my favorite setting in anime is primarily due to its atmosphere and its bearing on the story. The art and setting for Death Parade both deserve credit for the aesthetics and ambiance of the Quindecim, especially with the elegant and sophisticated details gracefully portrayed. However, the bar could be drawn with any level of detail should the setting have been different. Look no further than the Viginti, where Ginti worked, or even Bar HOMRA in K, which are other anime bars with stunning aesthetics. However, should Decim and Chiyuki been stationed in such establishments, it would’ve failed to capture some of the charm of Decim or the ominous atmosphere with the various participants. Yes, the mood from the Quindecim is different because of its colors, its props, its use of space… from the details like the ornate stained-glass behind the bar top, to the bamboo garden and pond near the elevators, to its tranquil living quarters, to the open auditorium where the games were held. The design and style of the Quindecim had a significant impact on its story and characters, though I had always wondered whether the Quindecim was always this classy and high-end throughout its existance.

But perhaps the greatest element of the setting was the arbiter system and society in Death Parade. Really, Death Parade focused on its central theme of how to properly evaluate and judge humans, both from a humanistic perspective (Chiyuki) and from an arbitrary perspective (Decim). However, the story and the characters only successfully evolved due to the arbiter system in place and the social hierarchy between Decim, Nona, and Oculus. For example, you could feasibly write an anime retaining many of the same elements, including the characters and theme of how to evaluate humans, but keep it among the living in Tokyo, such as with Chiyuki and Decim gossiping behind the bar top. Or you could write in an urban Japanese high school where they’re matchmakers picking dates for a certain boy or girl. 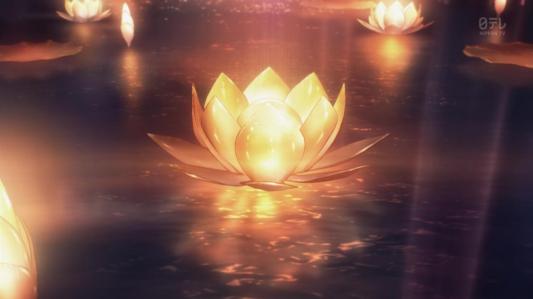 There are a thousand different settings for which to write an anime like Death Parade, but it’s the whole notion of death, afterlife, the asinine games as a method to judge, the strict protocol that Decim and the other arbiters adhere to, and the whole notion of Chiyuki’s life that made Death Parade such a powerful and provoking anime. Really, Death Parade did phenomenal in every category for which I evaluate an anime, but it’s the setting that elevates it to greatness. To me, the setting of Death Parade is arguably the best I have seen all year and that’s the reason why I want to celebrate it for Day 9 of my 12 Days of Anime for 2015.

This entry was posted on December 17, 2015, 10:55 PM and is filed under 12 Days of Anime, Anime. You can follow any responses to this entry through RSS 2.0. You can leave a response, or trackback from your own site.