Given the lighter line-up this Winter and the fact that my life is calming down, I plan to return to publishing Weekly Anime posts on a regular basis after taking most of 2015 off. However, everything is still tentative right now but things look better this season than any time since Summer 2014.

Boku Dake ga Inai Machi is certainly one of the most promising anime of the season and easily has the most potential of the shows I’ve watched thus far. What I passionately enjoyed about Boku Dake ga Inai Machi is its attention to detail and its consistency among its themes, both of which are hallmarks to superb directing. The angles and durations of the shots, particularly when Satoru reunites with Sachiko and again when those two and Airi have curry, are particularly powerful at establishing mood, dialogue, and chemistry between the characters rather than on the individual characters themselves. You even see it in quick shots, too, such as when the truck is about to hit the young boy in the crosswalk (angled down to make him look scared and powerless) or in the hospital room (Satoru was in the light the whole time, Airi was in the shadow). Furthermore, the theme of children is consistent throughout the first episode, especially during the two time loops when Satoru and Sachiko search their settings. These are the signs of a director with a vision for this anime, so it’s particularly delightful that Boku Dake ga Inai Machi has such robust writing and dialogue to support this vision. Given the conversations thus far, the characters feel more human than archetypes, and the way they talk sounds natural rather than scripted. And in terms of the art work, I find the character designs to be extremely enjoyable, especially since they can make a 52-year old mother look like that. Boku Dake ga Inai Machi is an anime with a sturdy skeleton (writing), a solid exterior (art), and an insightful brain (directing). All the parts are here to make this be a successful anime, and I’m very curious to see what it can do this winter. 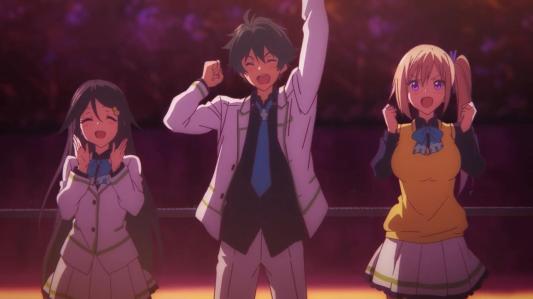 Although I initially passed on Musaigen no Phantom World after watching the PV and reading the synopsis, my morbid curiosity got the best of me, and I watched the first episode. And though my original thoughts were spot-on, that it’d be a rather shallow, ecchi anime, I was wrong on how I’d react to it: I didn’t hate it. Instead, I found myself enjoying bits and pieces of the episode, which essentially was the opening fight and one or two jokes elsewhere. Musaigen no Phantom World really does well with everything visual, so the anime is fun to watch if you like fighting and ecchi content, but the story is incredibly shallow and the characters are uninspiring. I don’t think there’s anything more to this anime than what we saw in the first episode with a schoolgirl beating up some monster in her buruma or bouncing her giant breasts to defeat another. If the anime can manages to improve in episode 2 and feature something other than constant fanservice, I might keep it, but otherwise, I’ll place this anime back where it belongs. 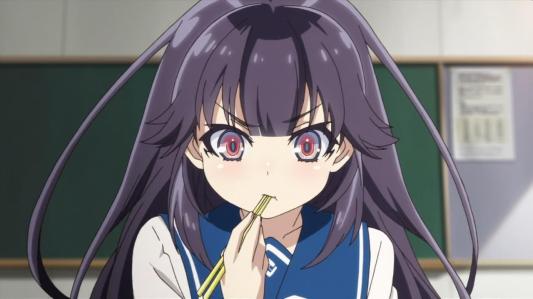 The first episode of Haruchika was tolerable at best and boring at worst, so it’ll get another episode before I decide whether to keep this anime or not. Haruchika didn’t do any one thing particularly well, but features satisfactory writing, a charming art style, and a main character strong enough to carry the anime when nothing’s happening. Where Haruchika could improve is… nothing really happened at all this episode. In fact, it was a rather lame start to the series since the whole mystery never really was resolved as the whole exchange is between a character that never comes back and another who barely even shows up. I find the setting to be a strong negative in an anime like this given that… it’s another school club anime that offers nothing new. However, the anime kept my attention span focused for a majority of the episode, and no, that wasn’t due to Chika’s hypnotic eyes (thought that may be part of it). I am curious to see whether this anime improves or if we’ll go through 4 episodes of introducing new characters with weird mini-mysteries each time and slowly “working” (you need to use sarcasm when talking about a romance progressing in an anime) on the love triangle between Chika, Haruta, and Kusakabe-sensei. And no, I don’t know for sure whether Haruchika will do this or not, but I’ve seen enough mediocre anime to know where this is going.

I had some hope that Active Raid might be decent, given that it’s a police anime with mecha and a catchy OP song… but no, Active Raid is outstandingly awful. Yes, even I’m impressed at how bad the first episode of Active Raid was. Nothing, absolutely nothing in this anime works. For example, the characters all have strong, conflicting personalities but the writing does no favors and they come across as exaggerated and theatrical when paired or grouped with each other. Another is that the process and policies of the police unit makes no sense given that the criminals killed probably a dozen police officers and they only sent 2 people out to talk to them. Yet another is the art. Are the characters able to show emotions with their faces? The art was subpar at best, but the faces struggled to show even the slightest bit of reaction with everyone looking bored and uninterested from start to finish. The silver lining with that, though, is that I could always remember the emotion I felt when watching Active Raid: bored and uninterested from start to finish. But yeah, I like the OP song, so it’s not all bad for Active Raid… and fortunately, I can listen to it any time I want without needing to bother with another episode of Active Raid again!

This entry was posted on January 12, 2016, 9:57 PM and is filed under 2016 Winter, Anime, First Impressions. You can follow any responses to this entry through RSS 2.0. You can leave a response, or trackback from your own site.