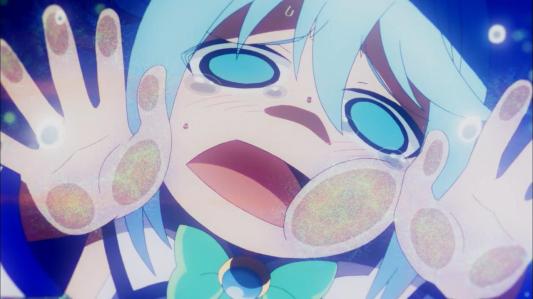 Since I do not write weekly posts for the second week of the season, primarily because many shows air their first episodes in that time, I’ll just provide a brief update on my thoughts on the second week here since this is so late. Most of the anime that impressed me in Week 1 have regressed a bit in Week 2, save for Boku Dake ga Inai Machi which is easily the best new show of the season. Of the sequels, Durarara!!x2 Ketsu is opening to a strong start, and I appreciate the change in direction for Utawarerumono: Itsuwari no Kamen. Still, I am a little disappointed in the performance of some of the new anime that I am keeping, but it’s only the second week of the season. Who knows, maybe one of these anime below will end up being the most impressive and most improved of the season? Let’s see just what I’m planning to do with these shows this season…

Nothing here, not with these anime today.

Hai to Gensou no Grimgar 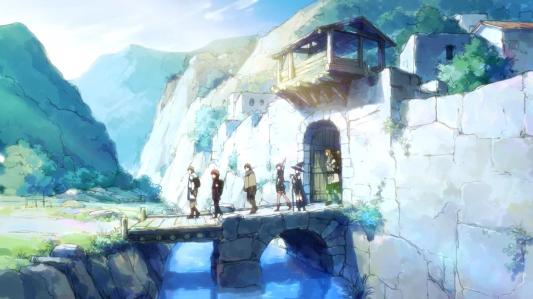 There are quite a few shining qualities to Hai to Gensou no Grimgar, but there’s an equal amount of concern after watching the first episode. For the positives, first and foremost is the art, which features stunning and picturesque backgrounds as vibrant watercolor paintings over pencil sketch outlines. Furthermore, the use of various lighting brings out depth in these shots, building the setting to feel like a world that the people live in rather than just a layer of things behind the walking, talking characters. The second positive worth mentioning is the personality and demeanor of the fantasy world. While there are literally a dozen modern-teenage-kids-stuck-in-fantasy-world anime these days, Hai to Gensou no Grimgar feels genuine given that the kids are inexperienced and awful at combat… which is what you’d expect given the situation they’re facing. I’ve enjoyed it thoroughly in the first half, during the goblin battle. The latter half is where things started to drop off and the drawbacks of Hai to Gensou no Grimgar revealed themselves. Of note are the characters and the writing. It appears that the main party of this anime will be the six characters that were featured in the second half of the episode, which is my primary concern with this anime… I’m bored with them at best and am irate with them at worst. Of course, the anime has a chance to redeem itself if a few of these characters die, but considering that this is the core unit, I can’t feel inspired with any of these kids. Then again, that might be the fault of the writing which paints these characters as plain and basic. The dialogue doesn’t help either, as it is easily the most discordant and displeasing element of the anime. Fortunately for me, the art and setting are likely to remain unchanged, and there’s always a chance that the characters and writing improve. I’ll likely give this another episode or two to see if it picks up, but I don’t think I’ll keep it the introduction was a fluke and the anime progresses on and on like the second half of this episode. 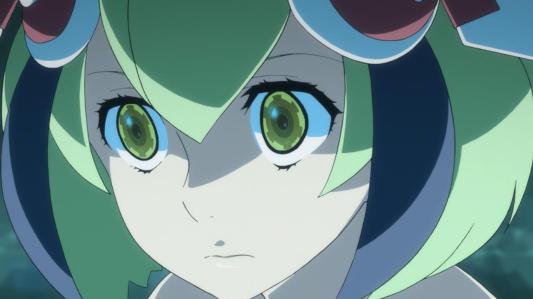 What leaves me uncertain with Dimension W is that, in the first episode, the two main characters were separated throughout whereas the rest of the series will have these two characters paired together. With such little time to see them interact together, other than their rousing fight, it’s hard to judge their chemistry together and how they’ll function as a team together. Fortunately, the two seem to be fine when they were independent of each other, each having their own stories and struggles, though I do hope Mira isn’t whiny and mopey throughout following the death of her father. One of my primary concerns moving forward is that I fear the anime will be formulaic each week, with the two characters looking for illegal coils each week and slowly moving toward their individual goals… but I’ll cross that bridge when I get to it. The other remaining elements do point in the right direction, such as the visuals, the directing, the setting, and the sound, but they’re not enough to convince me to keep it after this one episode. Once I can see how the characters function when they’re teamed-up together and whether this anime follows a set formula each week, then I’ll make a decision on whether to keep this or not. But, for now, it’s undecided. 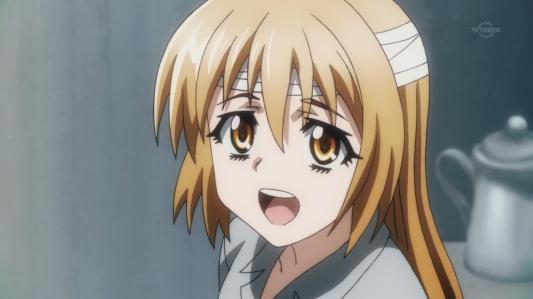 Of all the anime this season, Schwarzesmarken is the hardest to read. I watched it, and… really could not formulate an opinion or initial impression. And no, I wasn’t bored with it either, especially during the mecha battle to start, but I felt emotionally detached from everything going on. I did not feel much of anything after the first episode either and desperately need a second to figure out what I want to do with this anime. Hopefully then, will I have enough of an impression and enough information to decide whether I want to keep this or not. 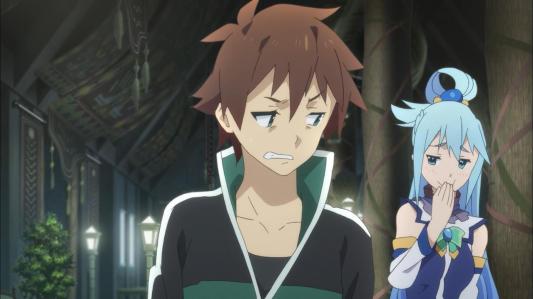 Kono Subarashii Sekai ni Shukufuku wo! is a perfect example of how chemistry and comedy between characters is certain to catch my attention. What I enjoy the most about Kono Subarashii Sekai ni Shukufuku wo! is that it’s strengths are the two most important qualities of an anime for me: the characters and the setting. With the main duo possessing strong personalities and fascinating charisma, I find their interactions and exchanges to be charming and amusing, a real joy to watch. The fantasy setting is another strength too, with its obvious tribute to fantasy JRPGs, and the directing has been superb given its pacing, especially with that montage at the end. However, I do want to see more before committing to this anime, considering that they plan to add two more characters who have the potential to destroy the outstanding chemistry between Kazuma and Aqua. Beyond that, I am curious how the story develops now that everything is set and the two are stuck in this fantasy realm. I will admit that the art and animation are a bit subpar considering the quality here versus some of the other shows I’m keeping this season, but that is not reason enough to drop it. I think after one more episode, I’ll end up keeping this, unless the new characters spoil the chemistry between Kazuma and Aqua or if the story goes to shit and becomes a harem or something stupid.

Ao no Kanata no Four Rhythm 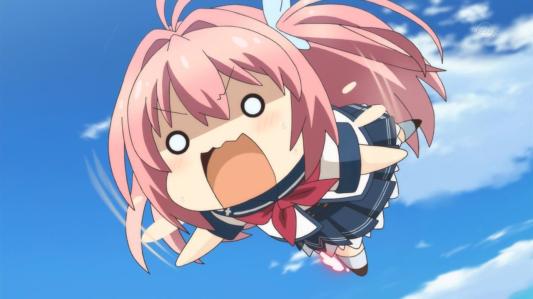 Although Ao no Kanata no Four Rhythm is being dropped, I am still considering it as a candidate for watching on 4x this season. To put it bluntly, I enjoyed bits and pieces of Ao no Kanata, but the overall product was a snore, and I don’t think it’ll get better given what the rest of the series holds. However, I figure if the anime were a short, like a 5- or 7-minute anime, I might consider keeping it around given its cute, fun characters and the flying shoes gimmick. Because of that, I’ll considering watching the episodes on 4x and hope that cures the tedium that overshadowed this first episode.

As for the first episode, it progressed similar to Asuka’s training, with many ups and many downs (but no heroic win at the end, unfortunately). The cast is above-average for these types of anime, and I do enjoy that the focus of the anime is on Asuka and not a male lead. I found the setting and style to be charming more than not, with the comedy and chibi art being highlights and the flying shoes to be mildly interesting, piquing my curiosity to how they’ll use it for themes and its story. That being said, I couldn’t help but find myself generally bored throughout. Maybe I’m just burnt out from trying two dozen anime in about a week, but I had trouble genuinely caring about the characters and their story. And, because of that, I think it might be a decent candidate to 4x this season since I can pretty much skip most of the text and whatnot and enjoy what I enjoyed with this first episode. I know, it’s not the best option, but it’s better than the alternative and being done with it right here and now. 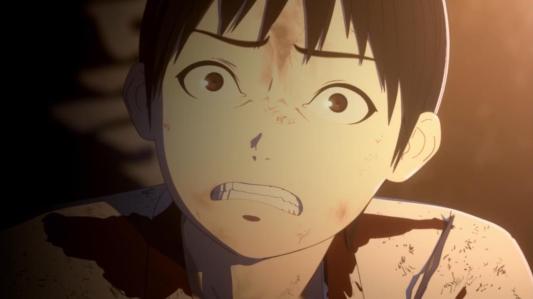 Ajin: Demi-Human actually had a decent first episode, but until a dependable subber releases it regularly, there’s no point in trying to watch Ajin this season. Until that happens, I might as well consider this dropped from the list.

This entry was posted on January 24, 2016, 1:07 AM and is filed under 2016 Winter, Anime, First Impressions. You can follow any responses to this entry through RSS 2.0. You can leave a response, or trackback from your own site.