Last week: the re-sensitization to death in Kakumeiki Valvrave, the complexities of saying ‘farewell’ in Suisei no Gargantia, individual versus team karuta matches in Chihayafuru 2 and a thrilling, informative look inside the police department in To Aru Kagaku no Railgun S.

END_OF_DOCUMENT_TOKEN_TO_BE_REPLACED 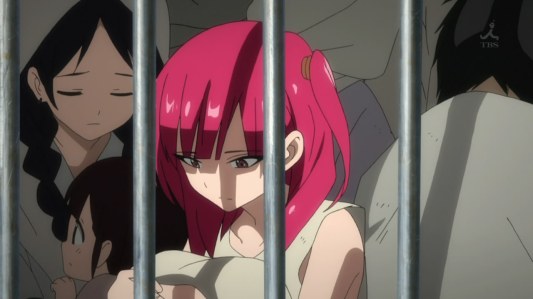 The setting for Magi is a dream-come-true for anime fans like myself, a stone-structured Arabic metropolis nestled in some barren, sunbaked deserts and beleaguered with danger, magic, and adventure around every street corner.  For the characters residing in this world, however, it’s nothing more than a living hell.  It’s a society wherein class dictates your fate and (lack of) fortune and any challenge against this system is met with severe and crippling punishment.  Still, this doesn’t stop Alibaba and Aladdin from confronting the established society of Magi though their difference in power and knowledge lead to completely different results.

END_OF_DOCUMENT_TOKEN_TO_BE_REPLACED

Posted by avvesione in Anime, Last Exile on February 16, 2012

Unlike the friendship between Fam and Giselle, one that has endured numerous hardships and still remains strong, the relationship between Fam and Millia is a bit more complex.  Should you ask either character, the answer regarding their friendship would be that they are dear friends yet their actions don’t always support these words.  Perhaps the greatest obstacle in what’s keeping this relationship to be one as close or resilient as Fam’s and Giselle’s is an issue that extends beyond the difference in class and status between the princess and the pirate.  What’s hindering the friendship of Fam and Millia is that they don’t treat each other as equals.