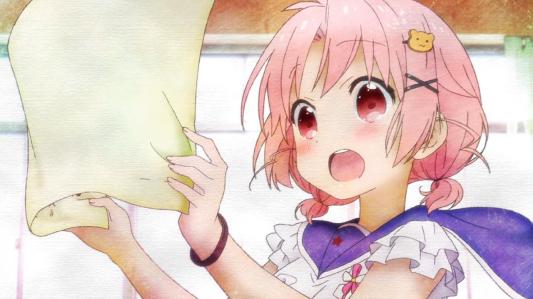 Last week: two things I wish they did more of in Gakkou Gurashi, celebrating the rural setting of Non Non Biyori Repeat, deliberating the lack of anime voice acting roles in Sore ga Seiyuu!, and the lack of Maya Matsumoto in the finale of Working!!!.

END_OF_DOCUMENT_TOKEN_TO_BE_REPLACED

This week: why Adlet, the strongest man on Earth, is the weakest brave in Rokka no Yuusha, questioning the origin of Yuki’s psychosis in Gakkou Gurashi, defending Haruka’s egregious probability errors in Joukamachi no Dandelion, and complaints about Ayumi’s lack of character development in Charlotte.

END_OF_DOCUMENT_TOKEN_TO_BE_REPLACED

This week: comments on the mature visual styles of Shin Sekai Yori, a phenomenal display of emotions in Jormungand: Perfect Order, a return to familiarity in Medaka Box Abnormal and thoughts on a possible and awesome ending for Chuunibyou Demo Koi ga Shitai!

END_OF_DOCUMENT_TOKEN_TO_BE_REPLACED

Posted by avvesione in Anime, Sakamichi no Apollon on May 27, 2012

The seventh episode of Sakamichi no Apollon presented enough evidence to materialize a subtle theme during the concert at the end.  No, it was not the latter musical performance, the one composed of equal parts outstanding, phenomenal, and influential, but the former one, the performance that proves that high schoolers have always had a terrible taste in music.  Upon learning that Seiji’s motivations to becoming a rock icon are grounded in his belief that it is a means to support his impoverished family, the ever-present but habitually disregarded theme of delusion revealed itself again and stronger than ever before.  While delusion is an unremarkable subject in anime, especially considering that Apollon deals with high schoolers, it is worth noting it’s ubiquitous throughout the main cast and to virtually every character in the series.  Though common and simple on its own, the sheer amount of delusion in this anime adds up to make it a rather noticeable theme.  But what, if any, does this really mean for Sakamichi no Apollon?