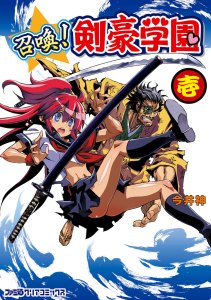 Imai Kami’s premier manga, Needless, concluded with Chapter 114 in June of 2013, following a cherished 10 year run. In December 2013, Imai Kami’s other long-running manga of 7 years, Shirasunamura, also concluded. At the time Needless concluded, Kami expressed interest in taking a well-deserved break before returning to draw the latter half of Needless with his planned continuation called Needless 2. However, since that summer, Kami has been quiet as a mangaka, only working on 4koma comics for Arcadia magazine and releasing an art book in 2014. It wasn’t until January 2015 when I discovered that Kami had been working on a new manga in Arcadia magazine, Shoukan! Kengou Gakuen, with the first volume being available in February. Unable to find any useful information online, I waited patiently for the manga to be imported from Japan. Imai Kami’s new manga, Shoukan! Kengou Gakuen will be the focus for Day 1 of my 12 Days of Anime for 2015.